Bah humbug and all that.

Time for another update on the life that I lead.  Still working nights at Tesco to pay the bills.  Still failing to win the lottery.  Still painting for other people more than for me.  Thanking god that the US election is finally over and the news can be about something else.  Do the Americans care about who gets in over here when we have an election?  I doubt it somehow, but we are subjected to endless debates about the US election.  Maybe its just me though, maybe the rest of the British people do care.

Maelstrom games seem to have gone completely, taking my money with them.  From the stories on various chat groups it appears that the nice man in charge knew it was going, but still took peoples money!  I would say what I think of him, but kids may read this.  Suffice to say my thoughts on this man are not pleasant.  I have reordered the guns I need direct from Battlefront, but that has now been 3 weeks with no sign of any delivery yet.  I am rapidly coming to the conclusion that this gun order has been cursed by the gods of wargaming.

I have managed to do some painting around working nights and feeling ill.  Two lots of 32 15mm Napoleonic Dutch-Belgians (one line and one militia unit) and 24 Perrys Wars of the Roses figures for the Christmas game at the Devon Wargames Group.  Still have more Napoleonics to do, as everytime I paint any he sends me more than I have painted.  Newest arrivals are Dutch-Belgian cavalry and more infantry.  Two 40 figure units of line infantry and 6 units of cavalry, plus 2 batteries of artillery.  Better to have too much than not enough.

I do have another unit of Wars of the Roses to do as well, but they are for me so may have to wait a bit.  Four units should be enough for my little lot in the game.  Plenty of levy with little of no ability to hurt anyone, led by a complete fool.  That's the way forward.

In other news, I have decided to get rid of my 25mm WW2 figures and vehicles.  I have used them once in about 3 years now, so will sell them on and reinvest the money in finishing of my AWI forces and getting some more 15mm WW2.  15mm is becoming my favoured scale for most games now, although some 25mm will still be kept (War of the Roses, Ancients, Dark Ages and Cold War).  My British Paras and German Panzergrenadiers will soon be on ebay though.  Here are a couple of pictures just to tease you. 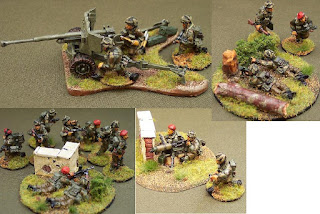 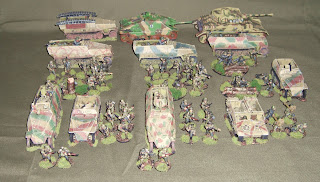 There are more Paras than shown here, but I never got around to taking pictures of them all.  There is also some armoured support in the shape of Tetrach tanks.  Ooohhhh, scarey.

I enjoyed painting them, but can't justify keeping them anymore.

If anybody is interested in them then drop me an email and I can send you some bigger pictures and a full list of what I have.

Well, back to the grindstone again now. Have fun.
Posted by jcralls at 12:07