Warbases modular buildings were a Christmas present from my sister and her husband. Having seen them on Olicanalads blog, I thought I would ask for them as they looked so good. They are excellent, both as value for money and how they look when finished. 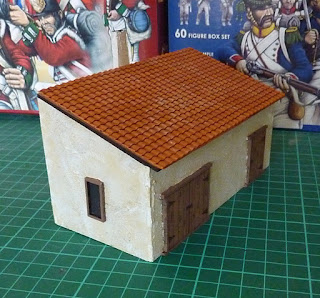 I received a total of 8 buildings, 2 of each of the types that Warbases make. They are laser-cut mdf, with interlocking walls and some have brickwork etched into them, so it looks like the plaster has crumbled away. They all come with a selection of doors, windows and shutters, so the variety is endless. A bit of filling along the edges, I used decorators caulk, to cover the seams and they were ready for painting. I painted them with a cheap tube acrylic from a local branch of the Range, stippled on with a fairly stiff brush.

The first one I did became a blacksmith type building, with 1 large and 1 small door, plus a small window at each end and an added chimney made from foamcore. The roof is a Wills pantile sheet, which is cunningly exactly the right size! 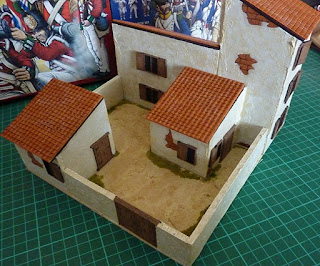 Then I got a bit more creative and made a small compound. Three buildings put together made a nice house, with another of the small buildings as a shed. All on a plywood base, with walls of foamcore. All told this setup has cost £10 for the buildings, £2 for the plywood and £3 for the roofs. The paint and grass I had already, so all in all its not bad for £15. Technically its a bit less than that as I used 2.5 sheets of pantiles from a pack of 4 sheets. The door into the courtyard is 2 double doors from the buildings back to back. The only thing I am thinking of doing is capping the walls with some form of stone. The buildings are loose, so can be removed to be used elsewhere or to show occupiers.

Well, there they are anyway. Cheap, easy to make and simple to paint up. I will get some balsa wood as I like the additional bits Olincanalad put on his, but that will be another day.
Posted by jcralls at 11:14 1 comment:

Spartan Games came out with Dystopian Wars a while ago and myself and Gus got into it after seeing the models one day. They are lovely, very sharp cast resin with detail that is amazing. There are four main factions, British, Prussian, American and Japanese. Being average wargamers we decided to do two fleets each. Why only do one when there are four available? Gus took the dastardly Prussians and the irritating Americans, leaving me with th 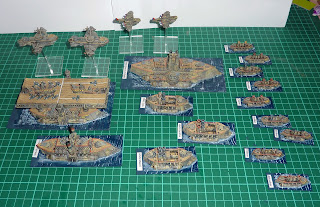 The fleet box gives you enough to play the game, with a battleship, 3 cruisers, some frigates, 2 bomber and lots of fighters. Of course, that wasn't enough so we promptly bough dreadnoughts and carriers too. What can I say, they are big and pretty and new and stuff.

After playing a few games we had a fair idea of what worked for different fleets. The rules are easy to pick up, but it needs careful consideration to get the best out of a ship. 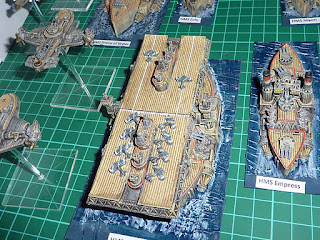 The Germans have special generators and weapons, while the Americans have a very good long range firepower due to rockets and rapid fire cannons. The Japanese also have rockets, but lack the long range guns of the yanks. What they do get is a mechanical squid, which is awesome!

The fleet I completed first is the Royal Navy of her Majesty Queen Victoria. Obviously by far the best navy in the world because, well, they are British! Leading the fleet is HMS Prince of Wales (aka HMS Lardarse). The British dreadnought is the fattest ship on the oceans, but its 6 turrets and 2 shield generators also make it one of the hardest. It is supported by the carrier HMS Warrior, which can also stand up to a fair battering. It has a lar 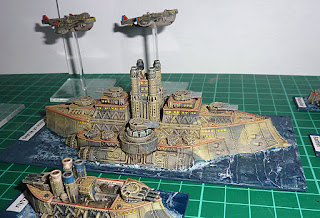 ge light deck mounted on two (yes, two) battleship hulls. HMS Empress is the battleship, formerly command ship of the fleet until Lardarse arrived. The tribal class cruiser squadron has HMS' Zulu, Gurkha and Maori. Solid ships, they can replace a gun turret with a shield generator, but why would you? The 3 escort squadrons have a total 9 attacker class frigates between them. The aerial corps have provided a pair of bombers and two mighty war gyros. The fighters are also done, but I decided to rebase them and they have been delayed by painting for other people.

Anyway, there they are. A mighty armada ready to defend her majesty's empire from all aggressors. I decided to base the ships as they have torpedoes and it makes it a lot easier to see the fire lane if the ship is based. Also it looks nice.
Posted by jcralls at 12:03 No comments:

Due to their half price sale on rulebooks I spent a few quid with Warhammer Historical over the Christmas period. First up was Gladiator, which seemed like a good plan as I had a few figures. 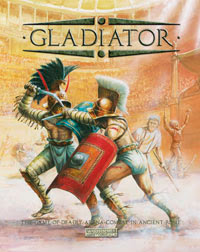 A lovely piece of eye-candy, the book is great to look at. Nice pictures, painting guides and ideas for campaigns. It all looked great until we played it. One thing that came to mind immediately was that it was a bit random. The strength and toughness of gladiators has little or no bearing on the fights. Weapon strengths are fixed and only armour has any effect. Then we come to the deadliest gladiator of them all, the retarius! He is a killing machine, with no opponent having a chance. He throws his net with a 2 in 3 chance of hitting, if he hits there is a 2 in 3 chance of entangling his opponent. If he misses it doesn't matter as he can throw it again next turn, with a range greater than his opponents move.

House rules will make this game work, but it would have been better if they had play-tested it a bit more first.

there also seem to be bits missing from the campaign rules, like the cost of a gladiator! Oh well, it was only £10.

The other set was Waterloo. Not that I plan to play it, but because it was pretty and useful for painting guides. Although, having read them they do look like a fun game. 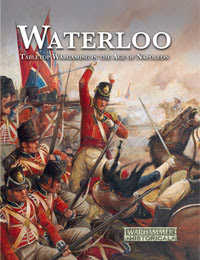 Another shiny book, with some beautiful pictures of peoples figures and wargaming rooms. Only £18 as well, which is nice.

Ah well, off now to take some pictures of ships and gladiators.
Posted by jcralls at 11:52 No comments:

It's been a while

Yes, I'm crap at updating this blog. I shall endeavour to improve my rate of posts this year!

An update on the year may be a thought. 2011 is over, so lets move on. I am painting figures for people on a fairly regular basis now. I have a few regular customers who keep coming back so it can't be all bad. It's mostly Flames of War, but there is also a regular feed of 15mm Napoleonics going to Cornwall. It has been sporadic enough that I have got a part time job to top up the income, so Tesco get me stacking shelves on Saturday and Sunday nights, plus a few others if the overtime is available. Its not ideal, but needs must and all that. It does mean time with my wife is in short supply, so I make the most of evenings with her now, which has impacted a bit on my gaming. But not on Mondays! Monday night wargaming is sacrosanct.

Painting things for myself has taken a back seat. Between painting for others, working at Tesco and managing a colts rugby team, there is not a lot of spare time. I did get a few things done though. 15mm Italians and Falschirmjagers for PBI, some gladiators and some beautiful resin ships.

Anyway, other posts will follow today, and hopefully a bit more often than they did last year. There are a few pictures of some of the stuff I have painted here