Well, 18 to be exact.  Nathan asked me to paint up some for him so here they are.  My first "native" figures and they were actually more fun to paint than I expected.  They will be off to him for basing soon, so they will match in with all the others he has already. There are 8 experienced warriors, with headdresses and leopard skin tabards.  Then 4 younger warriors with not much decoration.  They are supported by 5 foot and 1 mounted figures with rifles or muskets. 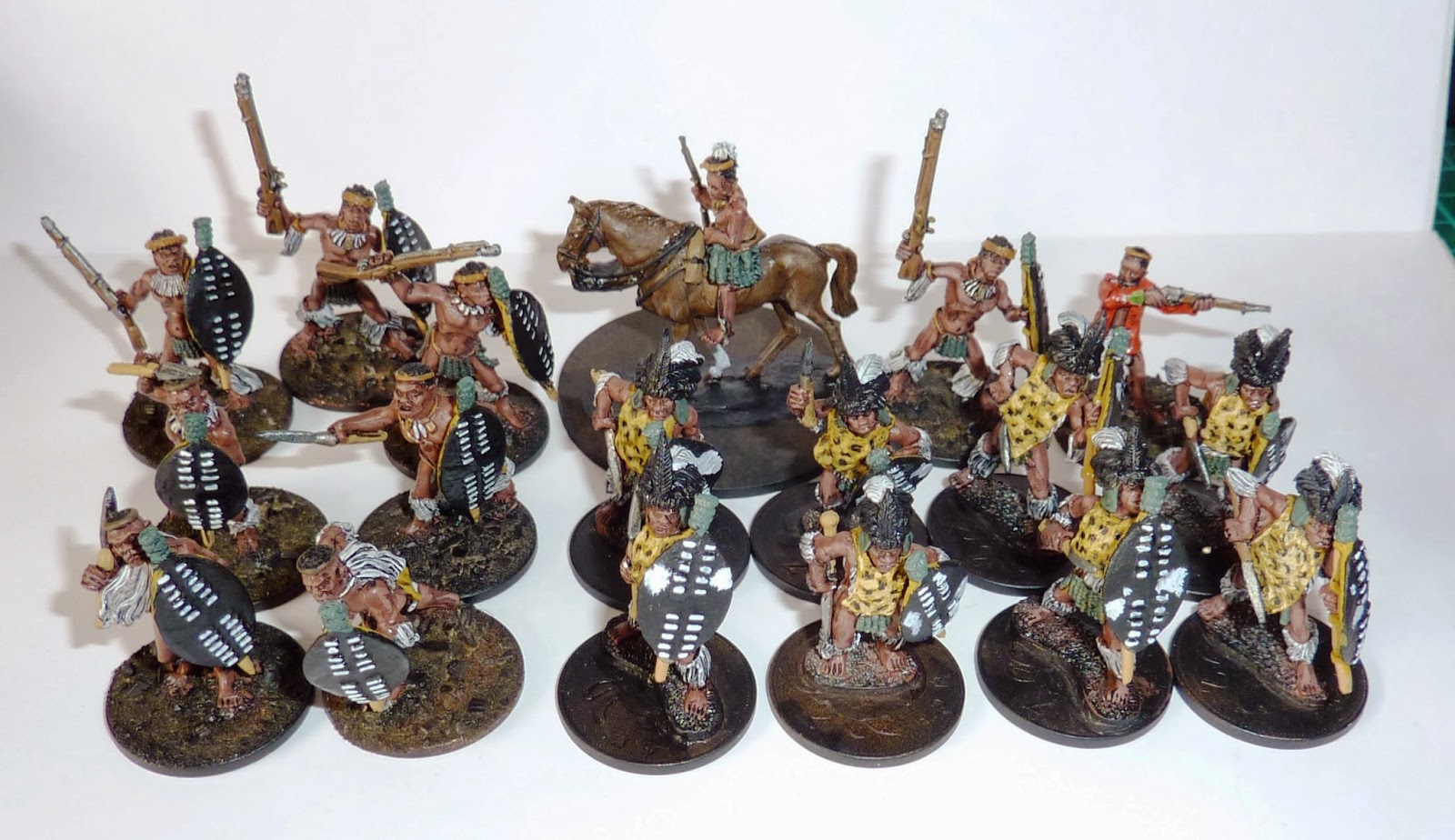 The only other things I have got painted have been 10 Gripping Beast horse archers, but they were put to use before I could photograph them and are still on the table at Zobs.


The Devon Wargames meet was a few weeks ago now, but here are some random, blurry photos from it.

First up is Steve's game of Saga, put on at the last minute to cater for the large number of people.  Over 20 players were there, including several new faces.  The 2 on the right are my sons, its nice to see them getting on!  They played several games, not sure who won but they all seemed to enjoy it. 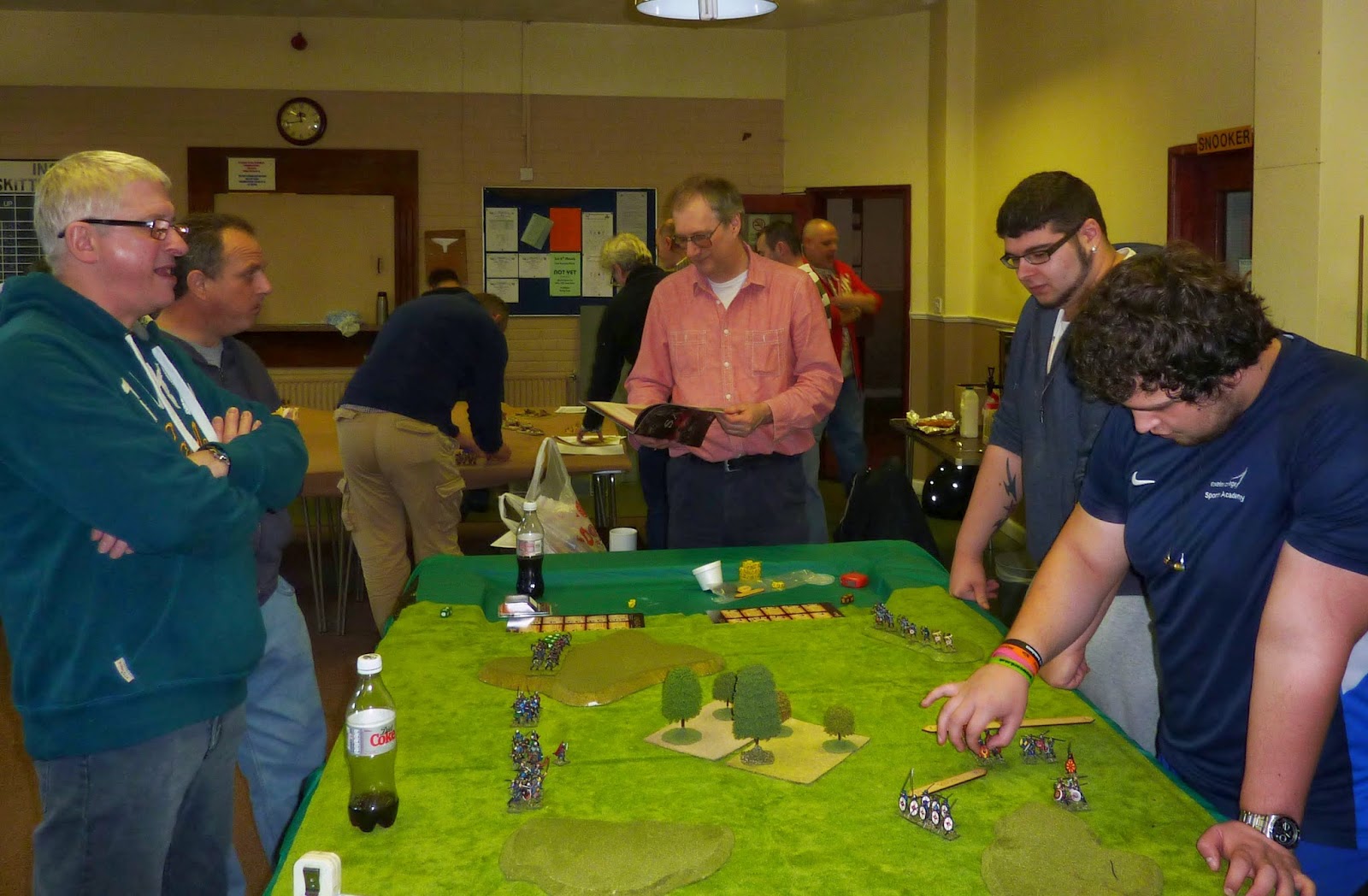 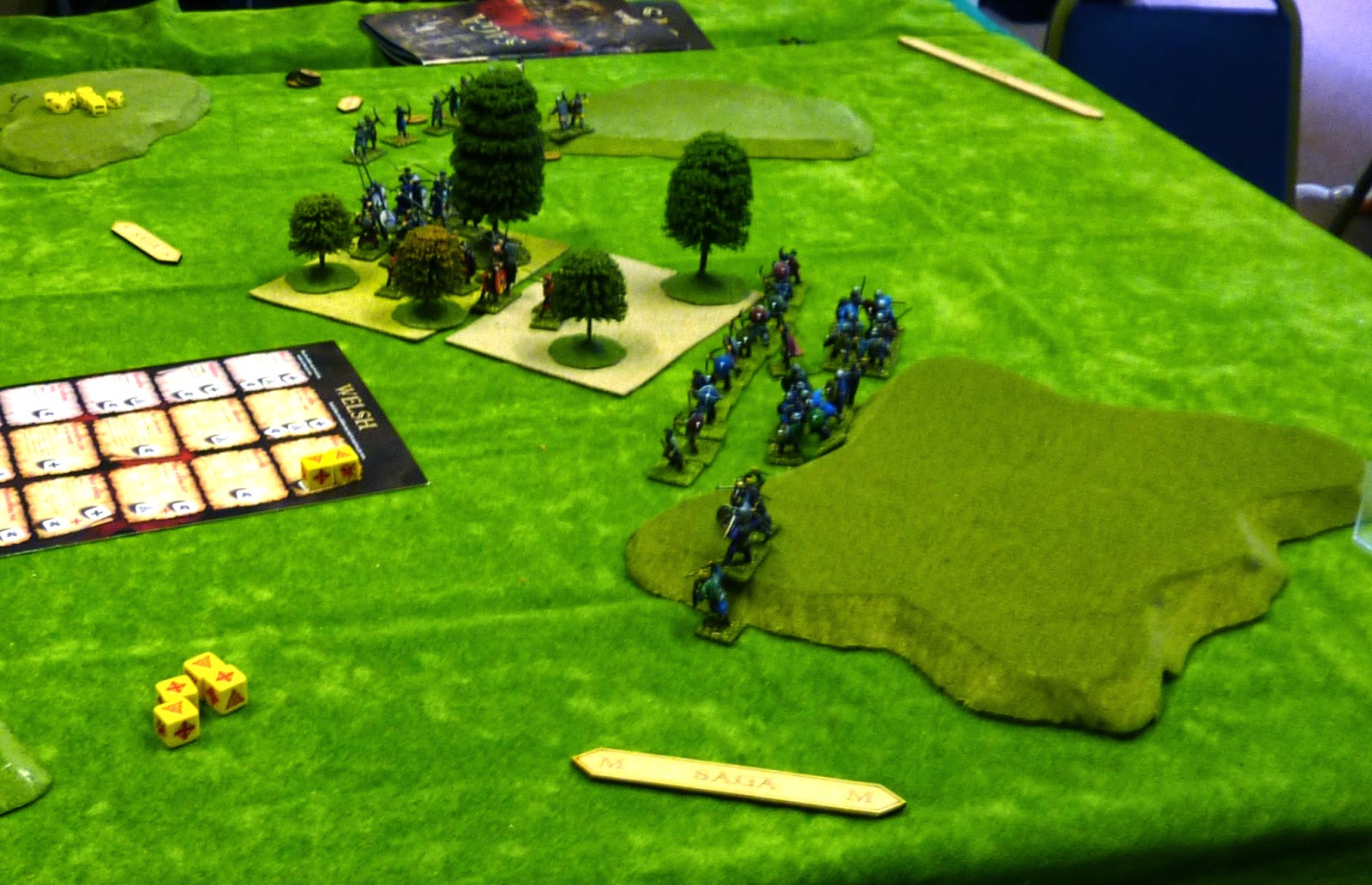 Steve also put on this game, with one of the the other Steve's.  Steve's Romans were fighting Steve's Germans............using Hail Caesar.  The Romans scrapped a marginal victory, despite taking heavy losses.  The Germans were hindered by the inability of the left flank force to move.  It took them forever to get in on the flank of the Romans and, by the time they did, the center tribes had been slapped about and were falling back.  Oh well, we enjoyed it.  I am not sold on Hail Caesar, I still prefer Crusader Ancients rules, but would play these again.  I still have to try War & Conquest at some point as well.  Thanks to Roman Steve for running it and German/SAGA Steve for providing his troops to be butchered. 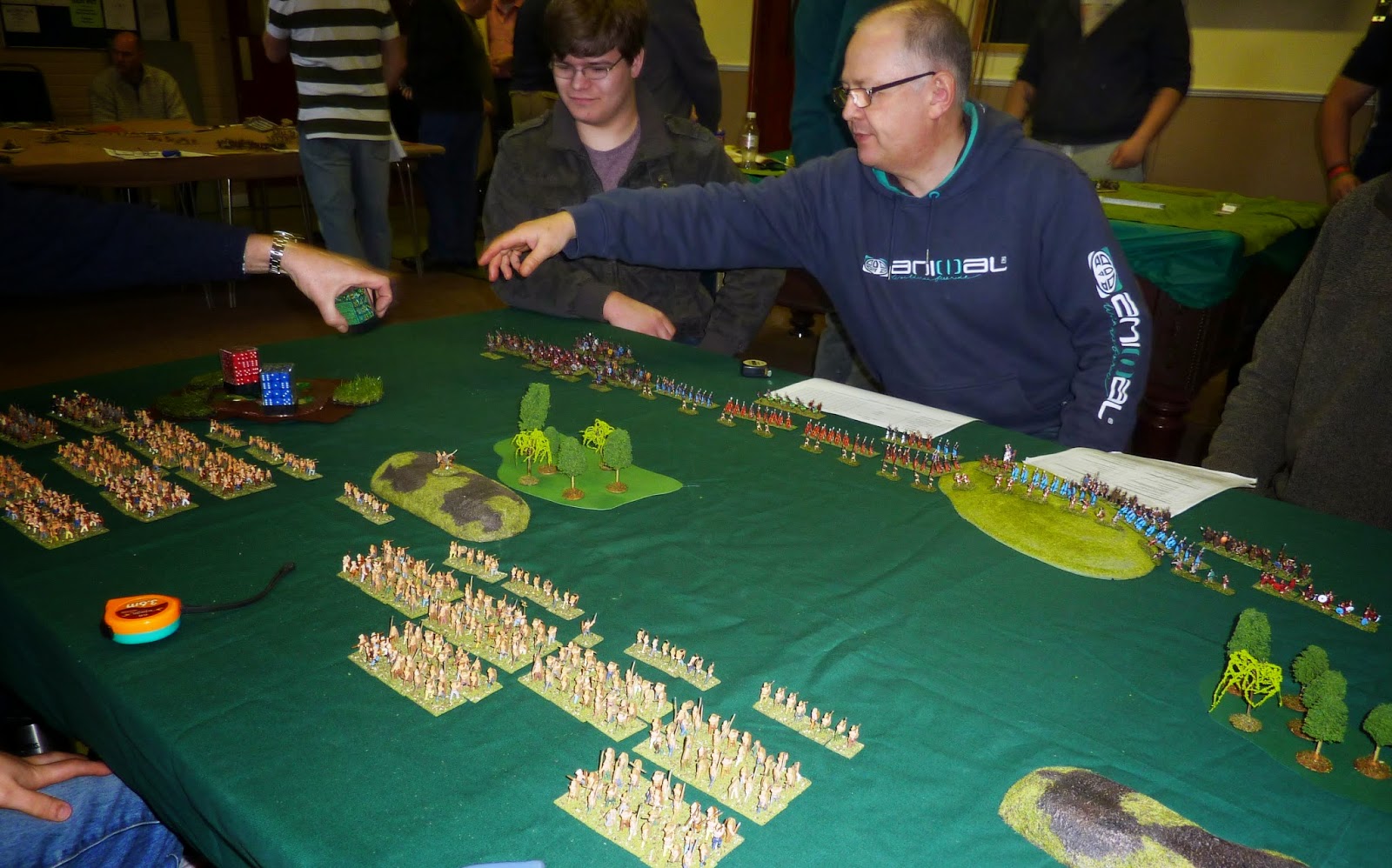 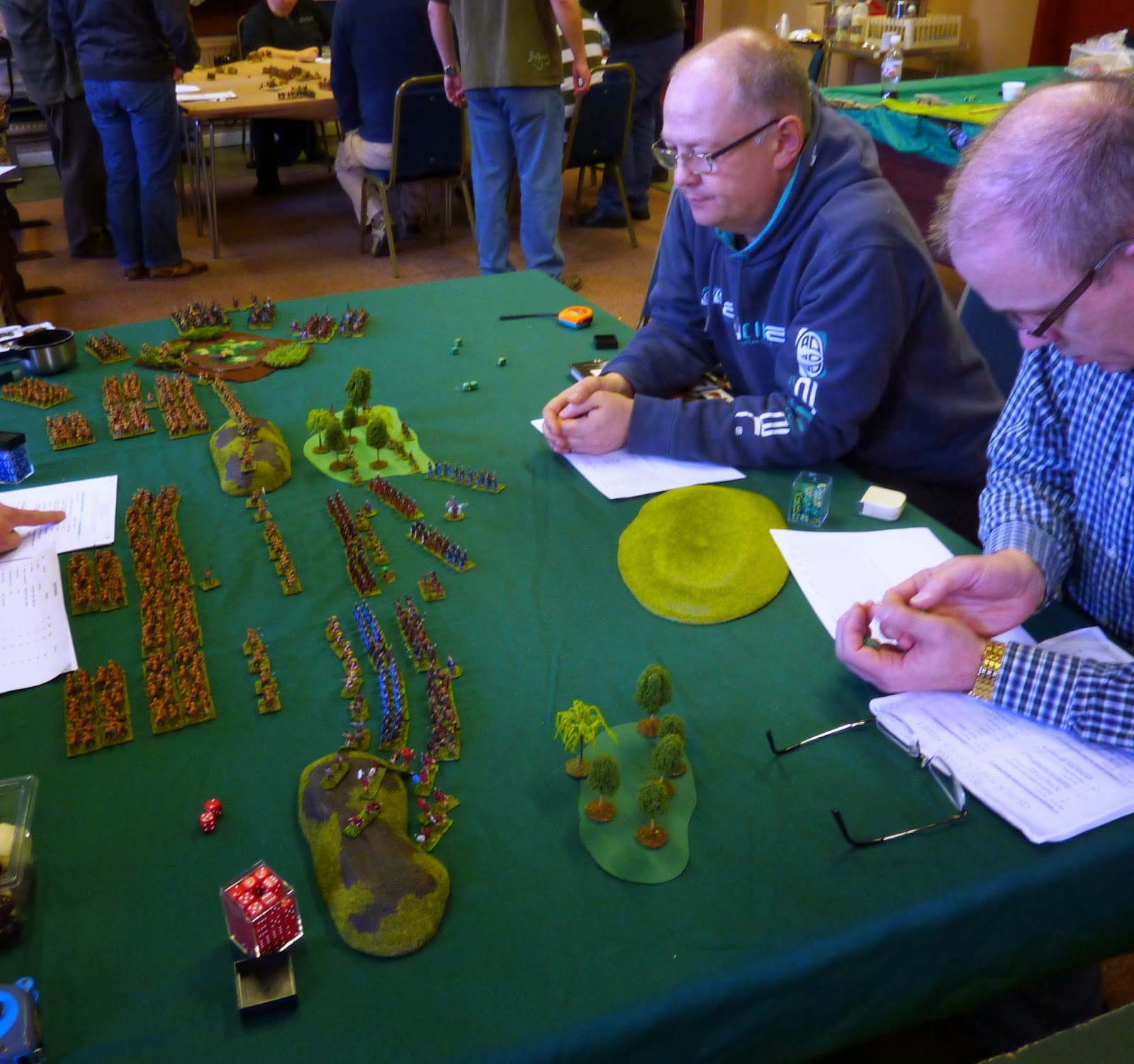 The third game was Nathan's Colonial game.  Anglo-Egyptians advancing in the face of hostile native Sudanese and Fuzzies.  From the look of things it was a black day for the Empire, with squares breaking and units being butchered all over the place. 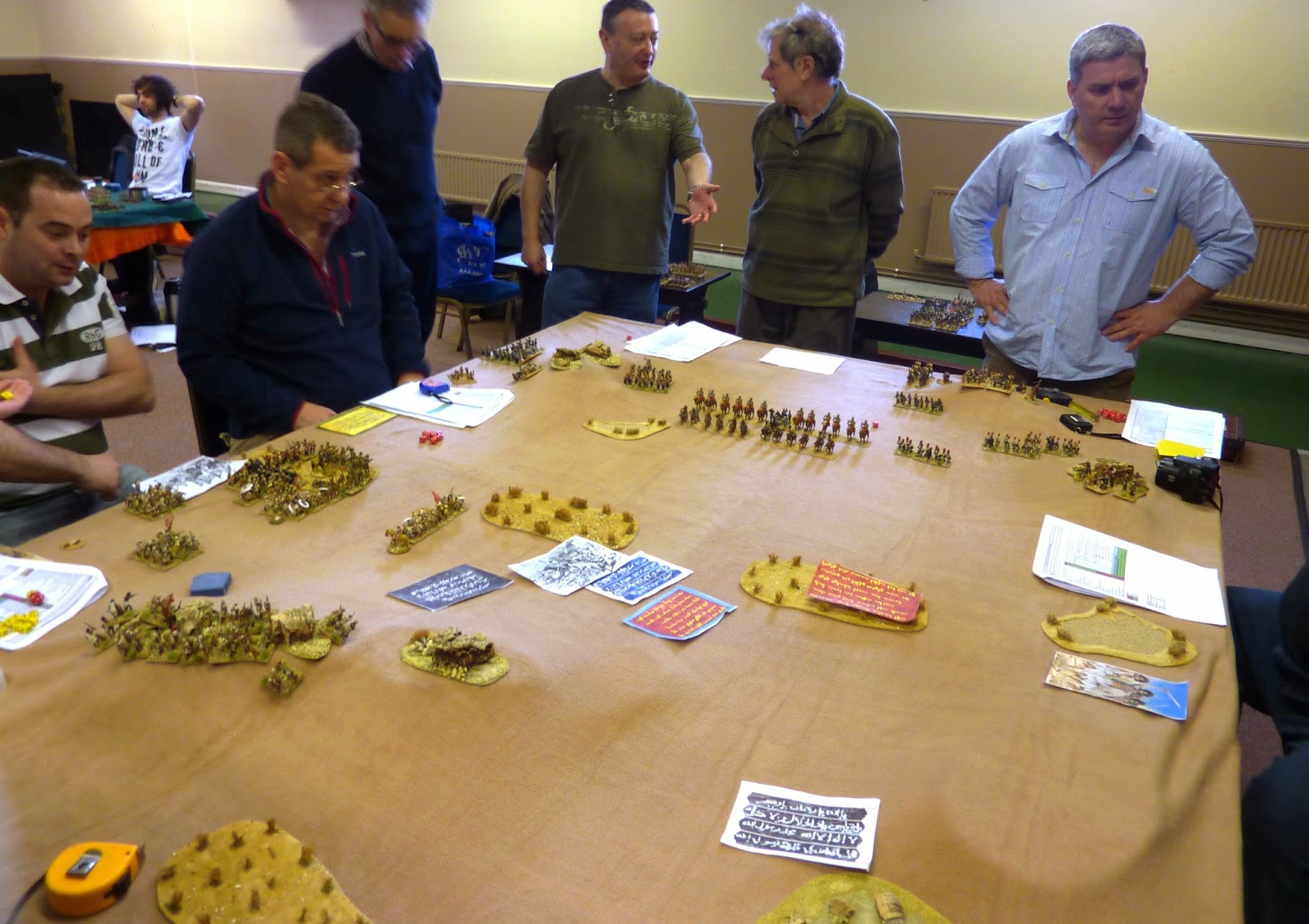 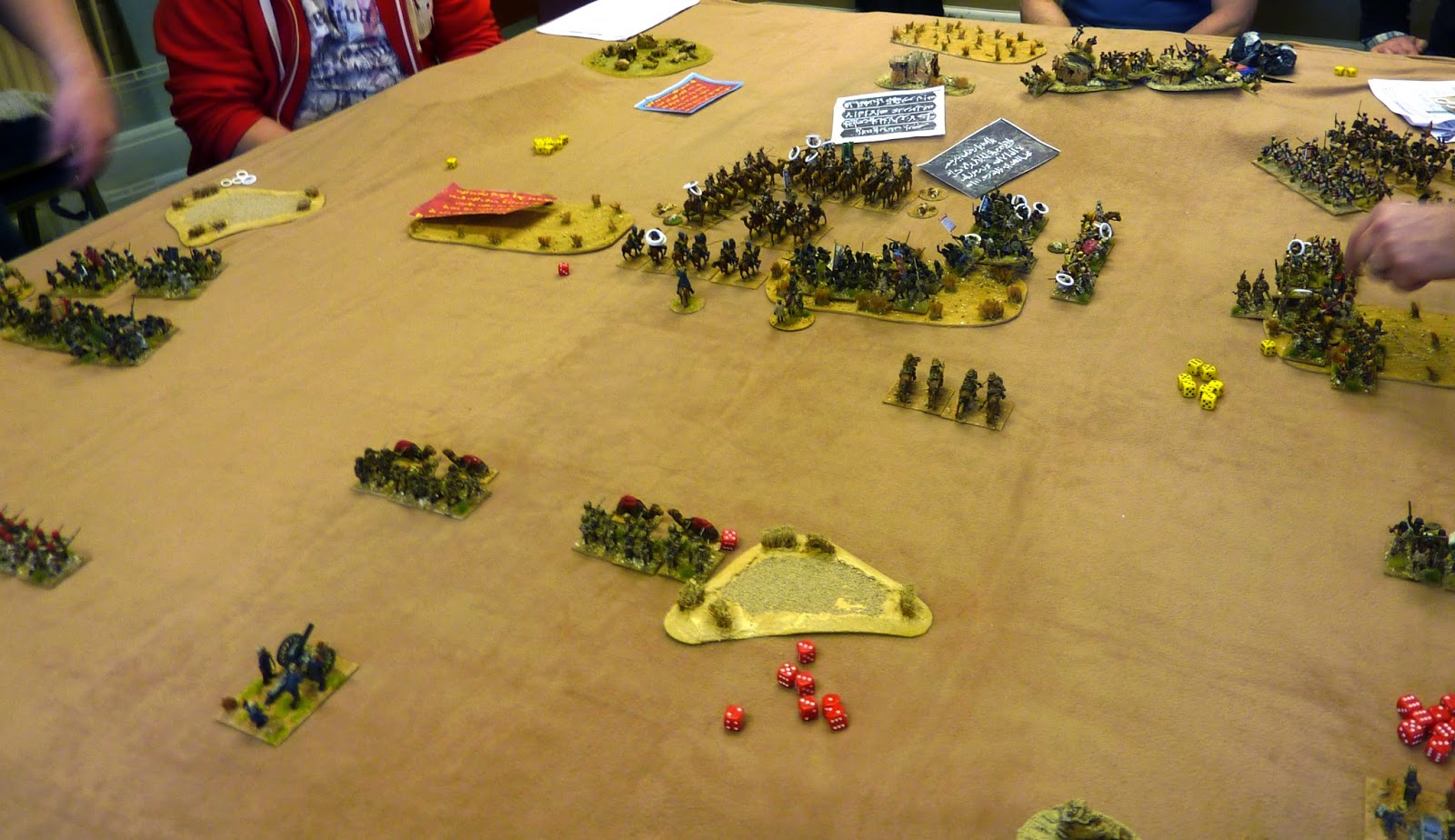 In other news, our Salute tickets have arrived so we are definitely going now.   I have several tons of painted Napoleonics to deliver, plus a few things to pick up for myself.  I also folded under the pressure and ordered some of the Battlefront Vietnam stuff while they have a sale on.  I have liked their ANZAC figures for a while, so have a platoon of them, plus some M113s and conversion bits to make the fire support version with the Saladin turret.  The plan is to do a what-if setup based on ANZAC support going to Africa, utilising the under used AK-47 figures I have in drawers here.  I am still toying with the idea of getting a few more bits, like Centurions and maybe some more M113s.

Anyway, that's it.  I am off now to contemplate painting some British Colonial infantry types.  Keep rolling those dice.

This year is flying by, it's hard to believe that it's already March.  February has gone, thankfully, so hopefully March will be better.  I didn't get much painted as I have felt pretty crap for most of the month.  The doc has changed some of my meds and the period between finishing one lot and starting the new ones has been less than pleasant.  I have not slept well since this all started, but now I seem to have insomnia to add to it all.  Ah well, life goes on as they say.  Keep smiling and don't let the buggers get you down.

I have painted a few things, some ACW Union infantry and some Crusader Miniatures Republican Romans.  I also rebased my old ACW Union figures to match the new Union troops.
Gaming has suffered a bit, but I have managed to get along on Monday nights.  It does mean Tuesday and Wednesday are bad days, but it's worth it to get some gaming in.  We have played a nice Sudan game for the last couple of weeks, set up by Nathan and using the Too Fat Lardies "They Don't Like It Up 'Em" rules.  Despite the best efforts of the righteous Sudanese tribes, the Imperialist dogs won the day.  Their losses were heavy though, with Colonel P.F Bunny getting a spear through his chest as he stood with the last few Guards.  A massed charge broke the Egyptian square and the Sudanese carried off the Egyptian cannons.  All in all it was a pretty good game and was a precursor to the game Nathan put on at the Devon Wargames meet last Saturday, more of which in my next post.

Tonight I shall mostly be playing Chain of Command against Colin while the other reprobates go upstairs and play Zombicide.  I am off now to try and find my painting Mojo again, it seems to have left with my ability to sleep for anything over 4 hours.  Keep rolling those dice.