Not much to report

No news is supposedly good news, but not so much when it's the hospital your waiting to hear from.  Ah well.  Onto the important stuff.

Gaming has still been limited for the same reasons.  I popped in to the Devon club and saw some fun looking games.  I couldn't stay as long as I would have liked but it was good to get out for a bit again.  The games are reported on the blog so have a look and see what they get up too.

I managed to run a multiplayer game of Chain of Command for the Monday night lads and it seemed to go pretty well.  It lasted a couple of weeks as I struggle by 10pm but the Germans were eventually defeated by the raiders.  It was a bit "different", with two forces competing with each other whilst attacking a German camp.  I will eventually put up the scenario and some photos but not until I have played it a bit more and sorted a few things out.

Painting is going on slowly.  I am waiting for a delivery from Firestorm Games after the Royal Mail lost the original package.  I can't recommend these guys enough, their customer service is exceptional and they are my go-to online store as well as getting an in person visit anytime I am in Cardiff.  While I am waiting for them I have been painting some odd bits I have got here. 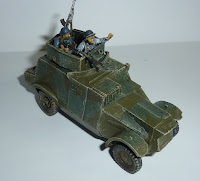 First up was a 28mm Morris CS9 armoured car that I have had in a drawer for years gathering dust. By adding a couple of Perrys 8th army figures I now have a decent addition to my VBCW force, espescially as it has a Boys anti-tank rifle and a Lewis MG to suppress those damn rebellious types. 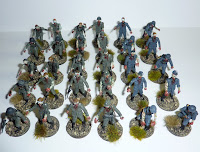 Then there was a bit of an oddity.  Some time ago Northstar sold off their Studio Miniatures stuff cheap and I grabbed a box of German WW2 zombies.  No idea why, it seemed like a good idea at the time.  They sat in a box until this year when the Too Fat Lardies Christmas New Year Special came out with additional rules for Chain of Command.  What did these rules cover.......German WW2 Zombies!  So out came the figures, glue was liberally applied and paint was slopped over them.  Voila 30 German zombies! 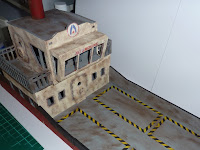 MDF has really made an impact in wargaming, first with buildings and terrain and now with vehicles and ships.  TT Combat appeared on the radar recently and have some really nice models and very decent prices.  I stumped up some pennies and bought a Cargo Ship and very nice it is too.  Measuring nearly 20" long and over 5" high it is really good value.  I spent a day putting it together and filling in the bow area to make it smoother, then out came the cheap craft paints and away I went.  Then I dirtied it up with some chalk powder and the like as it supposed to be a tramp steamer type of thing rather than a nice, clean ship from a merchant company.  I am really impessed with this company and I will be getting some of their buildings as soon as finances allow.

Now I had a ship, but no crew.  I also wanted to use it for my VBCW force of Royalists based in Torquay, so it would need to defend itself from the Fascists/Communists/Commoners etc.  Northstar again provided the figures with an impulse purchase of a couple of packs of Pulp Figures crew.   A quick paintjob and there they were, ready to sail into harms way.  But they will need some guns to protect their valuable cargo, so HLBS to the rescue with a really nice model of a 6pdr Hotchkiss  gun. A couple of Lewis guns on the bridge wings and it's ready to go.  The guns are all magnetized with magnets also hidden under the decking of the ship, so they are removeable.

So, that's it for now.  I am off to do something less productive.  Have fun folks.

February already...how did that happen?

It seems that a month has passed and I have little to show for it.  All in all it's been a pretty rough month, with various ailments hitting me and not much gaming happening.  This time of year always comes with a host of coughs, colds and other such ailments but this year I seem to have caught every single one of them.  Ah well, new month means new hope.........I hope.

Gaming has been very limited, a game of Chain of Command and a game of Blood Rage has been just about it.  I did manage a short visit to Crusade up in Cardiff, which was a nice trip hindered only by my inability to stay awake for the whole visit.  A quick snooze in Nathan's car set me up for the trip home though.  Didn't buy much, saw some old friends and almost fell for a new period.  Luckily I snapped out of it and left it there. 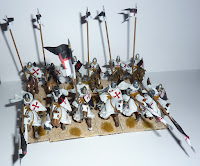 Painting has been fairly productive, considering how rough I have been feeling.  I managed to finish and base my Templar Knights finally, as well as painting up the first lot of foot to support them.

So here they are, 12 mounted knights/men-at-arms all ready to take the power of Christianity too wherever the gold is...I mean to educate the heathens. 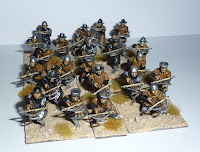 Then there are 24 Crossbowmen ready to dispense God's will from a distance.  At some point I will get back to the Crusades and paint the next unit, 24 Spearmen to protect the crossbows from Arab cavalry but I have been sidetracked by painting things to raise a few pennies.

Finally I got a box of Perry Miniatures 8th Army painted up.  I have had these for ages and finally got all 37 figures done and dusted and promptly put on eBay to fund my kickstarter habit. Ah well, that'll teach me to spend more than I budgeted for.


That's it for now, I am feeling rougher than a rough thing so I'm off to me bed.  Hopefully another update will appear soon, I need to be more positive this moth as last month was pretty dire.

Happy gaming to you all.