Hello again, it's time for another random update.
Last post I talked about the new ruleset from the Too Fat Lardies. My plan is still going ahead, although I am unsure which figures to get for my Caesarian Roman force. Warlord's plastic figures are cheap, but the two different boxes are not so different with the same figures and different weapons, while Wargames  Foundry are a bit to pricey due to the current financial state. So, decisions are still to be made on that part. I have started rebasing my existing Ancient Britons, which will suffice for that force, but I really want to do a Gallic force. Sadly I missed the boat and now the Victrix Gauls are about as common as hen's teeth. Apparently a vast mountain of plastic was delivered to a suspect family in Wiltshire. 😉
Anyway, we have played a couple of games now, using the extended furlough to game in Andy's back garden and keeping a safe distance. Not that safe as Pingu can throw his dice a fair way when they upset him, but fairly safe. Anyway, we played the first game and things went badly for the Romans. Lets just say that Panjo was not prepared for the ambushes and completely forgot about his drill. Apparently the dice gods hate him and the card gods loath him too, so he took a hell of a beating.
We had to take a few liberties with troops as we didn't have anything based correctly, but we made do. We were also very lacking in Roman archers, so some Gondorians were drafted in. Anyway. it all started out well for Pingu and the Romans. The Legionaries advanced from the village with archers on their right and skirmishing auxiliaries off to the left. A few slingers appeared ahead of them, but they were few and far away.
After a few volleys of sling stones though, the Roman attitude changed. Two legionaries lay dead and Centurion Curious Odus was not happy about it. He ordered Felonius, leader of the auxiliary infantry, to push ahead a clear the slingers from the far side of the river. Whilst one group was well up for this moving ahead and getting into javelin range, the other group decided to stay far back and see how things went. So, only 8 javelins were loosed needing 5 or 6 to hit. Two or three would be an average result.
Pingu got seven hits! Hated by the dice gods my a**e, that was a phenomenal first roll for the Romans. Maybe today was to be their day after all. So Andy gathered up seven dice and rolled them, expecting to lose several men. The dice gods quite liked Andy as well though as he only lost 1 man and got 2 points of shock.
Curious Odus was incensed, how dare those smelly barbarians not die from good Roman(ish) javelins. So he seized the initiative and pushed on with the Legionaries. A quick order and pilums were loosed at the other slingers in the wood. Now we made a bit of a mistake here and rolled a few too many dice, it should have been 12 dice not 14, but the gods smiled on Pingu again as he got 12 hits. "That'll show 'em" Odus yelled.
The leader of these Slingers, known far and wide as Nigel, picked up his 12 dice. Luckily they were in cover, so only 6's would kill while 3 to 5 would cause shock.
It did not go well with 5 slingers falling skewered by pilums, including Nigel. The sole survivor promptly legged it, suddenly remembering he had to visit his mum. Meanwhile the Roman archers pushed up and to the left a bit, forgetting that the woods were potentially full of hairy barbarians.
The Britons chieftain, Aedan Know, seized his chance and unleashed his cavalry. Admittedly they are skirmish cavalry and, again, we got some rules wrong. In hindsight the archers would have been better off standing and fighting but instead they evaded. They evaded very poorly, running a grand total of 4". The end result of that can be seen in the picture below.
The result after two rounds of fighting was a lot of dead archers and 8 shock. This broke them and they ran away screaming something about "Orcs not having horses". Anyway, they out distanced the donkey wallopers and thought "Phew, we may survive this". However, Aedan wasn't finished with them yet. They had strayed within 12" of another unscouted wood, this one was full of Noble warriors led by Drest Nicely, who promptly leapt out and shouted BOO! 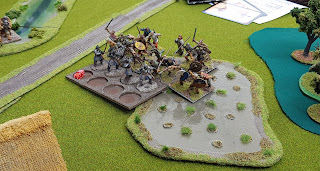 I couldn't bring myself to take any more pictures (alright, I forgot to), but unsurprisingly all the archers died. The struggle went from bad to worse for the Romans from there, with the Legion then being ambushed by the remaining 4 groups of warriors. But not until the support rank had been detached under Optio Superflous to face off the noble warriors. It went badly for the Romans, very badly and the majority of the Legion died.
Things we learnt were
Anyway, it was fun and a good way to spend a sunny Wednesday afternoon in June. My thanks to Andy for hosting, feeding and watering us and to Pingu for losing so competently.
Who knows there may be another write up soon. Maybe. I will leave you with this picture, a purple bearded Pingu! 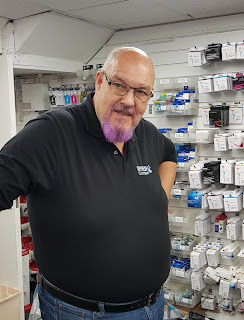