Operation pending and yet more ACW

I am off to hospital tomorrow for the long awaited operation.  It's not the op I hoped for but at least I won't have this damn tube stuck down my nose anymore, so happy days.  Now onto the serious stuff.......

I have finally been motivated enough to get some paint onto lead and plastic.  A while ago I bought the ACW army box that the Perrys sell and it is mostly good.  Some cracking figures, some nice scenery and a couple of mounted officers only available in the box.  Sadly a chunk of the figures are the original ACW figures and not the newer, more dynamic, poses but they will do for a while.  So I have cracked on and now have a near finished Union force for Sharp Practice.  I added to the box contents with a pack of commanders and dismounted cavalry for both sides, plus a sprue of Zouaves, one of cavalry and 2 of union skirmishers from ebay.

I have nearly finished the Union force now, just the artillery to do at some point but they are a rarely seen support option in the games we have played so far. My planned force is six units of 8 infantry, 2 units of 6 skirmishers and one unit of 8 cavalry with 6 dismounted figures.  Along with that I have 2 standard bearers, a drummer, a physic and 9 leaders, 6 foot and 3 mounted.

I already had some of the older figures painted up, so they make up half of the infantry units with 3 groups of 8 men and a unit of skirmishers.  Newly painted are 24 Zouaves, 2 Zouave leaders, 3 mounted officers, 1 foot officer, 8 mounted cavalry, 6 dismounted cavalry and 6 skirmishers.  I shall replace the older figures with a box of the new Union Infantry from Perry Miniatures soon......maybe.

The zouaves are painted up as the 140th New York Volunteer Infantry, who started out as a regular uniformed unit but were changed to zouaves in the winter of 1863-64 as a reward for their seamless record.

I did a little bit of modelling on the cavalry, changing the arms and chopping bits about to give them carbines instead of sabers and pistols.

I am partway through the Confederate forces as well, but none are based yet.  So there it is.  I had hoped to get the rebs done too but time and other things got in the way.

One of the other things was fixing a computer for a customer.  It was "making some funny noises and not working properly" was the clear and concise information I got.  After a few questions it became clear that this PC was a few years old (Windows Vista!) and had never, ever been cleaned.  So I opened it up and, after removing the dust that was inside the case I started cleaning the fans.  The main fan vents at the back were completely blocked and the fan was so jammed up with crap it had burnt out the motor so I had to replace it.  The cpu fan was also full of crap, so I removed it and found a load more crap.  That's the picture below, after I have removed the cpu fan to clean it.

I'm actually quite surprised it worked at all, given that the fans were clogged up so badly.  The graphics card fan was also blocked, so it all got a damn good clean out and was soon looking almost as good as new.  A new fan, a good clean and it's all quiet again now.  A quick check of the systems and I find 2 copies of Vista, 3 different users, all with the same name and lots of multiple copies of various programs.  It's all done and gone back now and he is happy as Larry, but it took a bit longer than planned so my painting is now behind schedule.  Ah well, life goes on.

Good luck with whatever gaming you do, I shall return after the hospital release me.

When we left it the Confederates had gained control of Sequatchie and pushed the Union forces back out of the town.

For a couple of turns both sides gathered themselves, the Union marched to area 10 then marched back again in dense fog while the Confederates recalled their cavalry from scouting to form up for battle.  While it didn't slow down the troops movement it did manage to throw off all the explorer and scout rolls, meaning the Confederates lost sight of the Union force.

A sudden realisation of the proximity of the main Confederate force led to Major Trump attempting a ruse de guerre.  He managed to gather enough grey uniforms to outfit 2 units which he despatched under Captain Lambert to attempt a flanking attack by pretending to be the lead elements of the Confederate main force.  Meanwhile the rest of his force, under his leadership, would attack and draw off the defending troops.  That was the plan anyway.

The main force was delayed due to the severe movement penalty caused by an orchard (-1 pip per dice is bad if you keep rolling 1's and 2's).  It took them 3 turns to get through, resulting in dawn arriving before they could get out of the trees.

Sequatchie was under curfew as the Confederates consolidated their hold.  Faint noises were heard by the pickets, but no alarm was raised.  The early dawn light changed that though as the guards saw blue uniforms in the orchard. 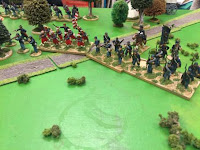 Major Trump heroically led his men from the rear, appearing out of the orchard and realising they had been spotted.  How did he know you may ask? 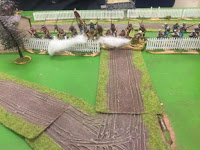 Because the Confederates were firing at him, that's how.  The fire was largely ineffective, but it did drop the odd man here and there as well as starting the slow accumulation of shock. 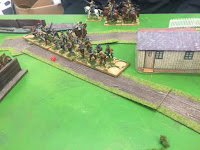 More Confederate infantry appeared, supported by the single unit of cavalry.  Could the Reb cavaliers make a difference on the day?  Who knows, well I do but I'm not telling. 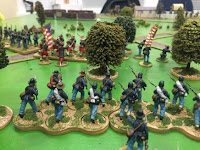 More Union troops struggled through the closely packed widely spaced orchard.  It's amazing how many 1's Colin can roll for movement.  In the meantime the front troops opened up with an uncontrollable volley on the Confederates.  Their rifles soon gained the upper hand against the muskets of their opponents, but the exhileration of seeing the enemy falter was too much as they ignored their officers cries and kept firing straight ahead. 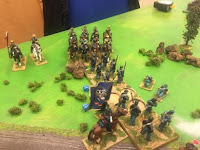 This gave the dreaded grey-clad horsemen the chance they needed and in the galloped.  Sam Colts equalizers blazed away and many blue shirted infantry fell.  As the smoke cleared the result was plain to see.  Several horses and riders were down, but the Union line was smashed asunder. 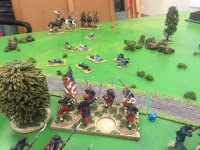 The cavalry were driven off, but at what cost?  The Union formation was broken, with two groups routing back in disorder.  The resulting force morale rolls resulted in the Union command falling below a viable point and Major Trump was last seen heading off for a round of golf. 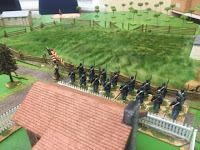 As it all fell apart on the left, the flanking force finally arrived.  "Too late" was the cry as Trump galloped away, muttering about fake news and alternative facts again.

The Union plan was scuppered by three things.  First up was the inability of the troops to move through the orchard.  They came on slower than a slow thing.  Then, once the flanking force was available, it's command counter only came out once in several turns.  Flank attacks don't work if they don't actually get around the flank.  Finally it was the uncontrolled volleys that spelt doom for the Union.  Being unable to react to the appearance of the Confederate cavalry cost Colin with two rolls for groups breaking and one for a formation breaking costing him 5 force morale points.

The final score for the campaign was Major Major went from being an "Upstanding" officer to being a "Plucky" fellow and gained influence with his Corps commander.  Major Trump started as "Outstanding" but is now seen as a "Likely" candidate, although with reduced influence at HQ. The Confederates ended up with 3 dead and 10 wounded out of 54 men, Union had 8 dead and 7 wounded out of 66 men, including the two Sequatchie militia units.

So there it is, a quick campaign resolved in 2 battles which made it simple for me.  Maybe next time I'll get to play one.

Later folks, maybe with a picture or two of things I have painted.
Posted by jcralls at 16:13 No comments:

Sorry for the extended absence, I have been struggling with a few things and it has kinda knbocked me for the last few months.  However, yet again morale has been improved by regular beatings from my boss, ahem, I mean wife.  So I have done very little painting or gaming, although I have managed a few boardgames here and there.  I will do another post (hopefully tomorrow) with some pictures of the few bits I have done up.  Good news is that I have finally got a date for the operation to put the tube in my stomach.  April 21st is op day, so I probably won't be celebrating Her Majesties 91st birthday.

One thing I did manage was to run an ACW campaign for Sharp Practice using the Dawns and Departures supplement, which I can highly recommend.


The scene was set when I found a pair of willing victims"volunteers" in Panjo and Colin.  Panjo is an out and out rebel at heart while Colin is happy so long as he gets to use his figures.  Below is the map used for the campaign, there is also a road running from area 2 to area 23 down the centre squares.

Panjo had the mission of securing the town of Sequatchie to facilitate the advance of the Confederate main force.  He started in area 23 on turn 1.  His force consisted of the following units and resources
These fine fellows commanded five units of 8 infantry supported by a single unit of skirmishers.  Panjo spent his 24 support points on an exploring officer, a physic, a musician, a mule train, spirits and tinder, a unit of 8 cavalry and a status 1 leader for them(Lieutenant Oliver Coleville).


Colin had the ambiguous mission of "stopping the rebs", without knowing what they intended.  He started in area 2 on turn 2.  To do this he had the following force
They commanded a force of five units of 8 infantry supported by a single unit of skirmishers. Colin had 26 points to spend and bought an exploring officer, signal stations, a physic, a transport cart, an additional status 2 leader(Lieutenant John Ford) and upgarades for his original 3 leaders.

The map below shows the map moves for turns 1 to 7, with Panjo neatly sidestepping Colin and attacking the Sequatchie militia in turn 7.  The use of the Confederate cavalry as scouts gave a decided advantage to Panjo as he had a clearer view of what was going on.  A random event in turn 7 allowed a double move, so Colin was just able to get to the town before the end of the day, but a determined Confederate attack forced the Union forces back in disarray.  Colin lost his transport wagon and 5 wounded men to the victorious Rebs.  Can the Rebs hold long enough to win though?

I will finish off the report tomorrow, this is long enough for one post.  Sadly there are no pictures of the Battle of Sequatchie, which resulted in Major Trump referring to the result as "not real news" as he had some "alternative facts" about the battle...........
Posted by jcralls at 22:10 4 comments: