I have been sorting out my VBCW collection to see what I need to add to complete my company.  After sorting out what I had I came to the conclusion that I don't need much.  I have enough for 3 platoons of 3 ten man squads with 2 commanders each, plus a command group.  These are supported by an HMG, an 18pdr gun, 10 cavalry and an assortment of vehicles.  I could do with another HMG or two, plus maybe an anti-tank gun.  I am thinking of getting a Bofors 37mm from Empress Miniatures plus a militia Vickers from Footsore Miniatures. 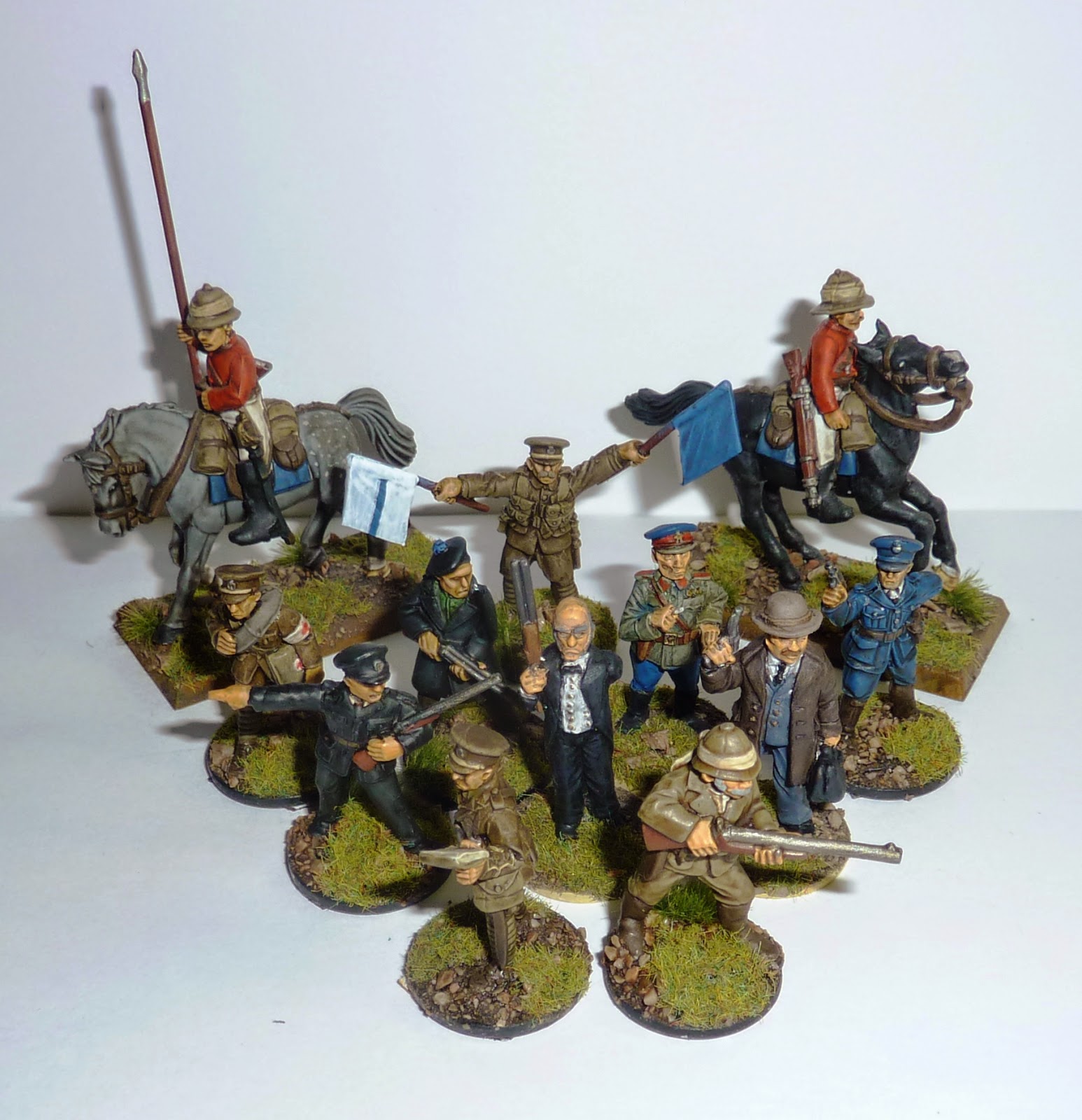 First up is the command group, consisting of his Lordship William Clifford, 10th Baron of Chudleigh.  While he is getting on a bit, he is still a crack shot with his trusty elephant gun.  He is assisted by his son and heir Charles, who served with the Royal Scots in WW1 and still has connections with his old regiment.  The rest of the group consists of various members of the household, including James the butler and Doctor Almond, ex RAMC.  There are also representatives from some of the various units in the company, who report on events in their areas of operation.  Last but not least is Balakin Yanovich, a former "advisor" for the communist faction who saw the error of his ways.  Rumour is that he was swayed by whiskey, cigars and one of the maids in the estate.

The Home Guard platoon is based at Ugbrooke house, home of the Baron.  Command is held by two officers of the 2nd Bn, Royal Scots.  One Section is active duty soldiers from 2nd Bn who have joined their former comrade in arms and serve as the house guard.  Two section is made up of the friends and comrades of the family, most having seen service in the Great War.  They are well equipped with rifles and a Lewis gun, but lack uniforms.  Three section consists of some of the workers and tenant farmers from the estate.  Again most have seen service but they are less well equipped than the other sections.  Several carry shotguns instead of rifles, but they now the local area and include some crack shots.

2nd Platoon is based in Chudleigh and maintains a strong force in that area.  Commanded by Donal Mac Commargh, a former Captain in the Royal Ulster Rifles.  A shadow hangs over his past, but he has proved to be a loyal friend to Charles Clifford.  He is assisted by Lt Williams of the Devonshire Regiment, who joined the Royalist faction along with several of his sections.  One section is regular infantry from the Devonshires, with a Lewis gun.  Two section is former soldiers from the RUF who followed Donal into exile.  Again they are well equipped with a Lewis Gun and rifles.  Three section is local militiamen, but they also have a Lewis gun giving the platoon a surprising amount of firepower.

Third Platoon operates in and around Kingsteignton.  Commanded by Commander Richard Williams, ex RN.  He is assisted by Sgt-Major Lewis, a seasoned veteran who won the MC in WW1.  One section is again from the Devonshire's with a Lewis gun.  Two section is made up of former train and ship crew men and usually serves in and around the MT depot, maintaining the vehicles.  The lack a Lewis but have found an SMG from somewhere.  Three section is again made up of local militia, equipped with rifles and a Lewis gun. 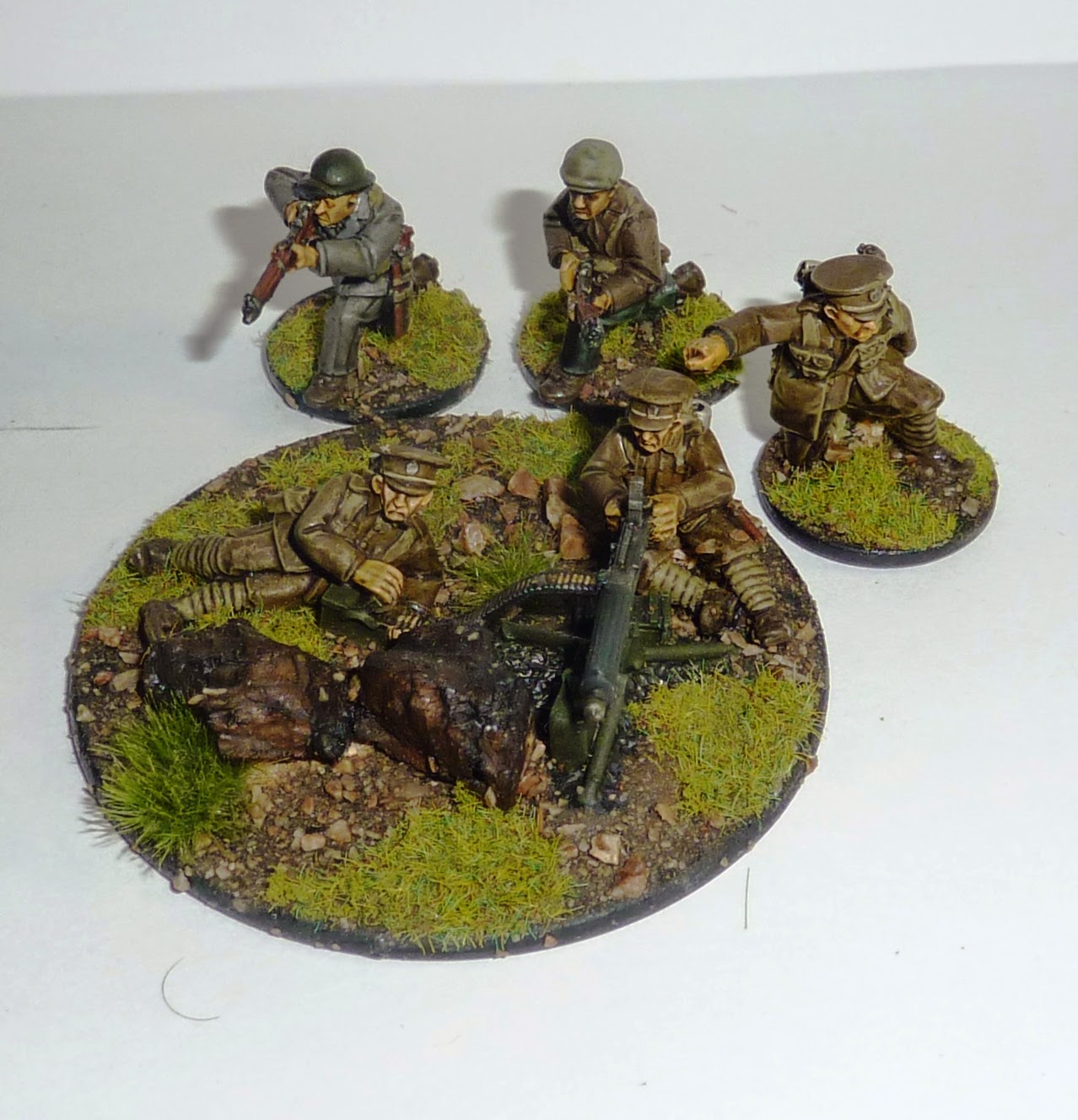 Support is somewhat limited, due to the lack of military depots or armouries in the area.  The Clifford's have managed to get hold of an 18pdr with a reasonable amount of ammunition.  Where it came from is unknown, but the crew are not locals.  There is also a single Vickers HMG, kept at Ugbrooke House unless needed on an operation.  The 3 man regular crew has been expanded with 2 locals as ammo carriers.  There is also a section of mounted yeomanry, armed with modern rifles and cavalry sabres.  Used more for scouting and patrolling than actual combat, they have proved to be a great asset in locating enemy incursions. 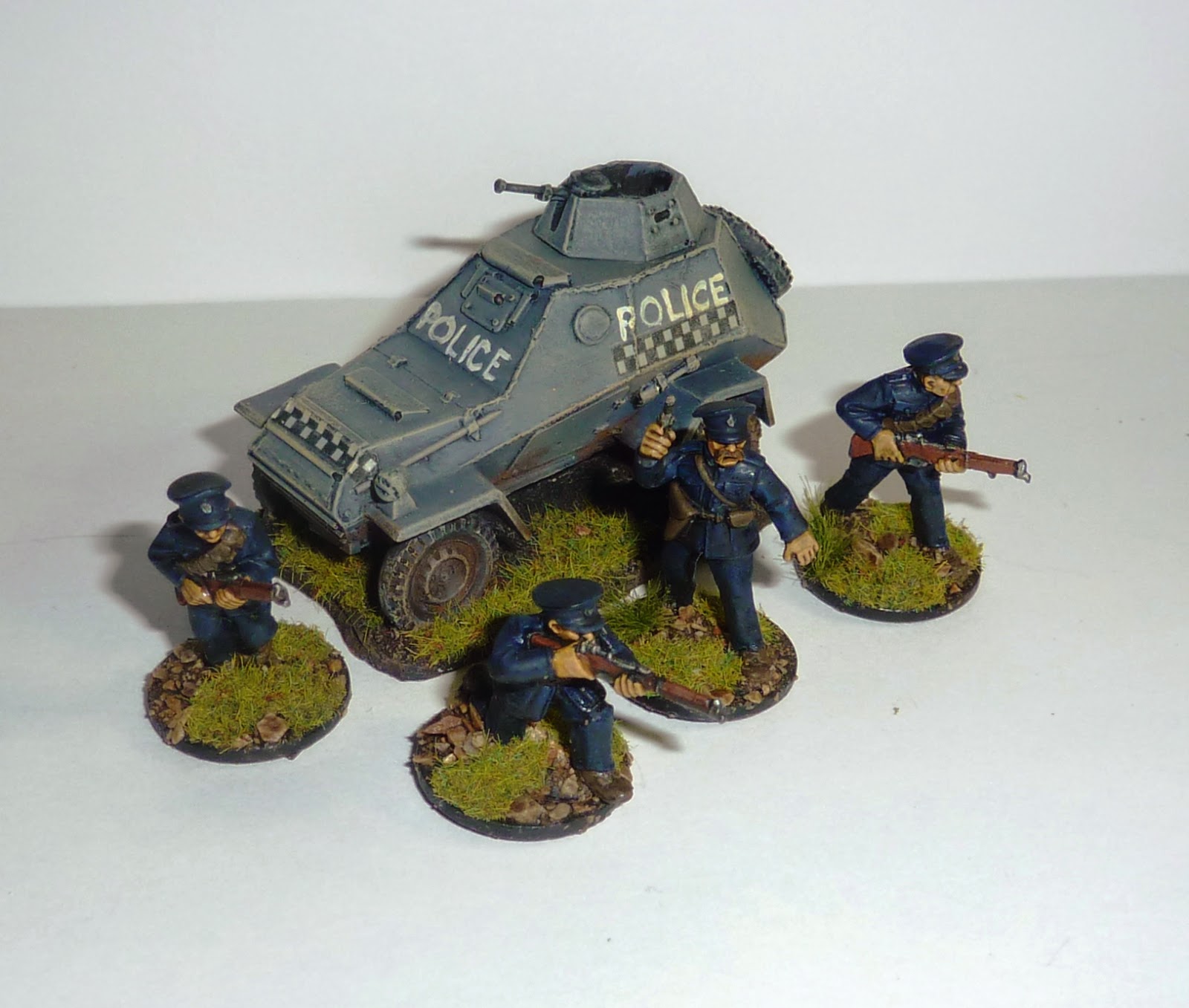 The Clifford's have used some of their influence, and wealth, to amass a surprisingly capable and varied force of vehicles.  These include a converted steam truck, the first armoured vehicle the force had.  It mounts an old 37mm ships gun on the flatbed backed up with a Vickers over the cab.  There is also an armoured patrol vehicle, made by putting a steel box on an old chassis.  It's slow, unarmed and unreliable, but bulletproof.  The next addition was a tracked tank with a fixed MG in the front.  While of limited tactical use it has served as a mobile pillbox and gave valuable experience to the engineers.  This experience was used to produce the heaviest vehicle in the Clifford's armoury.  A full armoured steam tank with a Vickers MG, the lack of manoeuvrability was more than compensated for by the use of a rotating turret.   A prototype Morris CS9 armoured car has also been "appropriated" from somewhere, apparently for a considerable amount of cash.  It lacked armament when it arrived but has been fitted with a Lewis gun for now.  Perhaps the strangest additions have been a pair of Russian scout cars, discovered during a raid on Teignmouth docks.  One was taken into service while the other was offered to the local constabulary to aid in their patrols.  Fast and reliable, their one deficiency is the shortage of ammunition for their Russian machineguns.  Also discovered in the Teignmouth raid were a trio of Polish TK tankettes.  Two have a single MG fitted while the other has been retrofitted with a 20mm anti-tank gun.  These 3 vehicles have proved to be exceptionally effective, small enough to avoid detection and fast enough to avoid an enemy that they can't defeat.  The 20mm gun has proved to be capable of defeating any of the local armour so far encountered.