Its been 2 weeks already since my last update.  In that time I have been a bit ill, then a lot ill and now I am back to a bit ill again.  The ongoing battle between me and my digestive system is still ongoing, with the medical professionals being less help than a chocolate fireguard. So the war is still being waged.

Wargames wise, I have had a quiet time of it lately.   Last Monday was the arrival of Zombicide season 2, which 5 of the Monday night gang had chipped into.  Unfortunately we didn't receive everything we were supposed to, so no original game or extra figures.  We did get Prison Outbreak and Toxic Mall though, so we could at least play the game.

Scenario 00 was selected (original or what, start with the first scenario in the book) and we quickly set off.  We had to open a door by finding the purple key, which was luckily the first thing we found.  Because of the quick find we all got through that one alive.  In fact nobody even got touched by a zed.  We set up scenario 01, but the playing time was 2+ hours and we didn't get time to finish it.  The games look good and the figures are rather nice, with new poses for the zeds and more survivors.

We have split the figures up between us, so everybody has a few figures to paint from Prison Outbreak.  I started on mine and the first 8 zeds are done.  I had 5 walkers, 2 runners and a fattie to do first, so here they are.  I am mixing up the skin shades a bit, with some being pink, some fading towards grey and 2 are grey.  It makes them a bit more varied to look at and makes some appear older than others.  How long does a Zed live anyway?

Other gaming has been limited to the previous Monday night, when we played Pandemic and everyone died several times.  Its probably a good job we don't fight infectious diseases for a living.

Painting is still ongoing, with more Napoleonic Highlanders being done as well as more Sherman's for ebay.  Still Guards Armoured, but Irish Guards this time to make a change.

I have also just ordered another box of PSC halftracks, to give me the extras I need for my Battlegroup force.  I need to make up a command halftrack and a communication halftrack with the extra radios.  I'm not sure yet what I am going to do, but something will come to me.

Ah well, time to get back to the painting.  Keep rolling those dice.
Posted by jcralls at 08:46 2 comments:

Another week, another lack of gaming week.  Bah humbug and all that.  I missed Monday nights conclusion to the Chain of Command game as my wife and I went to Plymouth Theatre Royal to see Warhorse and very good it was too.  If you can get tickets to see it then I recommend you do.  Cleverly done and very entertaining to watch.

Tuesday to Thursday I was sick as a dog with some sort of virus that seems to be doing the rounds.  Not pleasant and it exacerbated my stomach problems so I spent several days in close proximity to the toilet.  I was meant to be going to the Devon Wargames meet on the Saturday, but felt like death warmed up so gave it a miss.  Probably a good thing as I didn't want to infect the others.

Painting took a hit again, which seems to be a common thing of late.  I did manage to get the Shermans I put together painted up, so I now have 4 more Shermans to go on ebay, while the American force in the cabinet have been joined by 5 M4A1 Shermans, to give the Germans something else to blow up.

Another 4 Battlefront plastic Sherman V's, painted and decaled up as  C squadron, 1st Coldstream Guards.  Part of the 5th Guards Armoured Brigade which was itself part of the Guards Armoured Division, this unit fought all the way through Europe.  The yellow markings stand out quite nicely, giving the Germans an aiming point. 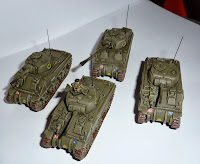 Front view of the same tanks.

5 Plastic Soldier Company M4A1 Sherman 75's, with US stars and tank numbers.  Lovely little models, these have joined my WW2 collection as my US troops were lacking any medium armour. 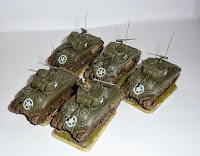 These have also been based as I like bases on my vehicles.  The Battlefront ones are not based as they are not for me and not everybody likes bases.  I do it because the figures are based and also because it gives the model some support.

One nice thing is that I managed to make up 2 extra turrets with 76mm guns.  These are mostly PSC bits, except for the left hand hatch which are spares from the Battlefront models.  At least I can give my M4's a little bit more punch.

These next pictures are a comparison shot of the BF plastic Sherman V(left), Peter Pug Sherman(center) and PSC M4A1 (right).  The BF Sherman is bigger, but not too badly compared to the Peter Pig one.  The PSC one is smaller but I prefer it personally.  Please excuse the painting on the Peter Pig model, I painted it many years ago and it could really do with being stripped and repainted.

Anyway, that's it for now as the in-laws turned up yesterday and I have to go and make nice.  Catch you all later.

Recently 15mm wargamers have been spoilt by the rapid influx of 15mm plastic model vehicles, allowing larger forces to be collected without breaking the bank or getting a 2nd mortgage.  As an example 5 traditional model Shermans will cost you £35 from Peter Pig, £35 from Battlefront or £32 from QRF.  This made a reasonable size armoured force quite expensive, prohibitively so for many people.  Then Plastic Soldier Company appeared and brought out 15mm models in plastic, with a box of 5 models costing £18.95, so just over half the price.

Battlefront then released their Open Fire starter set, which is a bargain if you want German infantry, US Paras or British Shermans, with all the models and figures being excellent.  I have recently painted up and sold some of the Open Fire Shermans, but still have 8 sat here to support a planned British force for CoC and/or Battlegroup games.  I also have a box of PSC Sherman M4A1's for my American armoured infantry force, as Stuarts are nice but no match for any sort of German armour.

So, heres my view on the 2 different plastic Shermans that I have to hand.  They are different versions of the Sherman, an M4A1 from PSC and a Sherman V or M4A4 from Battlefront, but this is more to view the differences in model style as much as anything else.

Battlefront produce their sprue of 21 parts in green plastic.  Of these you need 10 parts to make the tank, with the others being an optional open hatch, a 50cal MG, some stowage (3 rolls, 1 line of bags, 2 track lengths, 1  box and 1 wheel) and a commander.

PSC make the sprue in a cream plastic (which isn't attractive), containing 46 parts.  Of these you need 19 to make the 75mm M4A1 version.  The vast number of spare parts allow the construction of the 76mm turret and gun, the addition of skirts or various bits of stowage.  It also has 2 commanders, but the detail on these is rather less well defined than on the Battlefront one. 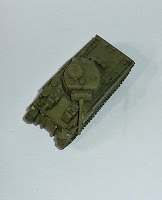 Of the two models, Battlefronts is easier to put together, but requires a lot more work to put together neatly.  I have made models in many scales and from many manufacturers and this Sherman was one of the worst for getting a good fit to the parts.  The sides wouldn't stay tight to the hull top despite the use of elastic bands while the glue went off.   However, the model itself looks good and with a little bit of filling it makes a good Sherman V. 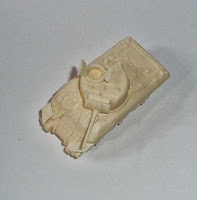 The PSC one takes a few minutes longer to put together and does require a bit more skill than the Battlefront one.  However, it goes together perfectly and the time it takes to put together is slightly less than the combined construction and filling time for the Battlefront one.  One nice feature is that all the joins between parts are hidden beneath the model as much as possible.  It also has separate tracks, which I prefer as you can paint the tank, then paint the tracks on the sprue before attaching them. 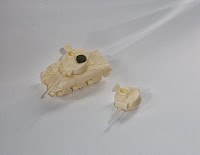 The PSC model is significantly smaller than the Battlefront version though.  Length is 52mm vs 60mm and width is 22mm to 25mm.  I am not that bothered which is accurate however, as both look good with 15mm figures.

One feature of the PSC one is the option to make the 76mm turret as well.  There are features that make this technically incorrect (the hull front is wrong for the 76 I believe), but it works ok on the table and I only need a couple of turrets as options for my Battlegroup force.  It does require the theft of the spare hatch from the Battlefront model to fill the second hole in the turret, but I have both here so I can do that.  Lucky me.

Battlefront gets 8.5, being marked down because of the difficulty of fitting the sides on neatly.  Apart from that its a good model and I am quite happy to use them to supplement my Cromwells.
PSC gets 9, because it goes together so well and also has all the options you need for either a 75mm or 76mm version.

Just as a note Battlefront also do a Firefly sprue, but this is a different sprue to the Sherman and is not an upgrade or modification.  Looks good though.

Off to do something productive now so I'll catch you later.
Posted by jcralls at 14:01 1 comment: