But an update is probably past due.  Things are not moving on with the planned operation and I am now totally f****d off with hospitals, tablets and nasal gastric tubes.  It's my four and a half year anniversary tomorrow from when I first ended up in hospital.  I wonder if the op will happen before I die of old age?  I have had the tube fitted more times than anyone else in Torbay hospitals records.  In fact I am such an expert on the bloody things that I now do it myself at home. It saves going to the hospital every 2 weeks I suppose.

I am feeling so crap, both physically and mentally, that gaming and painting have taken a real dive.  Hardly anything has been played, although I did get taken out to Panjo's new house for a game of Black Plague last week.  Apart from that sod all in the way of wargaming and very little painting has happened.

One of the few things that has been finished(finally) is a Reaper Bones dragon for future games of Dragon Rampant and Kings of War.  The Lurtz figure is just there to show its size.

I also did 6 Falschirmjager for Nathan, he does the basing himself  and they have been painted to match some he picked up on eBay.

Finally there is a change from the normal service, with a trio of Stadden 90mm figures. They belong to a lovely lady that my wife knows who served as a WREN with the Royal Marines, married a Marine and both her sons became Marines.  One of them is currently a Yeoman Warder at the Tower of London.  Anyway, her husband bought these figures many years ago and I was asked to repair and repaint them.  So, from left to right we have a 1980's Royal Marine in DPM, a RM Bandsman in dress uniform and an officer of the Duke of York and Albany's Maritime Regiment of Foot from the 1660's.  It made a change to paint something that large and the figures themselves are beautiful.  The level of detail is amazing, even down to the coat of arms on the drum.  She loved them, so it was worth the week of stripping and cleaning them, followed by several weeks of painting. 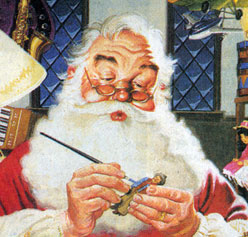 However, I have not picked up a brush since finishing them, so when Chris Stoesen of Wargamer's Odds and Ends contacted me about this years Secret Santa, I jumped in with both feet in the hope that it will revitalise things and shake me out of the doldrums I seem to be stuck in.  I can thoroughly recommend this scheme, I have partaken for the last 2 years and it's been great.

So, that's it.  It's now 0130 and I suppose I should go to try and get some sleep.  Seeing as I average less than 3 hours per night there is no real rush though, so perhaps I'll wait a bit.  Catch you later