The BAOR arrives......well, a small bit of it does anyway

It brightened up yesterday so I managed to varnish my Cold War British contingent. These are all from Armies Army again and yet again are lovely models with no issues that I have found. I got these last year but the painting mojo for them didn't arrive until recently, so I have finally got around to painting them all up. 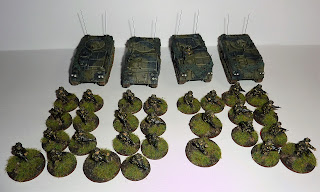 First up is the Mechanised Infantry platoon. Three squads of 8 men each with a GPMG and Caarl Gustav led by a 4 man command team with a 2" mortar.  All ferried about in four "mighty" Fv432s. Unlike Team Yankee these are available either with or without the peak turret, I decided on 2 of each just to mix it up a bit. 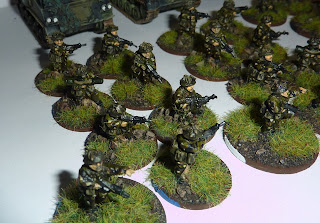 A closer look at some of the infantry and my attempt at 15mm DPM camo. I am fairly happy with the way they turned out but they are much more work to paint than Russians. 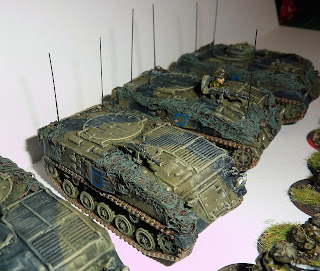 A closer look at the battle taxis, the Fv432. A similar design to the M113, basically a box on tracks, the 432 differed in being steel rather than aluminium and also being decidedly British by having a BV or "Vessel Boiling Electric". Basically it is a hot water system but I guess it wasn't military enough to call it a kettle. Still, +1 morale for having a cuppa in the middle of a firefight? 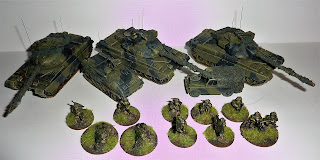 Now we come to the support options. At the front are a pair of Milan teams, a pair of Blowpipe SAM teams and a tripod GPMG team. I really need another Fv432 to carry the Milan teams about, along with a couple more figures to fill the ranks. Behind them are a Spartan APC for the Blowpipes and a Landrover for......well, I like them! Finally the heavy stuff, a trio of Chieftains ready to slap some T-72s around. I love the look of the Chieftain, it looks like it's going to ruin your day. 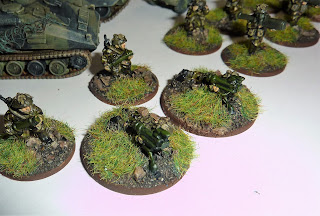 A closer look at the Milan teams with the Blowpipes behind them. 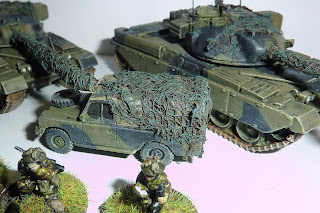 The Landrover is a lovely vehicle, I still want one if the boss ever lets me. I added the camo netting in the same way I did for the dutch, but didn't add the flock this time. I am not sure which I prefer yet so these "may" get flocked later. It's dwarfed by the Chieftain though, like most things are I guess. 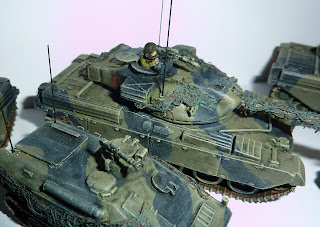 Finally, for now, we have the Spartan and a Chieftain. The Spartan is a small APC, only able to carry 4 or 5 soldiers, but it's quick. It was used to carry specialist units like SAM teams and recce troops while the bigger Fv432 carried the infantry about. Behind it is the command Chieftain, given away by the open hatch and commander figure.

So that's the lot for now. I still need to add a few things, some Scorpions and/or Scimitars, an Fv438 Swingfire carrier and possibly some more infantry to make an Infantry Combat team. Hmm, not just yet though cos we is skint. Apparently a new microwave and flowers for the garden rank much higher than figures for me. Good job I love her innit. ;-)

Anyway, that's it again. Catch you later.
Posted by jcralls at 09:07 No comments:

The Soviet Infantry arrives and so do some Dutch

I am still painting away at my 15mm Cold War forces. As I stated previously, my intention is to have a platoon with a few support options from several nations. So, without further ado, here is my Soviet Motor Rifle Company.........

Yes, that's right, my platoon purchases got a little bit excessive and now I have enough figures to field a full company with support options.

I now have 3 platoons each made up of 3 squads of 7 men plus 2 platoon command figures.  Then there is a 3 man Company Command group as well, making a total of 72 figures but that is not all of them, oh no there are more!

These are the support options I have painted up as well. First are two sections of 9K111 "Fagot" (AT-4 Spigot) ATGWs, 2 teams per section. Then we have two sections of AGS-17 "Plamya" grenade launchers, again with 2 teams per section. Add in a PKM machine gun section with 3 LMG teams and finally a SA-14 air defence section with 3 teams again. That's another 42 figures all told, making 114 in total for a game that I planned a platoon a side for. All these are Team Yankee figures that I picked up cheap here and there over the last few months.

I have no willpower at all. Now I need some more BMPs as I don't have enough for the figures I have.

In addition to the Soviet infantry I have also finished off my Dutch platoon with it's rather more limited support.  The Dutch organisation is a bit different to the previous German platoon, with three sections of 8 men lead by a command section of 7. Each rifle section has an FN-MAG lmg and a Carl Gustav rocket launcher while the command section has 2 M47 Dragon anti-tank missile launchers. These are carried around in 4 YPR-765, an improved M113 with more armour and a 25mm rapid-fire gun in the turret. A bit more capable than a basic M113 I think. Support is limited to a trio of Leopard 1 tanks which are technically the wrong version for the Dutch but they will do.

The infantry and YPR-765s are from Armies Army and are really nice models.  The detail on them all is great and the castings are clean and paint up nicely, even if your a bit ham-fisted like me. ;)

The Leopards are Team Yankee and are also nice, but why are they resin and not plastic like all the others?

The camouflage netting is made from dyed bandage sections, cut to size and fixed with watered down PVA glue, then painted up and finally flock was glued on.  I am not sure how durable the flock will be, but a few coats of varnish should increase the longevity.

Now all I need is a set of rules for them.  Initial plans for a Chain of Command variant are now in other hands as there will be an "official" version at some point, hopefully soon. Also there is going to be a Battlegroup set at some point as well. That's in addition to the copy of Force on Force that I have as well. Hmm, decisions decisions.

So that's it for now.  The British are done, just waiting on varnish but it's a trifle damp today to spray them. Up next....who knows? I sure as hell don't! Have fun folks.
Posted by jcralls at 14:01 No comments: