To face off against the American force, I have put together a smaller, but higher quality, British force.
Most of the British infantry are in the marching pose because I like it more than the other poses.  I always picture the British lines marching forward under fire, then stopping to deliver a close range volley.   I have tried to do each unit with a different facing colour, but have ended up with two "green" units, just slightly different shades of green.

23rd "Royal Welch" Fusiliers.
Blue facings, bearskins instead of tricornes and a goat!

The last two foot units are the combined light infantry and grenadiers.  As such they do not have a single facing colour, instead they have facings from each of the foot regiments.

Combined Light Infantry.
In round hats instead of Tricornes.

Combined Grenadiers.
Bearskins, except for the officer.

Royal Artillery.
Same uniforms as the Americans, which must have been a bit confusing. 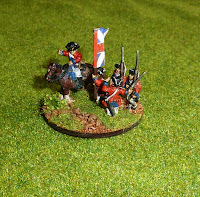 General.
With his bodyguard. 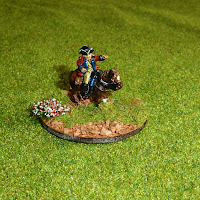 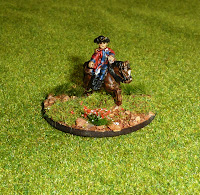 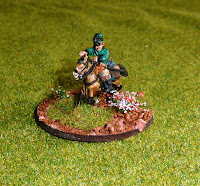 Three notables again, two in redcoats with blue facing, the other is in a green dragoon uniform.
Who could it be?