Kings of War is the fantasy ruleset from Mantic Games, recently updated to 2nd edition.  I have recently been tempted by an old friend who has started playing it and, seeing as I still have some of my old Games Workshop figures, I have decided to dust them off and see what I can do.  So, without any further delay here are my Dwarfs. 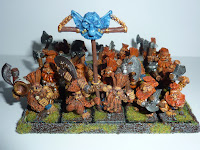 First up is a unit of Trollslayers, now referred to as Beserkers.  A hard hitting but low armour unit, they are either in good order or destroyed, there is no wavering with these guys.

Twenty warriors with 2handed weapons next, probably going to be used as Shieldbreakers with the Miners.

Twenty Miners, all with 2handed pickaxes.  Either a 2nd unit of Shieldbreakers or go with the warriors to make a 40 dwarf horde.

Plastic rangers with crossbows and big axes.  A more mobile unit with the ability to move through terrain, but a bit less staying power than the average dwarf.

Two 10 man units of Thunderers, one plastic and one metal.  I am not sure yet if 10 man troops or 20 man regiments are the way to go with these.

A 20 dwarf regiment of Ironclads, the stock troop and a pretty solid basic unit. 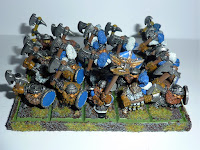 Some old Ironbreaker figures, these will either be Ironguard or another unit of Ironclads, depending on the size of the game. 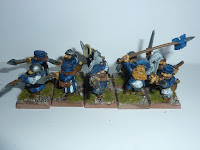 Some mixed figures including some spear armed dwarves.  I need some more of these to make up a unit of anti-cavalry Bulwarkers, but eBay prices for these old figures are ridiculous.

Heroes, leaders and specialists now.  From left to right we have a Warsmith, a Berserker Lord, a King, an Army Standard Bearer and an elemental summoning Stone Smith.

Heavy support options include a bolt thrower, an organ gun, two cannons and a stone thrower.  Not sure which I will be using, but these are the options I have. 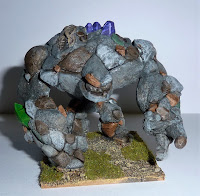 Finally a new addition, a Reaper "Greater Earth Elemental".  Slow and ponderous but damn tough, I am hoping this will see some use on the table.

So there they are.  Some of these figures are older than my kids and none have seen any use for many years.  It's recycling at its best!