Clotted Lard and To The Strongest 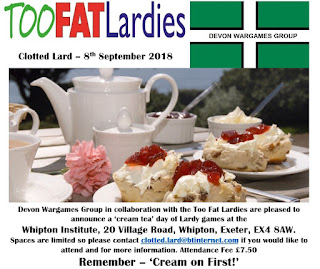 As a long time attendee at the OML days up in Evesham I happy to share this forthcoming event in Exeter. The Devon Wargames Club is teaming up with Too Fat Lardies to host a day of Lardie games on September 8th. Details are included above, but there will be nine or ten games put on ranging from ancients, pike and shot, Napoleonics, Colonial and World War 2. It's all about having a fun day out and moving toy soldiers around a table.

Last Saturday the DWG club meet included a game of To The Strongest, put on by yours truly. A force of nasty Saxon raider types was out to cause mischief, but had been intercepted by the heroic Britons in all their Romanised glory. I have only watched the game played before so it was a bit of a dive in the deep end, as none of the others had played it either.

The Romano-British had a few more options. They had a senior general with three units of spearmen with added bows and one each of light cavalry and skirmisher javelinmen. General two had the same force except the skirmishers had bows. General three was mounted and led the cavalry arm with three units of javelin and one of lance armed cavalry plus another unit of light cavalry.

The game went fairly well, the Saxons gained the upper hand quite early as neither Jack nor myself could hit anything.  Luckily the youthful generalship of Charlie(aka son of Jack) was doing better against Christophers Saxon warriors. Jacks center line managed to steady after some good hits and my cavalry managed to lure some of JJ's warriors out of the woods and then outflank them on both sides.

In the end the game was won by some really unlucky armour draws by the Saxons, as the flanking cavalry routed two units and then Charlie saw off another. I like the way the rules play, it gives a fairly quick game and doesn't take long to get the system into your head. I plan to get my Republican Romans out and restart painting them, so more may be seen of this set of rules soon.

Thanks to Jack, Charlie, Christopher, Nathan and JJ for playing the game and JJ again for the pictures.

Dark Ages and a wee boat

It's been a long time coming, but here is another small update. Things are ticking along as before, good days and bad etc. I have managed to get a bit of painting in and even a bit of gaming. Painting wise has mostly been Dark Ages troops for my collection. After starting out painting enough for Dux Brittanarium games, between 30 and 40 figures each side, I now have enough(almost) for a To the Strongest game with over 100 figures each side. 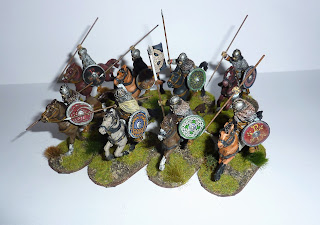 So here are the newly painted figures. First up are 8 cracking Romano-British cavalry from Footsore miniatures. They are some of the best figures out there in my opinion and I will, eventually, get some more. 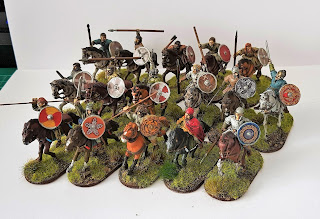 Then we have some plastic Gripping Beast and metal Black Tree Design cavalry. The Gripping Beast ones are ok, saved by the cost compared to metals but certainly not up to the standard of the Footsore ones. The Black Tree figures are nice, but the amount of work that needed to be done to the horses puts them off the future buy list. Sort out the molds fellas! 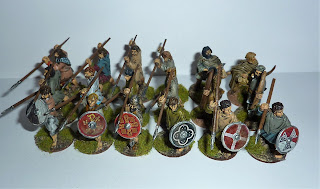 The next five photos are all Gripping Beast foot figures that I picked up on eBay for not much per figure or left over plastics from my Dux Brit forces. All together there are 117 assorted foot, a mix of spears, javelins, musicians and standard bearers. 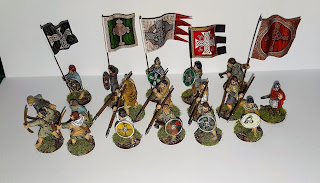 The shield and banner designs are all from LBMS and very nice they are too. 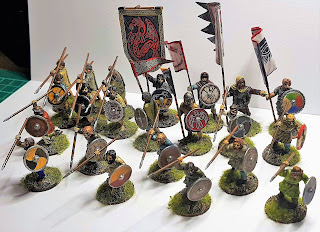 I had thought I would have enough with this lot as it gave me a total of 32 horse and 240 foot but alas, I need some more archers. 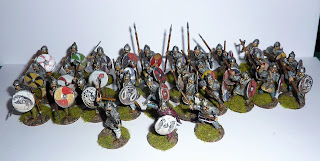 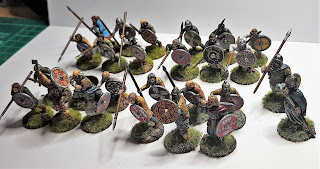 The reason for this is my To the Strongest Romano-British force has quite a few units of light infantry archers. I don't know if they are any good as we have only played the game twice, but I can have them so I will. 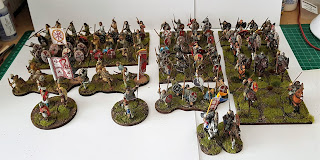 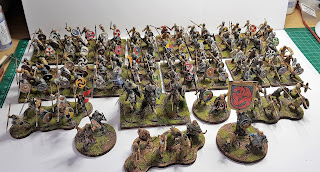 To face the Britons I have also put together a Saxon force. Three generals, one cavalry, eight warriors and three units of light infantry. A blunt instrument to be fair, but different to the Britons.

The other bit of painting I have done is a bit different, a small boat from China via eBay. It came as a plywood kit and looks pretty decent for a motor launch type of thing for future games. I have hidden some magnets under the deck so my pulp figures machine guns can be mounted on deck. 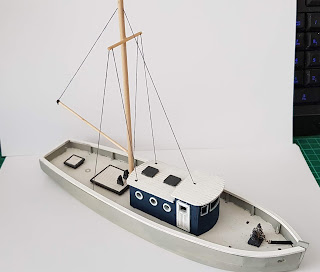 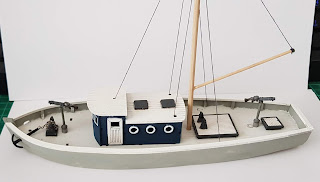 And that's it for now. I am playing To the Strongest at the Devon Club next month, so there will be a report on that at some point. Adios for now.