New rules, yet another project and problems with Fv432s

Hello again folks, I'm back again with another rambling post.
First thing is to point out that Too Fat Lardies have a new set of rules covering skirmish actions in the Roman period. Infamy, Infamy looks like it will be a lot of fun to play and doesn't require masses of figures like most ancient rules do. Have a look at the videos on YouTube to see what size the typical forces are. I'm looking forward to it arriving and, hopefully, the lift on the Covid rules so I can play it. 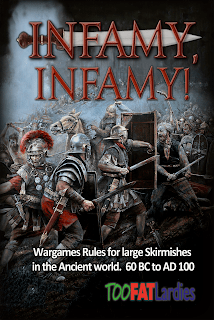 This leads to an obvious new project, Romans and Barbarians for this set of rules. I have a few Ancient British troops already, but they are based on 40mm squares and don't really work for a warband skirmish. One problem is that I like to have both sides for games so that I can run games for friends who don't have forces for it. So what to get. I am waiting for the rules to turn up before I decide what to buy, but initial thoughts are Ceasarian Romans and Gallic types. So that's going to take up my money for this year I think. Also this is subject to me being able to see well enough to paint the damn things at some point soon.
Finally for this ramble it's back to the Cold War project. I was up late as I couldn't sleep again, this can prove to be a bad thing and it was for me on this occasion. In a moment of weakness at 3am I was browsing and came across an online store that had Team Yankee Fv432s and British infantry in stock. A couple of minutes later and I had ordered said Fv432s and infantry. My willpower at 3am is obviously weak. Anyway, they duly arrived and were opened up. The infantry are fine and match up with my existing Armies Army infantry nicely. The Fv432s though are another story. Now, if I had been looking at ordering these at a normal time of day I would have done a search for a comparison of the two, but at 3am this doesn't spring to the front of the queue. Once I had them though I thought they looked a bit small. So I did a search and lo and behold, a review pointing out the size difference is out there. Arse! So the Team Yankee model is smaller than the Armies Army one, noticeably so. Also it doesn't have the option of a peak turret, although it does have the options for a Swingfire armed Fv438. So now I have 5 Fv432's that are smaller than the 5 existing Fv432's I have. I am now going to have to decide if I want to keep them or wait and hope that Scotia Grendel are going to release the Armies Army models at some point.
Ah well, decisions for another day as I am off to drop presents for one of the grand kids birthday. Adios for now folks, stay safe and keep gaming
Posted by jcralls at 12:39 1 comment:

Hello again. I have managed to get a wargame in, although it was on my phone rather than in person. My mate Nathan , aka Stumpy, set up a 28mm Napoleonic game using the newly released Vitoria scenario book for General d'Armee.

Nathan just about managed to put together enough figures to play the game........just kidding, he's got so many Napoleonic figures he can probably redo Waterloo on his own.  I had the Allied force while he took his French out. I won't go into any detail as part 1 is on his blog and part 2 will be up soon, hopefully. It was very enjoyable, even if it did break Nathan with all his running about moving everything for both sides. It took 3 sessions to finish as the poor old fella was having to do everything except roll my dice for me. The scenario is interesting, with the Allies attacking a nearly equal sized force but having better, potentially, command.

My force was 11 regiments strong, including 4 veterans and only 1 reservists, with 1 battery and 14 bases of skirmishers. Of these 1 brigade of 3 regiments was in reserve until turn 5.. The French also had 11 regiments, only 1 veteran and 4 reservists. They also had 1 battery and 12 skirmishers, but the 4 reservists were all in reserve until Nathan had an adverse result on a Brigade morale roll. The game is also limited to 10 turns, so the Allies have to press on and get in there quickly. So please pop over to Nathans blog and have a look, it was a good battle and it might make him hurry up and post the final part of the battle. A final big shout out to the 8th Cacadores, they gave his French one hell of a beating!

In other news I have put some paint on some lead. It was a struggle, painting them in 10 minute slots every couple of hours to try and prevent the headaches, but they are done. Huge they are, massive even! Yes, I painted up some of my long unpainted 6mm Cold War vehicles for future games of Battlegroup Northag or the Cold War variant of IABSM. Over 100 vehicles, a mix of British, American and French, plus some generic infantry.
First up is 15 Bradleys, 2 Sultans, 1 Spartan, 1 Fv432, 2 Land Rovers and 20 bases of infantry.
Then 20 Warriors and 24 Fv432 APCs for the British army.
Finally some French with 4 AMX-30s, 24 AMX-10Ps, 6 AMX-13 and 2 Shanine SAM vehicles.

I still have some Challengers, Scimitars etc to paint, but I am in no rush as I already have enough of them for any scenario I will do.

So that's the lot for now, I am off to do something more or less productive. Take care folks and keep playing if you can.
Posted by jcralls at 09:18 No comments: