I have been away on holiday with the family but have returned. Sadly my father-in-law passed away last Wednesday so it wasn't the best week ever.

Wargames wise, I have bought yet another set of rules. To be fair these are probably the least demanding in terms of figure requirements, but it's still wargaming. I have played several Gladiatorial combat systems over the years but never found anything I was happy with. 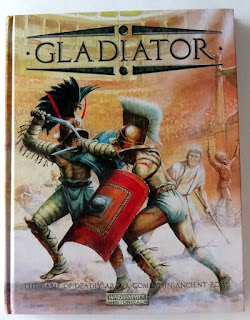 The most recent was Warhammer Historicals Gladiator set, now long out of print and very pretty. However they didn't do it for me, so they were consigned to the shelf and the figures I had were put away in a part finished state.

Then Northstar came out with a newsletter including a new set of Gladiator rules called Sons of Mars and the preorder deal included a pack of Crusader Miniatures Gladiators of your choice. A few quid was quickly spent and I eagerly awaited the postman. 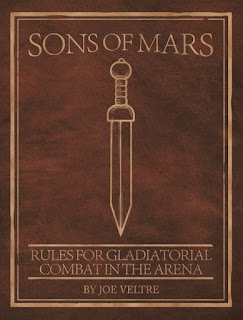 So a quick review is in order I guess. The book is a decent quality softback and reads nicely. The rules are only a few pages, less than 20 in all excluding character skills. The rest of the book covers the Gladiator types, 17 in all, beasts, skills and a very nice campaign system to build up your own Ludus. There are even tables to allow solo play, with the actions of the opposition being determined by their best capability in a fight.

The basic system is opposed dice rolls using D10's. Initiative is diced for using Agility, so the lighter(and quicker) fighters tend to gain an advantage. However a +2 modifier isn't overpowering, so there is always the chance that the heavy weight will sneak in and attack unexpectedly. You can appeal to the crowd to gain a favour dice, but if you fail it may give the extra dice to your opponent!

The basic Gladiator stats give the core capabilities for your fighter which are then modified by their weapon choice and their skills. The skills are what makes the system for me, the ability to get an extra dice for that crucial fight, reroll an armour save or even breakaway from a fight all make your fighters different. Do you equip your man with a Gladius, good in a sustained fight, or give him a longer Spatha which will give him an edge if he charges? Does he take Impenetrable, allowing a single armour reoll, or Shield Bash, allowing rerolls in all Push tests in the combat?

I really like them, so much so that I got my gladiator figures out and painted up the unpainted ones, then rebased them all to use for this system.

Here are the previously painted ones. Some even came painted from EM4 miniatures many years ago. Not 100% sure but I think that these are mostly West Wind figures(now OOP I think), plus the four from EM4.


Then we have the newly painted ones, all by Crusader Miniatures and very nice they are too. All told I have 27 figures now covering all the main types I can see me needing.

As I said earlier there is a campaign system and tables for controlling the opponent, so I have been playing with myself (ooh err missus). My Ludus has gone from two fighters to four in three game months. Of the original pair Clovis the provocotar is unbeaten with 7 wins and is a regional champion. Drakon, a hoplomachus, has a record of 5 wins, 1 draw and 1 loss. In March they were joined by Atticus, a dimachaerus with a record of 2 wins and 1 loss. Finally Britannicus the secutor was bought and has won his only fight so far. The Ludus has a balance of 90 coins but is at its maximum capacity for gladiators, so 200 coins will upgrade to a capacity of 6 and allow me to hire specialists such as a doctore(trainer) and medicus etc.

It is a good game and provides plenty of fun, even on your own. If you like gladiator games then consider this one.

That's it for now, I am off to the hospital again tomorrow for the results of tests and to see where I go from here. Six months of pretty continuous infections in my stomach is getting very wearing now. Sadly I will not be able to go to the Other Partizan either, due to my wifes father passing away. Ah well, I doubt that he did it on purpose. Catch you all(or both) later!
Posted by jcralls at 12:11 2 comments: