Legionary plans and a bit of painting

Tomorrow is Exeter's premier(only) wargames show, Legionary. I am ineptly assissting Nathan with a 28mm ACW game using the Pickett's Charge rules I reviewed recently. The scenario is based loosely on Blochers Knoll during the Battle of Gettysburg.  Hopefully it will work well, hopefully.......

As it clashes with the monthly Devon Wargames meet this year, Jon "JJ" Jones is also putting on a game, using his exquisite 15mm Napoleonic forces. So a decent showing from the club, hopefully enough to drag along some new members.

I have done a bit more painting, although not that much. 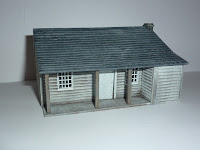 First up is the Renedra/Perry Miniatures ACW house. This came in the Battle in a Box set I bought and I finally decided to get it painted. It goes together easily enough and can be modelled with doors that open, with a bit of care when gluing it anyway. I went for a generic white(ish) structure with grey roofing. Looks ok to my eyes, but I do wear glasses! 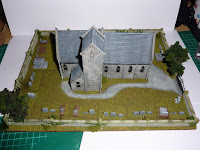 Then I broke away from 28mm for a change. I bought the Landmark building set way back in the distant mists of time, when Battlehonours UK released them. Since then I have gradually based up some of them and decided I needed a church for my expanding 15mm town. 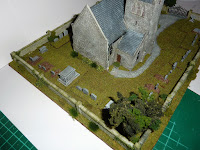 I repainted the church as it was originally a bit too green, so it is now a nice shade of grey, well several shades actually. It was then based on a bit of hardboard and walls were added, also from the Landmark set. A couple of trees were made and stuck onto the base and gravestones were purchased from several places and put onto Flames of War bases so then can be removed if needed. Finally it was all flocked, grassed and tarted up. 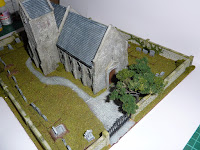 Hopefully it looks ok, it took a bit longer than I expected, primarily because I kept getting distracted, but it should look good on the table. 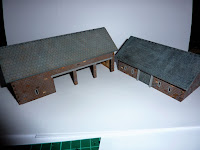 At Crusade way back in January I bought a couple of 15mm barns from Original Laser Designs. Quite simple to look at, they went together very easily and painted up quite nicely as well.  At some point they will be based up to add to the town. 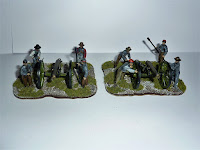 Finally I painted some more ACW. Yes, I know I said I had finished. Yes, I know I have no willpower, but the guns were sat there all forlorn and unpainted. So I painted them.  Two each for the Confederates and Union, each with four crew. So that really is it, until I buy some more tomorrow! 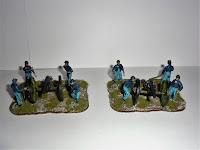 Adios for now and if you are in Exeter tomorrow say hi, I'm the ugly fat bloke helping on the 28nn ACW table.
Posted by jcralls at 13:10 2 comments:

Well, not really but it seemed like a good title for this post.  I have finally finished* the Confederate force to face Union troops for Sharp Practice.  The force is identical in composition to the Union force, with six units of 8 infantry, two units of 6 skirmishers, one unit of 8 mounted or 6 dismounted cavalry and assorted leaders etc.  All told it is 77 foot and 11 mounted figures. 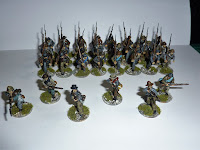 Photo one is 24 infantry with right shoulder arms, along with a skirmisher screen of 6 men.  The infantry are all Perry Miniatures plastics while the skirmishers are a mix of plastics and a few metal Wargames Foundry to mix them up a bit. 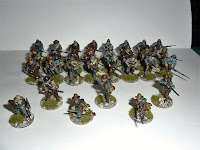 Photo two is another 24 infantry charging/advancing, again with 6 skirmishers.  Same composition as above. 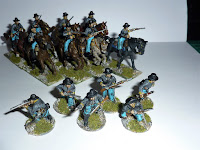 The mounted cavalry are also Perry plastics, with a few conversions to try and match the foot figures.  The foot figures have assorted weapons, 2 each of shotgun, carbine and rifle, so I have tried to replicate that with the mounted figures.  Some cutting and chopping, several moments of gluing my fingers to bits of metal and/or plastic and a few choice words later and the end result is mediocre to say the least.  They will do though. 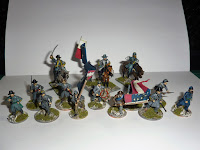 Finally we have the commanders and "extras".  There are three mounted officers, one based with a standard bearer to make him more commanding.  The state flag of Texas flag has been used to mark the senior officer.  Six foot officers make up the rest of the commanders, supported by a drummer, two standard bearers and a physic/surgeon.  The standards are those of Hamptons Legion as they spent some time in Hood's Texas Brigade and I like the flags.  There is also a sneaky Union type in this picture, I knocked together a surgeon for the Union force from a left over plastic figure.  You can tell they are medical types by their green sashes, the Confederate one even has a cigar of "good southern tobacco".

* When I say finished, that's an obvious wargamers lie.  I still have the artillery to do, then there are the other bits I could add later like snipers, more cavalry etc.  It never ends, despite what I say to my wife. 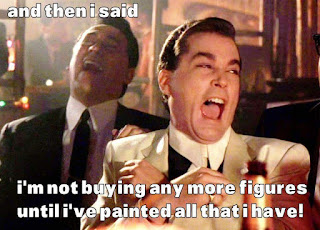 So that's it again, two posts in two days should be enough for anyone.

Well the op is done and I am now free of the tube stuck down my nose.  Instead it comes out of my stomach, so same problems but a lot less obvious.  The op went well and I got an early release the next day for good behaviour.  I think it was good anyway.The bad news is my stomach now has a new hole in it and 3 stiched up holes that are itching like an itchy thing.  Happy days though.

To speed up my recovery Nathan came around last Sunday and we tried out Pickett's Charge, the new American Civil War ruleset from Too Fat Lardies/Reisswitz Press.  Following a bit of a mixup with a review in WSS that was really badly written, we decided to give it a go.  Nathan had played it at the last meeting of the Devon Wargames Group, but I only watched a couple of turns before leaving.  We set up the McPherson's Ridge scenario out of the Summer Storm Gettysburg book and had at it. The scenario had two Confederate Brigades from Heth's Division attacking two Union Brigades from Reynolds 1st Corps.  The Rebs also had a massed battery of 20 guns deploying in support off-table, which would turn out to give the Union troops a fair old slap.  Nathan took the dastardly seccesionist rebel typs and I took the valiant defenders of the Union.

The Union force consisted of the cream of the Army of the Potomac, 1st Brigade, 1st Division, 1st COrps, aka The Iron Brigade.  In total there were 45 infantry stands and a 3 gun battery.

The Confederates only had 37 stands of infantry, but did have support from 5 batteries of guns off table. 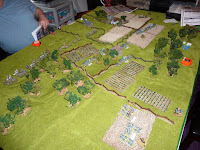 The initial deployment had Davis' Brigade facing off against the 2nd Union Brigade while Archer was massed behind a small wood facing the Iron Brigade. 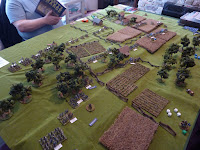 First turn saw the Iron Brigade double-quick forward as the Rebs hesitated behind the wood..  Johnny Reb and Billy Yank exchanged fire along the ridge and the Reb massed guns fired counter-battery and hammered the sole Union battery.  Nathan's ability to roll a 4+ on casualty dice was working at 80%, 'cos he's a git. 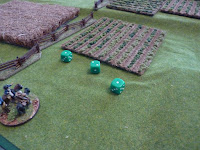 The second turn was noticeable for the complete lack of Union ADCs.  Three D6 rolled needing 3+ for an ADC to be available.  Yeah, right. 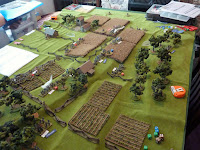 By the end of the second turn things had gone a bit awry for the boys in blue.  The Iron Brigade "hesitated", unnerved by the scarey woods apparently.  The Union battery fell back as it was getting pounded, replaced in the line by the green troops of the 147th New York infantry.  Things went from bad to worse at the end of the line however.  Nathan managed an 11 on his artillery fire, causing the 76th New York to take a "See the Elephant" test.  I promptly rolled 3 on 2D6 and they fell back 30cm in a "whipped" state. 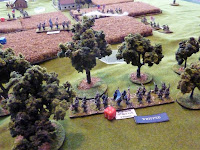 Not good, not good at all.  I was struggling by this point so we called it a day there and put it on hold until Monday, luckily it was a bank holiday so Nathan was free to come over again. 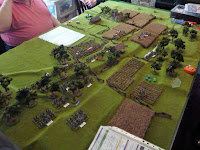 Day 2, turn three and the Iron Brigade pushed into the woods.  On the ridge the Rebs were now organised and there concentrated fire was causing a few casualties. The Union 2nd Brigade was taking a heavy battering all along the line, although they were hitting back reasonably. 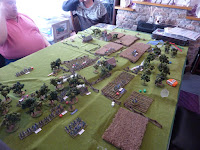 Turn 4 and the fire from the rebs was enough to drive back the 84th New York with yet another "whipped" result, leaving the 220 men of the 95th New York standing alone against over 700 advancing Rebs.  Things were looking grim on the right........ 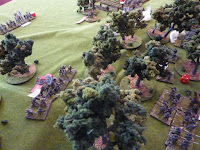 I forgot to take any further pictures, but the Iron Brigade swept through the woods like a tsunami, driving all before them and opening the flank of the Reb line up.  The 2nd Brigade managed to Rally, regaining some points it had lost and things were looking grim for the South.  Turn 5 saw both sides roll and get all theiir normal ADC's, plus an extra one each as both rolled two 6's.  It takes three ADC's to rally a Brigade and it can only be done once per game on each Brigade, so it is a rarity.

Pickett's Charge is a good set of rules.  The system is straightforward and doesn't take long to get sorted in your head.  Each turn you, as a divisional commander, get some ADC's to "assist" in commanding your brigades.  They allow re-rolls or special orders to be used.  Each Brigade rolls for command, if it fails it cannot advance but can still fire etc.  If it passes it does whatever you ordered.  Turns are igoUgo, but with a twist.  Each turn there is an initiative roll and the winner decides who goes first.  If you go first the other side can react to your moves, but you get to charge, move and fire first and can inflict casualties before they fire back at you.  It is a simple system but has enough nuances to make it a good system.  Troop quality goes green, regular, veteran, old lag and elite.  Old Lags are good troops who are battle-weary.  Good in their own way but difficult to get to attack.

All in all I would highly recommend Pickett's Charge to anybody looking for a set of Regimental level rules for American Civil War games.  I ordered them myself after playing, so it has cost me money already.

That's it for today, I am off now to base up some Rebs for Sharp Practice, then it's back to the hospital tomorrow to check my tube.  Keep rolling those dice folks.
Posted by jcralls at 12:03 No comments: