Too many new rules to keep up with

First up, apologies for the absence.  Things have been a bit rocky on the health front again so I have been keeping my head down and trying not to upset anybody.  Enough about that, onto wargames.

Gaming has again been somewhat limited.  A few Lion and Dragon Rampant games has been the limit of my action for the last few weeks.  It has got me painting some of the plastic/lead mountain though, which is good.  The rules are straightforward and give a decent game in a couple of hours, even if some people just choose to ignore the army size rules and do their own thing. ;0) 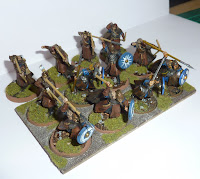 So, first up we have a unit of Rohan infantry.  Most foot units are 12 figures in Dragon Rampant, so that is what I painted.  My thoughts are that they will be light infantry with added missile weapons, the leather armour and wooden shields rule out counting them as heavy infantry.  I will paint some more, this is just the first unit for a Rohan force.

The majority of my painting has been Uruk-Hai for an Isengard army as raised by Saruman in Lord of the Rings. 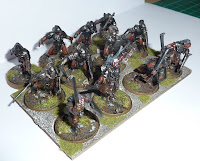 This is one of two units of 12 Uruk-Hai foot.  They are going to be "offensive" heavy foot, due to the heavy armour, big shields and large swords.  There are 12 more waiting to be painted but I have some 15mm tanks to do first. 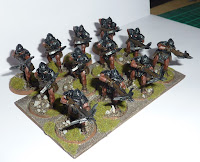 The next unit is another 12 figures, heavy missile troops this time.  These crossbow armed figures are going for stupid money on ebay, so the odds are adding another unit are somewhat low. 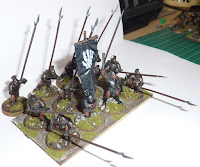 The final full size unit is 12 Uruk pikemen, used as heavy foot with the Wall of Spears ability.  Less attack orientated but very handy against the Rohan cavalry.  The standard does nothing in the rules, it just makes the unit look nicer. 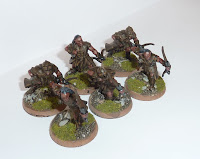 The first support unit is a 6 strong unit of scouts, giving some skirmish ability as well as adding a bit of firepower.  Very fragile but also very annoying, these guys can run through the woods and are hard to hit. 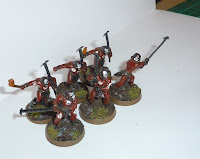 Then some heavy hitters.  These 6 berserkers are used as Bellicose Foot with "Shiny Armour" to represent their toughness in the films.  They are a bit of a loose cannon with "Wild Charge", but they can really upset enemy units if they can get a charge in. 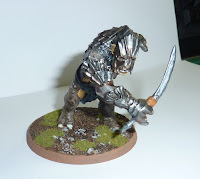 A troll Captain adds some serious grunt, I use him as elite foot with venomous to represent his mighty strength.  Currently I only have 2 trolls, so he operates as a single model unit.  Another troll has been obtained on ebay and then the trio will form the unit together. 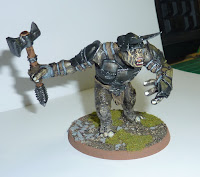 Troll 2, equipped with a mighty large hammer.  I really like these figures, they are lovely to paint and have a lot of detail and expression.  The ebay troll is the same figure but I will try to reposition the arms to make them a bit different.

The whole army of Isengard, gathered to reap havoc on the westfold.  It consists of 60 Uruk-hai, 2 trolls and Saruman currently.  I have 6 more archers, 12 more foot and 6 Warg riders to paint, as well as the third troll.  That should be enough I think.

Finally I have started on troops for my latest "new and shiny" set of rules.  I have preordered the new set of Sharp Practice from Too Fat Lardies and have decided to do the American Civil War.  Other members of my local group have Napoleonics and the American Rebellion ahem, Revolution covered already, so I have doing the later conflict.  So far I have 60 Union infantry ready to go, next up will be some Confederate types to fight them.  One thing I am considering is getting some of the Perry's "British Intervention" figures to do some what-if scenarios.  Plus it's an excuse to buy some more lead.

So that's it for now.  I am looking forward to the local Legionary wargames show in 11 days time in Exeter, then we are finally getting back to visit Partizan up in Newark 3 weeks after that.  This is my favourite show in the country, but events have transpired to prevent any visits for the last few years.  Really looking forward to getting back up there and seeing some old friends again.

Right, I'm off to prep some Confederate infantry.  Catch you next time.
Posted by jcralls at 23:27 1 comment: