It'a 01:23 and I should be trying to sleep.  However, as usual my body has decided that it's not up to me and so I am sat here wide awake again.  I remember being able to sleep for 8 hours, but it's been a long time since I got anything close to that.  Ho hum, it could be worse, at least I'm not Craig Joubert! It's bad enough that he so obviously screwed Scotland over, but to then be told by World Rugby that he screwed it up...........

Anyway, I managed another couple of hours of gaming this week.  Four of our group decided to go in for the Blood Rage kickstarter and it arrived a few weeks ago.  Last night we gave it a go, well the other three did while I checked the rules and adjudicated on any fights"disagreements" over the actions/events/cards etc.  The game is good, it's easy to learn the rules but there are a lot of things to make it interesting and entertaining.  Highlight for me though is the figures.  They are beautiful and I can't wait to get started on painting some of them.

Here are a couple of pictures of some of the miniatures.  The sculpting is awesome and I just hope I can do them justice when I finally get to slap some paint on them.

All told there are over 80 figures in the set, including the 7 large monsters.


We have also just gone in on the Urban Apocolypse Terrain kickstarter from Battlesystems.  We are getting enough to do a 4' square area, so a nice big table for any sort of modern/post apocolypse game.  It's going to be great to play all sorts of games on and I may finally find a use for some of these modern figures I have here.

Finally, I now have a date for my visit to the hospital.  Next Tuesday will see my freedom curtailed as I go in to have a longer tube fitted.  Annoyingly the duration of my visit has extended from the overnight visit the doc casually mentioned to a 4 day/3 night stay minimum, more if there are any "complications".  Not impressed but I am glad that something is finally happening.  Here's wishing for a lack of complications and an early release for good behaviour.

Well, that's it.  I am trying to paint some Perry Miniatures Afrika Korp figures but the mojo just isn't there.  I'll probably end up playing World of Warships instead.  Catch you all later

Finally did some painting and things are moving ahead

Sadly not much gaming has gone on lately.  I popped in to see the Devon Wargames meet last Saturday but didn't stay long as I felt rough.  Some nice games again, 28mm French Indian Wars, 15mm WW2 and Star Wars X-Wing were all played.  More info on the blog link above.

I also managed about an hour and a half at the Monday night game.  Zob and Colin were playtesting Fighting Season while Panjo and Andy were killing zombies again.  Shame I couldn't stay longer but yet again I felt like crap.

I have finally finished some figures though, so it's not been a total wipeout.  Yes, they have taken me a couple of weeks instead of a couple of days, but at least I got them done finally.  So, here they are.  Yes, it's more Warlord WW2 Germans, but these are the last of them that I have here.  I will probably get some of the new Falschirmjagers to play about with, but not just yet as finances are a bit tight.

These 32 figures amount to a platoon for Chain of Command or a reasonable base force for Bolt Action.  Organised into 3 squads of 10 men plus a couple of officer types to lead them, these are the early war figures as opposed to the later war Grenadiers.

Speaking of Too Fat Lardies Chain of Command rules, there is a new release out in their "Pint Sized Campaigns" series.  Operation Martlet covers the actions of the British 49th Division against the German 12th SS "Hitlet Jugend" prior to Operation Epsom in Normandy 1944.  All the previous campaigns have been great to play and/or run, so I am looking forward to this one.

Right, leaving wargames now to less pleasant things.  My ongoing medical problems are hopefully coming to a crucial point.  In a few weeks time I will be going back to hospital to have a ryles tube placed from my nose down into my small bowel.  If it works then it's good news as it means they can do something to fix it, if it doesn't then I'm stuck like this.  Here's hoping that the tube works then.

So I am back from deepest darkest Chelmsford and the prognosis is more positive.  New consultant reckons he can help me and has a plan of attack to deal with my stomach/intestinal problems.  Hope has reappeared and it's nice to feel a bit positive for once.  I may end up under the knife and with a gastric pacemaker, but if it helps then it will definately be worth it.

The only other bit of good news is that Wales have got out of the group stages of the Rugby World Cup.  Still have to play the Aussies tomorrow, so fingers crossed for a win for the Welsh.

I will update again when I have done something wargames wise, but for now that's all folks.

Zombicide, a few tanks and off we go

Sorry but I'm here again, just when you thought you were safe.

I have done little in terms of gaming or painting since I was last here, hence the lack of updates.  I have played a couple of games of Zombicide with the lads on Monday nights and last week we had a bash at Lion Rampant again, but that's been it.  I don't have any plans for anything major either.  I am missing this Monday and probably the following one too, so gaming is going to be really light for the next few weeks.

I have managed a small(very small) amount of painting so here are some dodgy looking pictures of some averagely painted figures and vehicles. 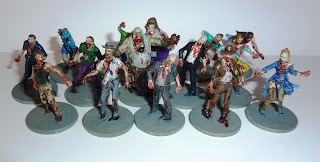 First up is some Zombicide figures, 15 assorted zombies that I needed to get finished. There are 9 walkers, 4 runners and 2 fatties, which finishes my share of the group purchase for seasons 1 and 2 of Zombicide.  I now have season 3's zombies to do, but that's going to take a while. 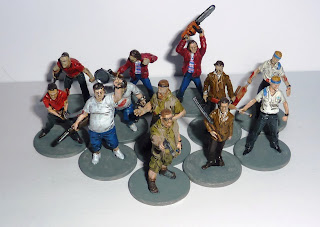 Then we have a few of the survivor figures.  I painted them to look like they do on their cards, at least as closely as I could anyway.  They are based on (left to right)
Steven Seagal in Machete, Nick Frost in Shaun of the Dead, John Goodman in The Big Lebowski, John Cleese in Fawlty Towers, Simon Peg in Shaun of the Dead and, at the back, Jack Nicholson in The Shining.  Nice enough figures as usual, my favourite is John Goodman.


The rest of my efforts have been aimed at my ever expanding 15mm WW2 collection.  The recently finished Russians have some reinforcements in the shape of 3 BT-5's and a massive KV-2, all made by Zvezda and easy little kits to make and paint.  That is it for the Barbarossa Russians now, I don't need anything else for them. 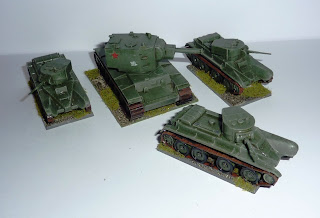 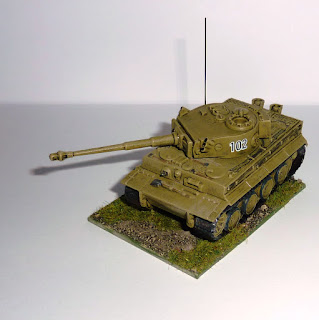 Finally I painted up a Plastic Soldier Company Tiger tank that I ordered in a sale they had.  I usually prefer the more common Panzers but it is nice to have some options available for the Germans.  I need to add some more weathering to it but I am happy with it at the moment.  I need to get a new pot of MiG powder to dirty it up so it'll have to wait until I get into town.


So that's it for wargaming over the last month.  Not much to report and it's looking pretty rocky for October too.


I am off to Chelmsford tomorrow to see a consultant surgeon in the upper GI department.  Quietly hopeful that he may be able to at least alleviate my problems if he can't cure it.  Appointment is on Monday, but we are staying up there as travelling wipes me out.  Most things wipe me out at the moment, so I hope he can do something about it.

Well, that's it.  I'm off now to prepare for the England-Australia game.  Not saying who I'm supporting but I won't be too upset if Australia win.
Posted by jcralls at 18:48 No comments: