A slow week, but the outlook is improving

Last week was noticeable for its complete lack of gaming.  Monday night saw the whole group of us go down to the cinema to see World War Z, aka "A movie to show off Brad Pitts long hair".  While it claims to be based on the novel by Max Brooks, the only similarity is the title.  Zombies moving like olympic atheletes and no sign of the Battle of Yonkers or the Singh Square.  Its a fair film I suppose, but it could have been so much better, 5 out of 10 for me.

Due to Gus' poor health and both Nathan and I lacking access to a car through the week we didn't get together to play anything.  This week Gus is feeling better so we have scheduled Friday for a game of Maurice, which will be nice.  Unfortunately Nathan is babysitting some of his grandchildren up in Sheffield, so he is going to miss out.

Painting wise I have been slowly grinding through some bits and pieces.  I got 16 Gripping Beast plastic Dark Age warriors done to replace the Wargames Factory ones I have been using.  Another 18 to go and thats the Romano-British done again.  Then I just need to inspire myself to paint up enough for the Saxons and I will have enough to play a game here.  I also did up my Peter Pig American infantry, the start of a new force for BGO and CoC.  So far I have 38 figures done, which is enough for a platoon.  To mix up the figures a bit I am waiting to start on a Battlefront platoon now, which should give me enough figures to field 2 platoons for BGO.  I have some Shermans waiting to be finished, as well as some Jeeps.  All I need now is the halftracks and I am on my way.

I also got a few German bits done, a 37mm flak gun and an Sd10 with 20mm flak on the back.  No idea why I have them, but I do and they are painted now, so they will join the German troops I have already.  On the pegs now are some French Guard Lancers, the final 20 of a 40 strong unit.  Then it will be onto some 15mm Highlanders for Waterloo.  Does anybody sell Tartan paint yet?

The best result I have had has been a new addition to my painting desk.  After years of making do with a normal palette to mix paints on, I have been forced by the hot weather of the last few days to try something new.  I have had the problem of the paint drying out so fast that it has been problematic trying to paint anything.  My nice big 3 window painting area has meant that the temperature has been slightly excessive.  Basically it makes my painting room a greenhouse as it gets the sun from sunrise to sunset, which is usually a good thing.  Open windows didn't help as there was no breeze to talk of and the fan seemed to exacerbate the problem.  The remedy has proved to be a wet palette.  I have heard people mention them on various blogs but always thought that I wouldn't need it, after all I live in sunny wet and mild Devon.

A quick search on the wibbly wobbly web and a plan came into focus. Most people use a blister pack that they can reseal but I didn't have any to hand, so I used an old take away container.  Some foam from Battlefront packs, some baking paper (actually cup cake paper laid flat) and a small bit of water and there it was.  Its bleeding awesome and I should have tried it long ago.  The paint stays wet for ages and painting is back on.  Happy smiling faces all around now.

Just to really make the week complete the Lions gave the Wallabies a right stuffing, then a Scotsman won Wimbledon.  All in all not a bad weekend really.
Posted by jcralls at 21:01 1 comment:

Last week brought another chance to visit Stumpy Towers, this time for a game of Battlegroup Overlord.  Gus was attacking with a British Infantry force while Nathan defended with German Infantry.

Nathans initial line of defence consisted of an Ost platoon spread over the frontline, some in trenches, supported by a HMG, 2 MG bunkers, a pair of Pak 40s and a nasty 88 on the hill.

Gus started of with most of his infantry platoon, his forward observer and 3 Churchills.  He piled most of this force, except the observer, on the right flank as it gave better cover from any long range 88 fire.

Nathan quickly called in some artillery fire and managed to get hold of some 210mm Nebelwerfers.  With much whooshing and banging they came in and managed to catch the infantry and Churchills.  Despite the large number of hits, Gus managed to save almost everything.  He's getting some damn good dice lately.

To return the favour, Gus called in his own artillery, receiving a barrage of 8" shells in return.  These deviated a bit from the intended target (the 88), but did manage to rout both the Pak 40 gun crew and the German HQ.  A bad turn for the Germans to be sure.

As the big guns blazed away, the initial British force was reinforced with the arrival of some Shermans and more infantry.

Another artillery call by Gus brought in some even bigger guns, some US 240mm howitzers this time.  Again they managed to miss the 88, but they did some serious damage to the supporting German infantry and Stugs.  Somehow the Stug commander was destroyed by this barrage, further hindering the German command ability. 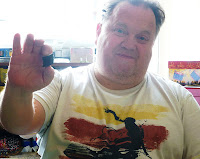 By this point things had definitely swung in favour of the Brtish, as can be seen by comparing Nathans morale counter pile with Gus' in the next photo.

See, hardly anything there!

The British kept advancing and pushed back the German defenders.

Somehow Gus failed to notice the 20mm Flak gun hiding in the corner, until he drove up to the hedge and the gun opened fire.  Although a Shermans armour is not exactly thick, it was too thick for the 20mm gun, whose shots all bounced off.  The Sherman then crossed the hedge and crushed the Flak gun.

In a valiant, but ultimately failed, attempt to slow down the advance, Nathan sent sped forward with a recon unit in a Kubelwagen.  After shooting down the road at breakneck speed, the driver slammed on the brakes and the soldiers jumped out, readying their Panzerfaust.  The Churchills promptly opened fire withtheir mgs and pinned them, before doing the same again and routing them.

Desperate now to cause some damage to the British, Nathan pushed his remaining 2 Stugs forward, but it was too little way too late.

Even though the 88 managed to exact revenge for the crushing of the 20mm Flak gun, the Germans morale was now teetering.


A final volley of fire killed off the German HMG and infantry on the right flank, the resulting morale chits were enough to see the Germans break and run.  Losses were heavy for the Germans, but only moderate for the Allies.

It was a fun game to watch, the amazing number of 6's that Gus rolled for infantry saves had to be seen to be believed.  Battlegroup rules are pretty good and I will hopefully be playing them soon.

More later folks, as we are all off to watch World War Z tonight.  Keep rolling those dice.