It's come and gone. Another year, another load of money dropped and things bought that were not on the shopping list. The trip up was good right up too the point where the Underground was used. Closures, bad information and staff who sent us the wrong way. Lovely.

Once we got there it was good though. The show seemed quieter than previous years, but that may have just been due to the crowds rushing in next door to sign up for the marathon. It did improve the view in many ways though. Lots of games that were very pretty, lots of traders and too much choice! I never have enough money for this show, but I think that no matter what I took it wouldn't be enough.

Met a friend from the internet for the first time, so hello to Steve and Neil. It was nice to meet you and I hope to do so again. Nice models too, Area 9 is Neil's company and the buildings look very good indeed.

I picked up the building ends and roof from Outpost Wargames, and some Assault Guards from Empress Miniatures for the ongoing Very British Civil War force. They will look good as some form of uniformed group, such as train crews or a ships landing party. Hurrah for the King and Torquay.

I also spent some money on a couple of boxes of Immortal Miniatures plastic Hoplites. This is my favourite period of history so I may have to move them into the painting queue pretty damn quick. They look better in the plastic than they do in the pictures, so expect more to be bought pretty soon.

I also got some excellent dice, with less than polite exclamations on the 1's! Silly I know, but what the heck.

Right, I'm off now to sort out more work. Catch you next time.
Posted by jcralls at 09:06 No comments:

I have finished the 8 gun 25pdr Battery, a Stug Company and a Panzergrenadier Platoon this week. 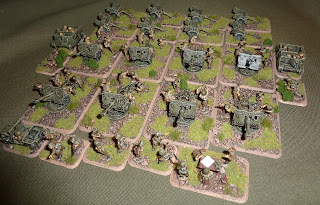 Here's the guns, enough to upset any German commanders day. The battery also includes 1 medium and 3 small command stands, 2 OP stands, 2 OP Carriers and 1 Jeep. I have based the limbers separately from the guns as it seemed too crowded with it on the gun base. 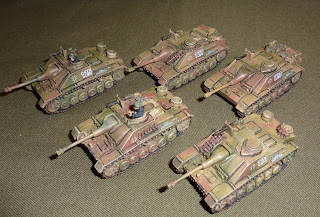 
And finally some armoured support for the Panzergrenadiers. 5 Stug IIIG's, all ready to open fire on some poor Sherman/T-34.

All the vehicles were the first tries with an airbrush and I think they came out pretty well. Off to paint some more Napoleonics now, the joy of this is exceeded only by my indifference to painting Napoleonics.
Posted by jcralls at 12:24 No comments: