Since I posted on here, but I'm back!

I am still struggling on with painting 15mm Napoleonics for my brother-n-law! To say that they are not my favourite thing to paint would be an understatement.

The current flavour of the month amongst the group I game with is the Very British Civil War. I have had a bit force for this for some time, but will hopefully get the rest painted now the planning for a campaign is underway. I am in charge of the Royalist faction, led by the Earl of Devon and controlling Torquay. Our opposition includes Facists(Totnes), Communists(Teignmouth), Anglican(Newton Abbot), Devonians(Paignton) and the Navy(Dartmouth).

Here are the few units I have painted.

First up is a unit of "Regulars", representing the local yeomanry who have stayed loyal to the King. These are WW1 British from Musketeer Miniatures.

This is the first Militia unit, from the Musketeer "Irish War of Independance" range.

The second Militia unit looks a lot like the first, but has a different Lewis team. Same source as the others.

Milord, his Chaffeur and some shotgun armed militia make up the last of the painted foot. All but Milord are from Musketeer, while himself is courtesy of Steve. 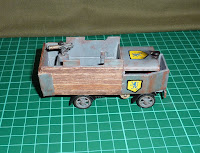 The last painted unit(sort of) is "Stinky" the steam-truck-tank. A badly converted model-of-yesteryear steam truck, with metal plating around the cab and railway sleepers protecting the flat bed area. The usual weapon carried is a Vickers MG, but recently a 37mm ships gun has also been sighted on the pedestal. Don't you just love magnets!

So that is the painted force so far. Still to be painted are (all Musketeer unless it says otherwise) a unit of Highlanders(veteran bodyguards), another unit of regulars, a unit of boatcrew/railroad crew(Empress Miniatures SCW Assault Guards), a unit of Irish settlers, another unit of Militia, a regular Vickers HMG, a Command Section and an 18pdr field gun(Renegade Miniatures). I also have a 1/48 Hawker Fury biplane to provide air cover.