For the last few weeks/moths I have been running the "29 Let's Go" Chain of Command pint sized campaign for some of the Devon Wargames players. Primarily this was to show them the way the game is played at its best, one platoon against one platoon.
As I have said previously, the best place to see the battle details is JJ's blog. He has taken many pictures and put up a few reports already. I am now putting up the final result and the details of casualties etc.

In the campaign the Germans get a single platoon for the majority of the actions while the Americans get a new platoon for each game. This gives a big advantage to the American player as they get three squads of twelve men for every game while the German has to husband his resources and try to minimise losses while still stopping the advancing enemy.

The campaign is fought on 5 maps in a ladder sequence. It is possible for the Americans to win in 5 games, put unlikely if the German player is sneaky careful. As it was, this run of the campaign took 9 games as Ian managed to pull a few sneaky wins and one completely flukey one. 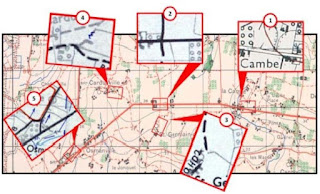 Above is the map of the battlefields as they appear on the ground. Maps 1, 2 and 5 are defended by a single platoon of Germans. Luckily maps 2 and 3 are off the advance route and are held by other platoons, so they just serve to delay the advance.

In the campaign the games went well for the Americans initially. They won game 1 and 2 on maps 1 and 2, then lost game 3 on map 3 and had to refight it in turn 4. Turn 5 on map 4 saw a major back step for the Allies when, despite getting 6 phases on the trot before any Germans were even on the table, they failed to get a chain of command dice and the concentrated German firepower broke their force morale very quickly. The battle was lost for want of a single 5 in 7 phases of play.

That set them back to map 2 on the main road. The original German platoon was well rested by now and called up reinforcements, giving them a full platoon again. They went on to win and consolidated their position. This also caused the American Colonel to waver, requiring a visit for General "Dutch" Cotter to get him moving again. Game 8 and the Germans inflicted a few casualties and then pulled back to maintain their strength. Game 9 was the final round and would decide if it was a major German victory or if the allied advance would continue. As it went on, this final battle was a very cagey affair and it went right down to the wire. Both sides lost many men and force morale fell, reducing chain of command dice until, finally, the Germans broke and the American advance could continue. However, all the Germans except for the defending platoon had escaped and the ongoing fight would be harder for it.

Below is a table detailing the losses after each game. Losses are not all dead, 50% are dead or badly wounded enough that they are counted as dead, 25% are wounded and miss the next game while the final 25% are lightly wounded and are available for the next game.

The different coulours on the German column show the losses for the other platoons. In total German losses were 86 infantry, 2 NCOs and 9 support weapon crew. That works out as 43 dead and 43 wounded. American losses were 103 infantry, 1 Senior NCO, 3 NCOs and 6 Shermans, giving 52 dead GIs with 51 wounded.  All told the losses were fairly equal, except for the 6 Shermans!

It was fun to run the campaign for the lads, especially as  I got to see their tactics and planning change each time they played. I can recommend the pint sized campaigns to any one who like Chain of Command, it makes for a very different game to the usual game as you have to be more careful with your losses.

That's it for now, I am off on the yearly pilgrimage to Partizan tomorrow so expect news of that next week. Catch you all later.

Legionary 2019, To the Strongest game

Yesterday was the local Exeter wargames show Legionary, hosted by the Exmouth Imperials who are as fine a group of folks as you can hope to meet....at least in Exmouth! 😉😁

As we usually do, Nathan(aka Stumpy) and I put on a game. Sadly we couldn't do the game we originally planned so we decided to do a 28mm ancinets game using the "To the Strongest" rule set. These rules use no tape measures and no dice, so Stumpy was at a disadvantage as his usual rubber tape measure would be of no help to him. Sorry mate, I had to get it in, hehehehe.

The game was Romans(nasty invading types) marching into Dacia and being surprised when the locals got all shirty about it and started shouting "What have the Romans ever done for us?"

The forces were 180 points each, just to give some extra scope for an all day game. The Romans had 5 generals, 6 Legion, 4 Auxiliary, 5 skirmish infantry, 2 cavalry and 2 light cavalry units. They were marching along the road and had to react to the Dacians arrival on the flank.

The Dacians had 4 generals, including a Sarmatian and a Bastarnae in command of their own country men. Their troops were 8 units of warriors, including 2 Bastarnae, 2 skirmish infantry, 2 light cavalry and 4 Sarmation lancers.

Below are some pictures of the game as it went on. Things did not go too well for the Romans!


The Romans fought back valiantly after initially getting a right good kicking. At one point they had 3 medals left and the Dacians had 18! At the end the Dacians only had 5 left as the Roman camp fell. The MVU(most valuable unit) was the Sarmatian "Red Lancers", who rolled up four Legion units including both veterans. The best Roman units were two of the Auxilia, who did all the real fighting.

All in all it was a cracking game to watch. After a couple of turns I let my son Christopher take control of the Dacians and Nathan managed the Romans with Andy as a unwilling subordinate. Thanks for playing the game lads.

The show was good again, seems to go from strength to strength each year. See you there next year.

I am still here

Sorry for the lack of posts, I have been a bit down and just couldn't be bothered. However my wife said "Beatings will continue until morale improves" so I am back, hopefully the bruises will start to fade now. 😉

Games have been played since I last posted, but not as many as I would have liked. I have been running a Chain of Command campaign for a couple of the Devon Wargames Group fellas so they can play the game as it is designed, rather than in a multi-player game as the club games tend to be. Best place to see what has been going on is over at JJ's blog as he has been photographing and documenting the games, and the learning curve, that have been played. It's been most enjoyable to watch how the tactics have evolved as the campaign has gone on. Ian, commanding the Germans, has gone from "Get everything on the table" to "Wait, wait, let them come closer" while JJ and Steve have developed from just going for general advances to picking their target, setting a plan and then using all the assets they have to push through. I hope they have enjoyed it as much as I have.

I have also played some cracking ancients games using To The Strongest. I really like these rules and would recommend them to anyone who doesn't mind not having 100% control of things when you game, if you like Too Fat Lardies rules you will probably like these too.  We have also played a couple of games of For King and Parliament from the same author.  Again, these are a lot of fun and have inspired me to go through my lead pile for the Renegade ECW figures I bought a few many years ago. We played the game using some very old 15mm armies borrowed from a friend, but they looked good and the game was very entertaining. Here are a few pictures of the game.

Anyway, that is it for now. I will do another update later about yesterdays Legionary show in Exeter, where Nathan and I put on a game of To the Strongest using Romans and Dacians.

Later folks and thanks for sticking around......if anybody did.
Posted by jcralls at 16:11 No comments: