More painting and a small amount of gaming too

It's been a pretty rough week again, not much sleep and problems with concentration have hindered pretty much everything.

I have managed to slap some more paint on lead this week though.  First up was a squad of 10 VBCW 28mm Militia from Gus' collection.  These were already undercoated and stuck to 2p's, so I just had to paint them.  They will be a welcome addition to my force, giving me enough figures now to complete the 3rd platoon of my Devonshire Royalist Company.  They don't look to bad I think, the figures themselves are lovely.  My favourite is the one I painted up as a cricketer, still in his whites. 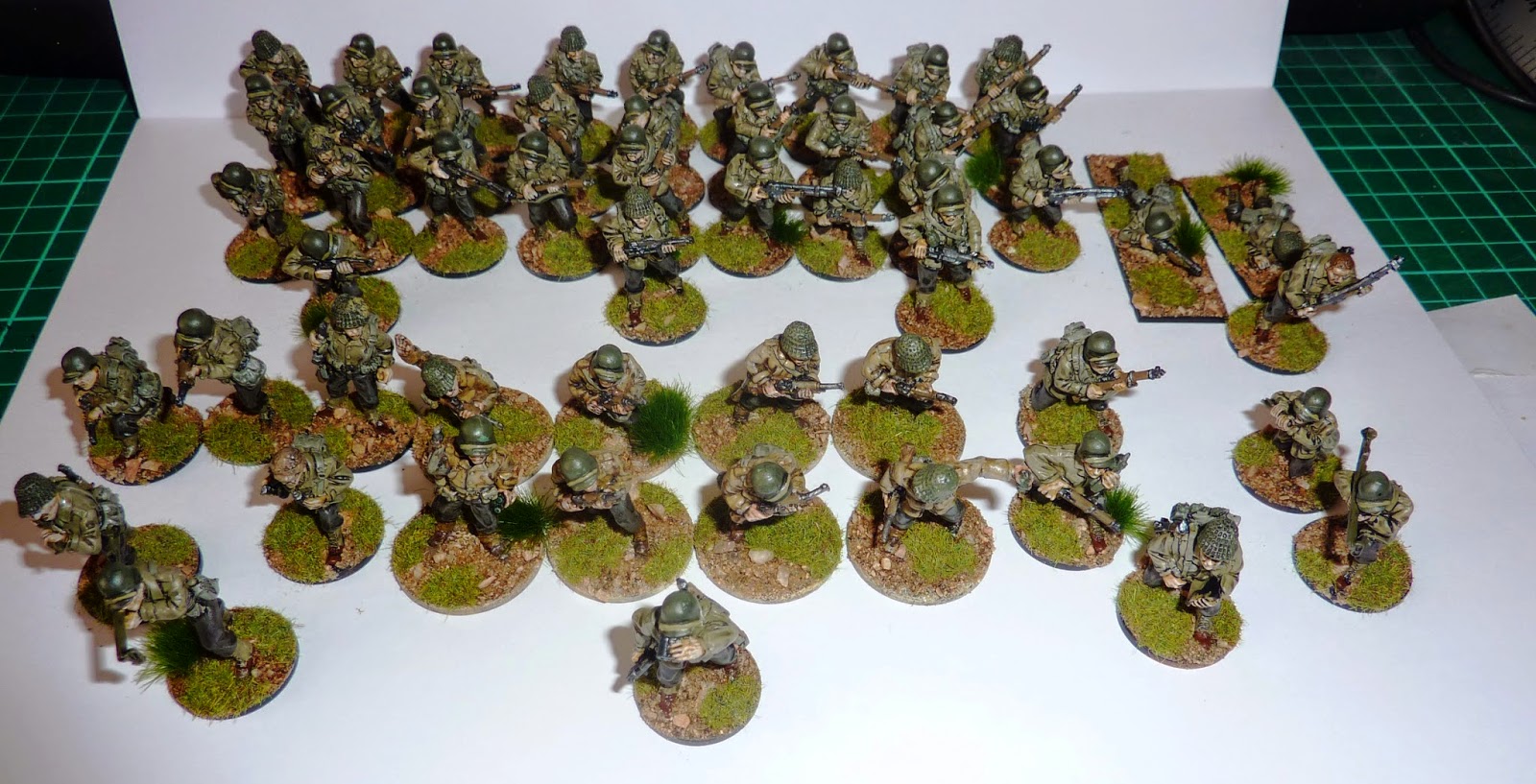 I also painted up the US Chain of Command platoon I bought from Black Tree Design some time ago.  53 figures all told, painted in the earlier khaki/brown uniform instead of the boring green M1943 they wore later.  They also came out pretty well and will be up on eBay later as I game WW2 with 15mm figures due to space and cost. 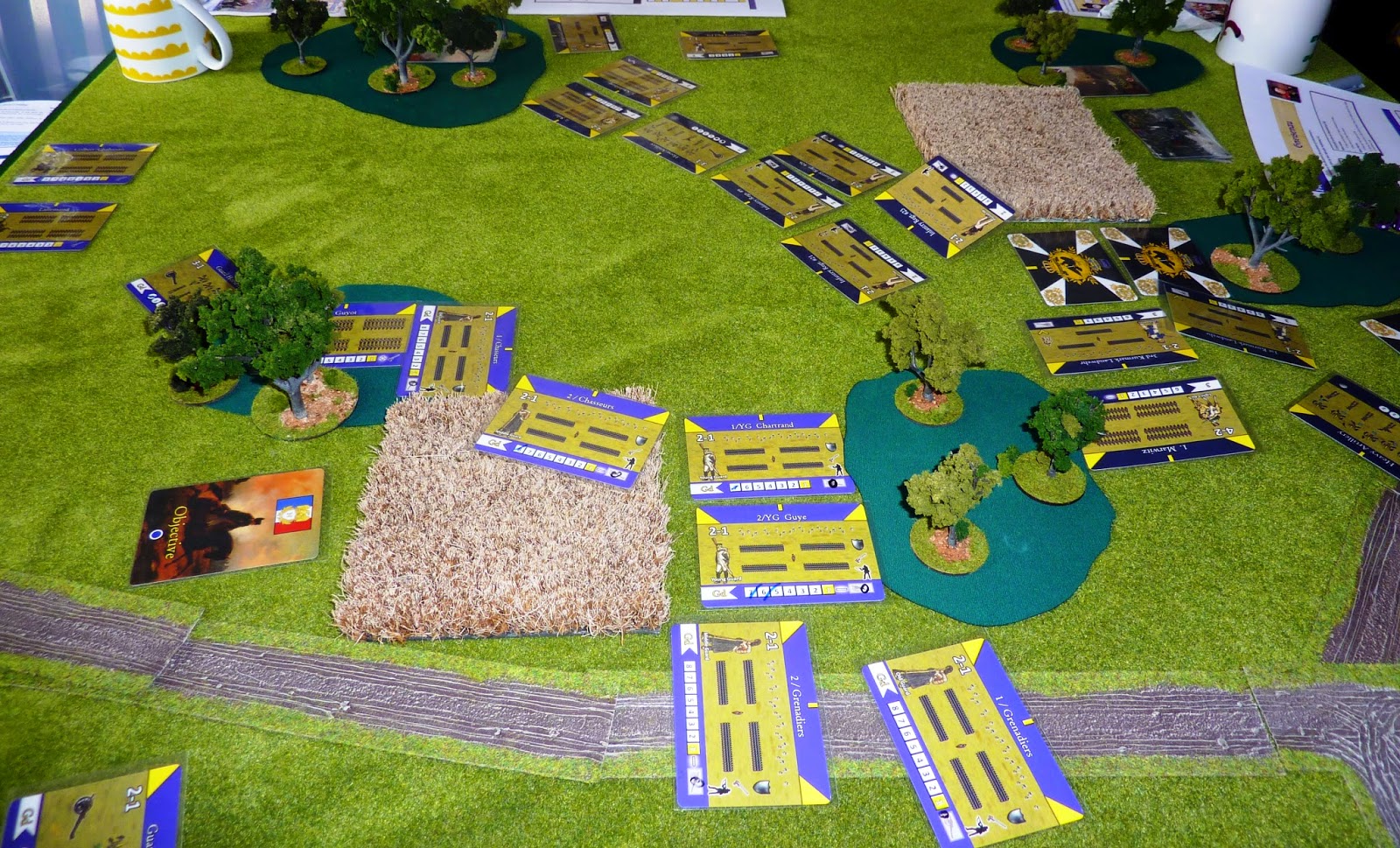 Gaming has been restricted to a game of Blucher against Nathan.  My Prussians were handled roughly by Nathan's French with the end result being a resounding French victory.  My forces were pretty close in number of Brigades to the French, but nowhere near in terms of quality.

My Prussians had 2 units of cavalry, 1 of infantry and a heavy artillery battery destroyed, plus a cavalry and 3 infantry reduced in strength. 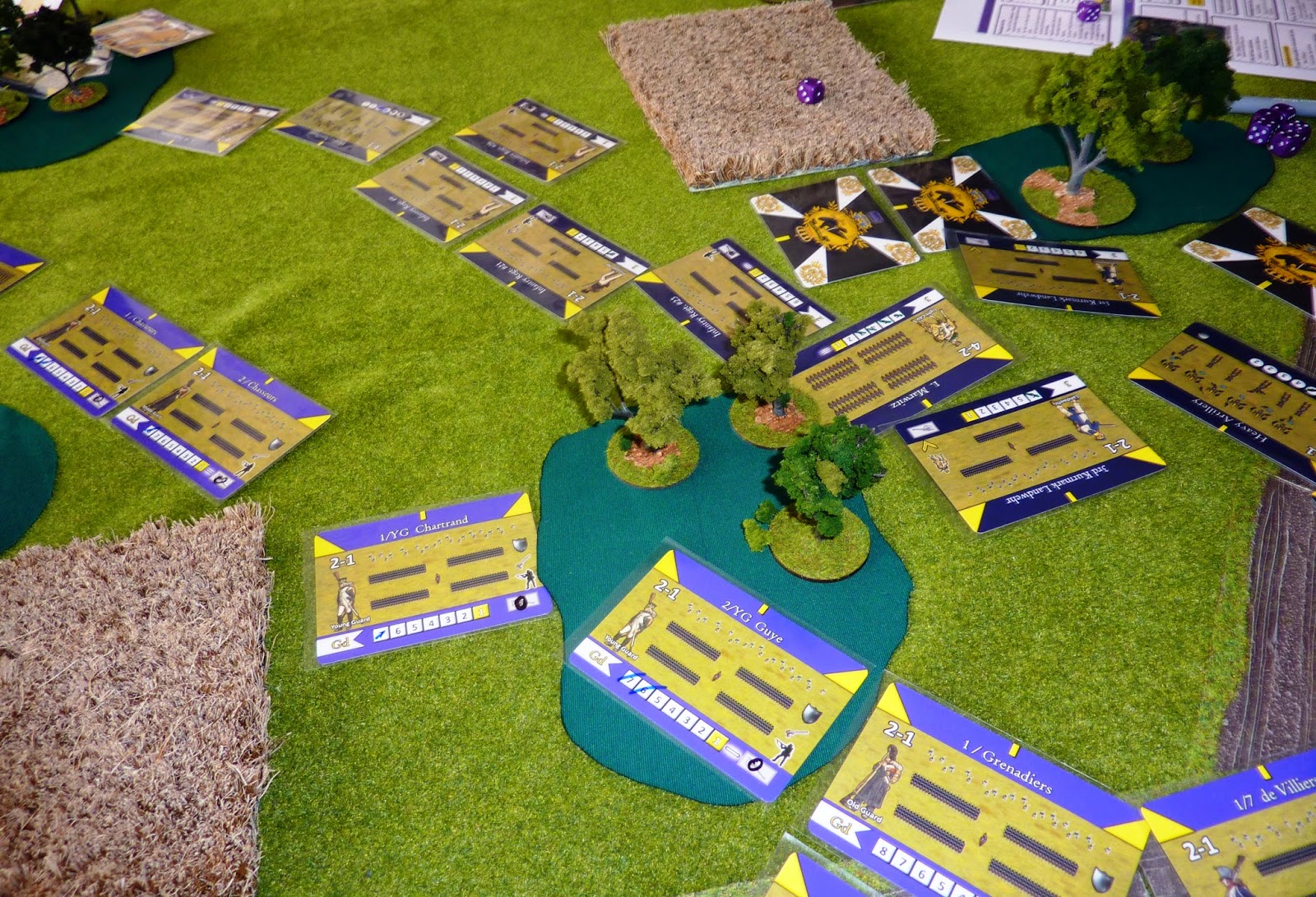 The French had 8 infantry and 1 cavalry reduced in strength, but didn't lose a single unit.  At least I know where the Guard Corps and Napoleon are now.

Off now to watch France vs England.  Don't care who wins now that the Irish have spoilt the Welsh party.  Selfish buggers!

It's that time again, time for me to post a pointless report of my attempts to do anything either productive or entertaining.

Productive.  Hmm, well I have managed to paint up a 28mm WW2 Russian platoon with some support options.  These are now on eBay and will hopefully sell to fund my next purchase. They were quite nice to make and paint, their faces are a lot less "cartoony" than some of the other Warlord plastic figures.  The British espescially always make me think of Captain Hurricane out of the old Valiant comic.

All told there are 46 figures, enough to do a full platoon with several support options for Chain of Command.  HMG, mortar, AT rifle and a sniper team, enough to give a decent game.

Entertainment wise, I have managed a small amount of gaming.  Monday night was spent doing a roleplay Pirate game run by Zob.  We managed not to sink, run aground, get captured by anybody or get anyone killed, which makes a change.  I am also in the process of fighting the Blucher "Hundred Days" campaign with Nathan.
All we have managed so far is the map moves, done over skype and leading to several battles.

June 15th saw the French move up with 4 columns on the right and 6 on the left.  The Prussians held behind the river in the southeast, while more Prussians and the Allied forces pushed down to block the bulk of the French columns.

June 16th dawned and the French pushed ahead, moving in and scouting several Prussian and Allied columns, who returned the favour to the French.  Many forces spent the night camped dangerously close to their enemies and the men could sense that a battle was in the offing.

We were meant to do the first battle, selected by Nathan to be the one in the center, on Saturday at the Devon Wargames meeting.  Sadly I was sick on Friday night and didn't get to sleep until 6am, so couldn't make it.  Sorry Nathan, I would rather have been playing than sleeping all morning mate.

Anyway, that's been the sum of the game related activities this week.  Hopefully things will improve now and I will get in a game of Blucher at some point.  Have fun folks.
Posted by jcralls at 19:02 No comments:

I just love ordering things that turn out to be delivered not delivered by Parcel Farce.  I order things and hope that it's somebody else delivering, be it Yodel, DHL, MyherpesHermes.  Anybody else.  Anybody at all, even if its drunken old Fred who always smells like he's been drinking since 6am.  At least he always delivers on the delivery day, like he's bloody paid to!  Unlike Parcel Farce who don't bother.  Track your parcel online they say, so I did.  It was on the delivery vehicle at 03:46 this morning.  So I waited, and waited.  Then I waited some more because "We deliver until 5.30pm" it says.  Except they don't because they are lying bar-stewards.  At 5.14pm my parcel was returned to the depot!  No attempt at delivery, no call to say "Sorry", no return call after I ring the "Plymouth" number and get put through to someone in Wales who says she will message them and they will call you back!  No bloody contact at all in fact.  About as useful as a chocolate fireguard and as welcome as a turd in a jacuzzi!

So, anybody who sends me stuff, please use somebody else.  Please!

In other news, I done did some painting!  I finally finished the big Shadows of Brimstone monster and some Dead Man's Hand casualties and riderless horses, so here they are.  They have been posted off to Germany now.
So, there you go.  I am now painting some 28mm WW2 Russians, before going back to the 15mm Napoleonics.  Have fun and catch you later.
Posted by jcralls at 21:27 No comments:

Monday night was the first game in the Kampfgruppe von Luck pint-sized campaign using Chain of Command.  Panjo/Pingu had taken the British Para's (in the hope of inspiring some painting) while I got to play as the German's instead of running the campaign.

Here is a brief report, typed up by the campaign master Colin "I'm retiring already" Edgecombe.

Paratroopers from 12 Para had landed during the night and been scattered around the French countryside As dawn broke on the 6th of June on a hill overlooking  Le Bas de Ranville No 1 section took up positions near a crossroads in a wheat field.

The Para HQ section was still missing the Platoon Sergeant and a sniper  team , No2 Section had disappeared completely and the rifle team of No3 section was AWOL.

Soon a German infantry section appeared on the left flank and took up a firing position that covered the crossroads.
Due to the thickness of the hedges and height of the standing corn the Germans could not see any obvious targets so they went on over watch.

This stand off was broken when the Para’s  No 1 section opened fire, with little effect.
The Germans immediately responded with their MG42’s and Mausers , which resulted in two para’s going down.
Another phase of firing from both sides resulted in a rapidly increased level of shock on the German section, countered by the Para No 1 sections NCO going down wounded.  The German senior leader moved up and joined Furst Squad, rallying shock as he arrived.  The Brits used a CoC dice to end the turn and "recovered" their NCO though.
A second German section deployed near the road and added to the fire, which had also increased in reply by the addition of the No3 section Bren team.


Despite causing some casualties the Para’s were being out gunned by sheer weight of numbers, not to mention the 4 MG42's versus 2 Bren guns.

A German Forward Observation Officer controlling some 81mm mortars moved up and started to bring down accurate fire onto the Para positions which were enveloped in smoke and shrapnel.
This was the beginning of the end. The Brits could not move and were pinned and taking casualties.

The German sections moved up under the cover of the mortar fire which then ceased.
The mortars stopped firing, not intentionally mind you, I rolled three 6's and the smoke gradually cleared. Being already shattered and stunned by high explosives the Brits were in disarray, the German squads both laid in machinegun and rifle fire that caused the remaining Para’s to break and run for the shelter of the village of Le Bas de Ranville.

The Paras had 10 casualties including one Junior Leader and four other ranks dead and one wounded sergeant.

The Germans took only 4 casualties and are now in a confident mood to press home their advantage.

The Paratroops confidence has been knocked but they will not give up easily.
To Be Continued.....

All in all a thoroughly enjoyable game, at least for me.  I was blessed with lucky wound dice though, 2 hits quite often resulted in a kill, which only happened on a 6.  Panjo/Pingu was hindered by his lack of men, with only one and a half squads being available.  Looking forward to the next game, but that won't be for a few weeks now.

Catch you later
Posted by jcralls at 00:22 No comments: