I didn't realise how long it had been since I bored you all with the inane and dull crap I get up too.  I'm STILL waiting to hear from the hospital about the operation, I'm still on a mainly soup diet and I'm still feeling like crap.  Apart from that it's all hunky-dory.

Gaming has still been limited, I have managed a few board games and I did get a trip in to the Devon Wargames Group last month, although I didn't last too long.  It was nice to get out for a bit though.  We have played a bit of Zombicide:Black Plague now, having finally got our kickstarter package through.  I also received my copy of Shadowstar Corsairs, which is a fun game and plays nicely.  At least it did the one time we played it, second try tomorrow night.  In fact it's been a good month or so for kickstarters, I have received the two mentioned above, plus some 28mm German trucks from Anyscale Models and some lovely 15mm Cold War British from Armies Army.  It's been like Christmas and birthday all rolled into one. ;)

The 15mm British are beautiful figures and vehicles, I really cannot express how nice they are.  I am planning to start painting them up as soon as I can find my mojo again. 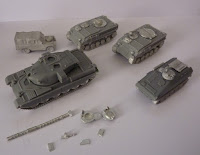 My pledge was for an Infantry Platoon in 4 Fv432s, plus 3 Chieftains, a Spartan, a Landrover and some support weapons.  The vehicles are as nice as any I have had, nicer than Battlefront's latest efforts and easier to assemble as well.  Hopefully that will enough for the level of games I plan to do, but as usual there is bound to be more I end up with.......Scorpions, Scimitars etc

To face off against the Brits I was planning to get some Team Yankee figures and vehicles, but did a quick internet search as £30 for 5 plastic models seems a bit pricey to me.  I found a little gem of a trader in Butlers Printed Models, who do printed vehicles in scales from 6mm to 28mm.  They do a small range of modern Soviet types for £3 or £4 each.  So I plunged in and ordered myself some, 4 BMP-1s for £12 and 4 T-64s for £16, enough for a platoon of each for less than the cost of one box from Battlefront.  Happy days indeed.

This is how they arrived, which at first glance is a bit disconcerting.

From underneath they look even worse.

However the extra bits are very easily removed and it takes only a few minutes to turn them into a much nicer model and I am very pleased with how they look.  They are also surprisingly strong, none of the gun barrels broke or bent, which is more than I can say for a lot of other 15mm vehicles I have had over the years.  There is also a lot less glue needed, ie none.  No fingers stuck to little bits of metal with these.  I did use a file to clean up some of the edges though, it took all of about a minute for each vehicle.

As an idea of how they look compared to the Battlefront ones, here some pictures of a T-64 next to a T-55 from the Vietnam range.  The T-64 is longer, wider and lower, which seems to be about right. 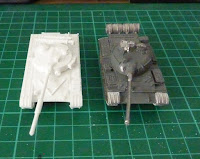 Another pair of vehicles snuck into the order, although not for me.  Nathan and Andy have Winter War Russians on the go and each wanted a T-28 to support them against the nasty Finns.  So here it is in all its glory.  Really nice and a bargain at £20.  The three turrets are all removeable and there is no glue needed again.

Anyway, that's it again for now.  I am off to do something less useful.  Catch you all later.