I have fallen into the 25mm WW2 pit again. After selling all my late war bits a while ago I now find myself with a rapidly expanding Blitzkrieg German force. The platoon I posted last time has now been completed with the addition of a fourth squad, two commanders and some support options.

To start we have the additional squad. German platoons were reorganised from three squads of 13 men to four squads of 10 after the invasion of Poland, so that is what I have painted. Each squad has an MG34 and an NCO(Junior Leader) with an MP40, so there is plenty of firepower available.

The only dedicated support weapon inherent to the platoon was a 5cm Granatwerfer (mortar to you and me), a typically over engineered piece of kit that was of questionable worth. Compared to the British 2" mortar it was heavy(14kg vs 4.8kg), fired a similar weight of shell(0.9kg vs 0.96kg) to a similar range(510m to 460m). The 2" was more useful as it had HE, smoke and illumination shells while the 5cm only ever had HE.

The platoon command is made up of two senior leaders in Chain of Command, an Officer and a Senior NCO. They are joined by a tripod MG34 and its 5 man crew in this picture. Sustained fire MGs are awesome suppression weapons and are a vital addition to any force.

Some heavier firepower is brought by the le.IG 18 7.5cm infantry gun. A small and light weapon, this was used as direct support for the infantry with 6 being assigned to each infantry regiment. This has a 5 man crew and an NCO to command it.

To take out (hopefully) any enemy armour the Pak36 3.7cm anti-tank gun was used. This again has a 5 man crew with NCO in command and is a lovely little gun.


No German platoon is complete without some combat pioneers. These hardy souls were used for all sorts of dangerous tasks and were well trained and equipped. In CoC they come in 3 man "teams", either demolition, wire cutting, mine sweeping or flamethrower equipped. I have painted up enough to make 2 teams in total but with specialists to represent each of the types. Plus an NCO to lead them.

I also painted a deployment point or objective by using the Warlord German High Command pack to represent some senior officers discussing the battle. They are seen here with a forward observer figure to call in mortar or artillery support.

The final addition for the Germans(so far) is a pair of armoured vehicles. A mighty Panzer II and an Sdkfz 222 armoured car. Both are nice kits, the 222 is from Warlord while the cracking Panzer II is from Blitzkrieg Miniatures.

Just to keep it interesting I also bought a few bits of support for the British. From Footsore Miniatures I added a militia Vickers MG and Boys anti-tank rifle team. Cracking figures, these are the first VBCW I have painted for a long time.

Some transport has also been painted, a Humber 4x4 Heavy Car and Bedford OYD 3ton truck. These are from Anyscale Models and paint up quite nicely I think. 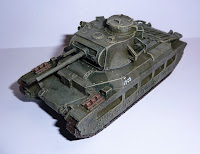 Armoured support comes from the Queen of the Desert, the A12 Matilda Infantry Tank. This is a heavily armoured monster in this period of the war. It's frontal armour was 76mm thick, more than double that of the contemporary German tanks (Panzer II/IV had 30mm) and more than the French "heavy" Char B(60mm). It even stands up quite well later on, the standard M4 Sherman only had 76mm thick armour. However it is slow, really slow. This one is another Blitzkrieg 1/56 model and looks great.

Finally there is the "secret weapon", a mighty Smith Gun! A real emergency weapon, the whole gun turned onto it's side to fire, the turntable and roof being wheels. It looks awesome and makes a nice change from the usual 2pdrs.

So, there it is. Most of these will be on the table today at the Devon Wargames meet. I'm off now to do something even less productive. Take care folks.

Posted by jcralls at 17:57 6 comments: Links to this post