Legionary 2010 and May at the Devon Wargames Group 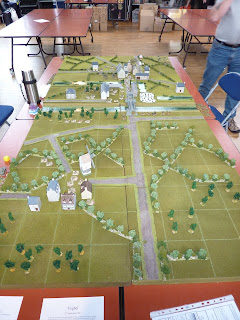 ut scaled up so each unit on the table represented about a battalion. The Allies had seven and a half units plus 6 assorted guns. The Germans had 9 units with a total of 12 tanks or SP guns.

The table looked pretty decent as Gus had spent a small fortune on roads, rivers and hedges from Terra Firma Studios, which look nice. Additional hedges came from Steve, who was drafted in to play the Allies on the south table. The buildings were mostly from Landmark, now sadly out of production.

The game went well, with the Germans eventually driving the Allies back on the north table and surrounding all the defenders to the south. Nathan claimed an Allied victory as the Germans failed to get the bridge, but that was because it was full of dead American para's!

The following Saturday was the May meeting for the Devon Wargames Group, which made it my third Saturday out in a row and is going to cost me with SWMBO! There was a veritable host of games put on this time.

First off was a 20mm Impetus game pitching two forces of chariot riders or sharp stick wavers against each other. Apparently it was all going well for Vince and Chas until Vince went to watch the wendy-round-ball game at Exeter City FC, when Chas threw it all away. Apparently.

Then there was a 15mm Napoleonic game using Rank and File, depicting the far left British flank at Waterloo in a "what if" scenario. Two allied Brigades (7 British infantry, 1 Dutch-Belgian infantry, 4 batteries and 2 British light cavalry units) faced a massive horde of garlic guzzlers. There were 16 French battalions, 2 light cavalry, 2 lancer, 2 Dragoon and 2 Cuirassier units, supported by 8 batteries of artillery. The French infantry units were also bigger than the Allies, so the advantage was decidedly French. Fortunately the sausage munchers were on the way, with 14 battalions of infantry, 2 light cavalry and 4 heavy dragoon units and 8 batteries of artillery. Could the Allies hold until the Prussian's arrived? Hell yes! The French eventually started to drive the Allies back, but not until the Prussians were on the table and starting to roll up the flank.

Guy and Eoghan played a game of the new version of Warhammer Ancient battles. Guy lost as his Gallic horde was speared, stabbed and trampled by Eoghan's Successor force.

The final game was Jacks AWI that he put on for himself and his son as he doesn't yet trust Charlie with other people's figures. Charlie's British army whipped the rebellious colonials back and won the day, at least that's what Charlie said.

Anyway, that's a quick rundown. I have to stay in next Saturday as SWMBO has stuff for me to do. I just wish I could get rid of this sodding toothache and head cold.
Posted by jcralls at 16:48 No comments: