Last one before Christmas

At this time of year it seems to be usual to look back at what has happened over the year, but I'm not going to do that.  It's not been the best year, so I'm drawing a line under it now and looking forward.  In two days it's Christmas, a time for families, happiness and good cheer etc.  More importantly(at least to me!) it's my birthday as well.  The less said about the number of years the better, the scariest thing is that I am the youngest member of the Monday Night Group and I am beyond the age that I considered "Old" when I was a teenager.

Speaking of Christmas, I believe that my Secret Santa arrived this morning.  Postie gave me a box from Germany that was promptly whipped away by my wife and hidden before I could get any more details than that.  So, whoever you are that sent it, thank you in advance.

Ah well, looking forward to things I want to do/start/finish next year.  I have decided that I have enough platoons for Chain of Command now, so that has been put on the back burner of the painting table.  I am still going to get some more for Fighting Season, but not immediately.  I am also planning to get my ever expanding lead mountain/plastic pile reduced, so planned purchases are limited.

Projects I plan to do are
1 - 28mm Crusader period.  I already have some Fireforge figures purchased for this, additional units will be needed but not until I have painted the ones I have here already.
2 - Dragon Rampant.  I am getting the rules for my birthday and aim to recycle some of the Lord of the Rings figures to play it.  Little or no purchases needed for this.
3 - 28mm Fighting Season.  I have a British platoon(Airfix figures) and some unpainted Americans(Empress).  The plan is to get the rest of the American platoon and then look at getting some insurgent types.  Also I have several Airfix vehicles to make up as well.
4 - Kings of War.  I have been put onto this set by an old friend in Plymouth who has started playing them at the Plymouth Wargames club.  I have so far only had one game and that was using historical figures with no magic, but it was an enjoyable game.  I have dug out my old Warhammer figures now and am looking at dusting them off and having a go in the new year.  Again, little in the way of purchases are needed although, as you will see, I have bought a few figures and painted some of my lead mountain for it already.

So, that's the plan.  Shows that I intend to go too are Penarth, PAW, Legionary and Partizan, plus at least two Lardy Games Days.  That's health and finances allowing of course.

So that's the plan.  The last of this years painting has also now been done.  I am planning a major reorganisation of my painting pitroom between Christmas and the New Year, so painting time will be severely limited.  What I have got painted up are 20 of my old GW Dwarves plus 4 new Reaper figures from eBay. 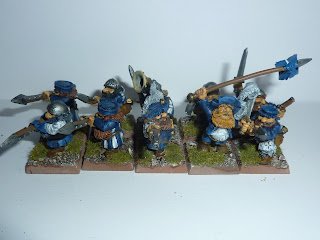 First up are 10 old GW dwarf warriors, 6 with spears.  If I ever see any cheap I will get some more of the spear figures as a unit of them would be useful in Kings of War.  I did used to have over 30 of them many years ago, but when Warhammer was rewritten and Dwarves had no spears anymore I (stupidly) sold them.


Next up are ten more Dwarves, but armed with rifles this time.  Lovely figures, I really enjoyed painting these up. 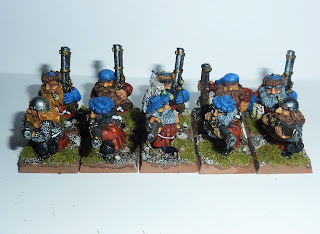 First of the Reaper figures is an Earth Elemental.
This is a big figure, the base he is on is 50mm square and he is wider than it as you can see.  I have painted it up in a style that I saw online, I think the mixed rocks look is nicer than just plain grey or brown.  This is the "new" addition for my old Dwarf army, the Stone Priests can summon elementals to fight for them and they are pretty tough. 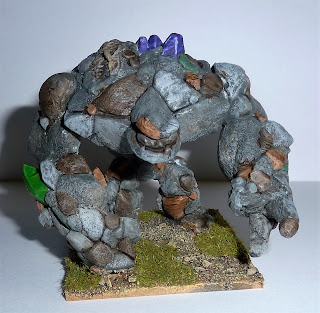 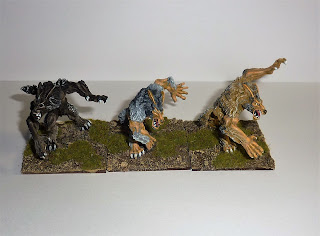 Finally, 3 Reaper werewolves to join my Vampire Counts army.  They will make a change from the usual skeletons and offer a fast moving and hard hitting unit.  I have attempted to paint them up in three different wolf-like colours.  From the left we have a black one, a grey one and a brown one.  I am fairly happy with them, so they will do.

So, there it is.  I am off now so it just remains to wish you all a Merry Christmas and I'll see you after Hangover Boxing Day.  Hope you all have a good one.
Posted by jcralls at 22:14 No comments:

Part 2 and the figures I have painted.  I have struggled to concentrate on anything really so it's been a case of doing whatever took my fancy.

I have had most of these figures for years and have finally slapped some paint onto them.  Back row on the left is the Witch Hunter from Warhammer Quest, the other two are from the Mordheim range I think.  The front two are Bretonnian "Not Little John or Friar Tuck".
This is an Ogre figure that I have had so long he's gone bald.  Nice details on the figure, he has obviously been in his share of fights and not come out unscathed. He will join my Ogre Mercenaries to make them 6 strong.
A Pegasus that I got from somewhere.  It's GW again and should have some sort of rider I think, but if it did he is long gone.   The wings are painted up to look something like those of a red kite, because I like them.
Another "horse" creature, no wings but a big sharp horn instead.  Again, it should have an elf rider but I don't remember ever having him/her.
A figure that needs no introduction to gamers of my age(old!).  Thrud the Barbarian has finally been painted and may well fill in as another Ogre.
An old Blood Bowl Troll that I have repainted.  It was green and really badly painted, it's now blue and hopefully looks better.
Another monster, this time it's the only Minotaur I have with a head.  I have another 8 bodies without heads......
Four old Dwarves, just a small selection of the masses of unpainted Dwarves I have.
Historical stuff finally.  A Roman stone thrower type thing that came from Gus.  No idea what it's called or who makes it, but it's a nice addition to the Roman force I haven't painted yet.
A 1980s Chaos snakeman.  I just liked this figure when it first came out and bought it.  It's only taken me over 30 years to paint it.
A Romano-British leader type.  Can't remember where I got him from or when, but a nice figure and a welcome addition to the warband.  Not a complete paintjob, more of a touch up and refurb. 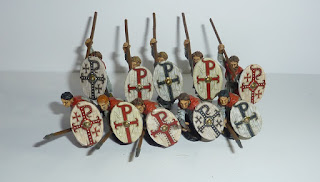 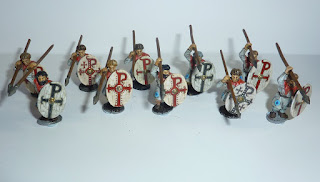 Finally some more Romano-British.  These are Wargames Foundry figures that I have painted up for Nathan.  They have Gripping Beast shields as their originals were misplaced.

All in all I have done alright.  there is another photo that I could put up, but it's for somebody else as a "Secret Santa" present, so pictures will appear after they have received them.

Take care, I'm off now to do something less creative.

Ramblings and a BIG ACW game

I've been a bit lax updating here, so this update includes an eclectic mix.  Gaming has been rather lax of late, primarily because I am still feeling like a zombie half the time.  Sadly the rest of the time I am feeling worse. :(

Anyway, I am staying upbeat as much as I can(although I'm getting fed up waiting for news from the hospital now) and so I have been managing to pop along to the Monday night games.  I don't last too long there, but it's nice to get out for a bit.  Mostly we have been continuing an ongoing Twilight 2000 roleplay that we do for about 4 session each year.  They started this game long before I joined the group (about 20 years ago) and we are still running about trying to get back to NATO lines.  It's a laugh to get back to it though.  Last week we did another game of Blood age as Zob had a meeting to go too.  I left before it finished and was winning at that time so, despite the results once Zob came back and took over for me, I am claiming it as a win. ;)

I was taken out for a day last weekend as Nathan and Panjo took me up to Reveille in Bristol.  A pleasant local show, although the set up is a bit "old school" in lots of small rooms as opposed to the usual "everything in one big hall".  I picked up some tufts(to replace the ones my wife threw away accidentally), some Gripping Beast Dark Ages Warriors and some Perrys light cavalry.  We were only there a couple of hours but it was a pleasant trip and we had a good day.  I bought something else but can't remember what it was right now??????  Comments about age, senility and other such abuse will be ignored!

Yesterday was the Christmas game at the Devon Wargames Groups monthly meeting.  This year Chas had set up an ACW game using Regimental Fire & Fury in 25mm.  The various members pulled their collections together and set too on a large T shaped table.  I only stayed for about 2 hours but saw the masses gather and the game was just heating up as I left.  Over 2000 figures were on the table and each player had a characteristic that had some some of effect on the game.  As an example, Nathan's men hated him and got a bonus if he wasn't attached!  Bit like real life really. I'm sure that JJ is organising a post on there as I type this, so keep an eye out for better pictures and a more detailed report.

Right, that's it for this post.  I will put up another one in a  minute with the painting efforts on it.  Back in a sec.
Posted by jcralls at 12:07 1 comment: