Saturday was the February meeting of the Devon Wargames Group, with Chas putting on a Crusader game and JJ setting up a AWI game.  I joined Chas' game, which was using Deus Vult, and became a vassal lord to King Stumpy the Last. My command was allocated to a flank march on the left, so I didn't come on until turn 2, but that gave me a chance to see how the rules work.
The game involved 8 players, 4 per side, with Crusaders facing off against Turks. Each player had 4 or 5 units, usually a mix of infantry and cavalry.  Nathan commanded the Crusaders, with Steve M, Vince and me as his vassals. Andy lead the Turkish horde with Chas, Steve H and Michael.  The Turks reinforced their left, which left Chas' command outflanked by my flank march.  Thinks went badly for the Turks from then on, despite their best efforts and some good attacks.  It did help that both Chas and Andy managed to roll double 1's on morale rolls and rout their troops.

Thanks to Chas and the rest for a good days gaming.  Deus Valt is different to other sets out there and I enjoyed the game.  It makes a change to only fight in your turn, so it is possible to be charged and butchered without getting to hit back.  This makes positioning and timing of charges crucial, more so than other rulesets do.  The only thing I didn't like was being able to fire into a melee if you could hit the unengaged flank or rear of the enemy unit, but that's just a little bug and didn't change my general enjoyment of the game and rules.  I AM NOT GETTING ANY CRUSADERS THOUGH!!!!

The other game was a 15mm AWI game by JJ, so please check out his blog to get a decent view of the game and scenario.  As usual, his games always look great and play well.  You can go right off some people you know.

Today is the calm before the storm apparently.  It's lovely outside, sun shining and a gentle breeze.  The forecast is less pleasant, with 80mph winds and more rain forecast for tonight. Oh well, I'll have to stay in and do something wargames related. Oh the hardship!  ;-)

I have been gaming a bit more this year, despite feeling pretty rough occasionally.  Monday night has been largely boardgaming lately.  we played another round of Zob's gangster game, with me running the games creator a close 2nd at the end.  The week after we played Firefly, bought by Nathan at Crusade in Welsh Wales.  I really like the game and am looking forward to playing it again, it really catches the flavour of the series and I can't wait to be misbehaving again.

Last week I put on a game of Longstreet fro Panjo and Andy.  As their first game they each had identical forces, 3 units of infantry, one of cavalry and a battery of 3 guns.  Andy, commanding the Union force, chose to attack and went at it hell for leather.  If he could charge, he did charge with everything that could charge.
The Union force lost the fight but, due to his aggressive leadership, Andy came out of it covered in glory and gained lots more troops to continue the fight.  Panjo's Rebs won the fight, but he did so by being all defensive.  He managed to gain a rank, but his reinforcements were far fewer in number than Andys. Andy now has 5 units of foot, 1 small cavalry unit and 3 batteries of artillery (33 foot, 4 cavalry and 7 guns).  Panjo has 3 units of foot, 2 of cavalry and 2 batteries (21 foot, 13 cavalry and 6 guns).  Should make for an interesting game on Monday night.

The other game I played was Chain of Command at PAW 2014.  This was played for Gav of Baker Company to show off his new Winter War range of figures and vehicles.  He provided the terrain and troops, Nathan and I just had to roll dice and have fun. Here are some pictures of the troops and tanks.

The game was played twice, first time with green Russians(Nathan) vs veteran Finns(Me).  It did not go well for the Russians.  They lacked sufficient command dice to make use of their support and were whittled down by the accurate fire of the Finns.
For game 2 we swapped sides and upgraded the Russians to regular.  A more concentrated advance was the plan, staying far away from the HMG bunker on the left flank.  The massed ranks of Russians allowed them to get into hand-to-hand were, despite the Finns superior ability the weight of numbers told and the Finnish sections were wiped out.  The extra command dice also allowed the flamethrower tank to get within 12" and start fricasseeing some of the other Finns.  When we called it a day, the Finns were down to 1 force morale point, but the Russians were nearly out of men.
Nathan also played on the Sunday with Panjo, there are a couple of nice reports on his blog.

All in all it was a good day out and, despite suffering on the Sunday, I thoroughly enjoyed it.  So much so that I am considering getting some early Russians and Finns in 15mm.  I also got a couple of bargains at the show.  Another copy of X-Wing for the princely sum of £10, giving me 7 TIE fighters and 4 X-Wings now.  Then, as the day came to a finish I picked up Officers and Soldiers of the French Imperial Guards Books 1 and 2 by Histoire & Collections.  Cracking little uniform books and only £3 each.

So, there it is.  All in all not a bad few games.  Tomorrow is the Devon Wargames meeting again, so expect more pictures on Monday or Tuesday.  Have fun and keep rolling those dice.

February is here, so is the rain!

Hello again.  It's been a while since I last posted and I can only apologise.  This post is mainly about the feeble amount of painting that I have done in the last 3 weeks. My painting has been seriously affected by the size of Gus' wargames collection.  He had downsized prior to his planned move to Cyprus, but still had a large and varied collection.  He also liked doing multiple periods in multiple scales.  Napoleonics in 6mm, 15mm and 25mm for example.  I am gradually selling it off for his widow though, while I am at it I would like to thank all those who have bought some of it.  It's much appreciated folks.

Anyway, back to painting.  I didn't get much done.  First up were another 8 zombies from the never ending Zombicide horde.  A nice mix this time, including an abomination, a fatty, a couple of runners and 4 walkers.  Only a few more hundred to go!  The orange ones are berserkers, which can't be shot as they are armour plated. 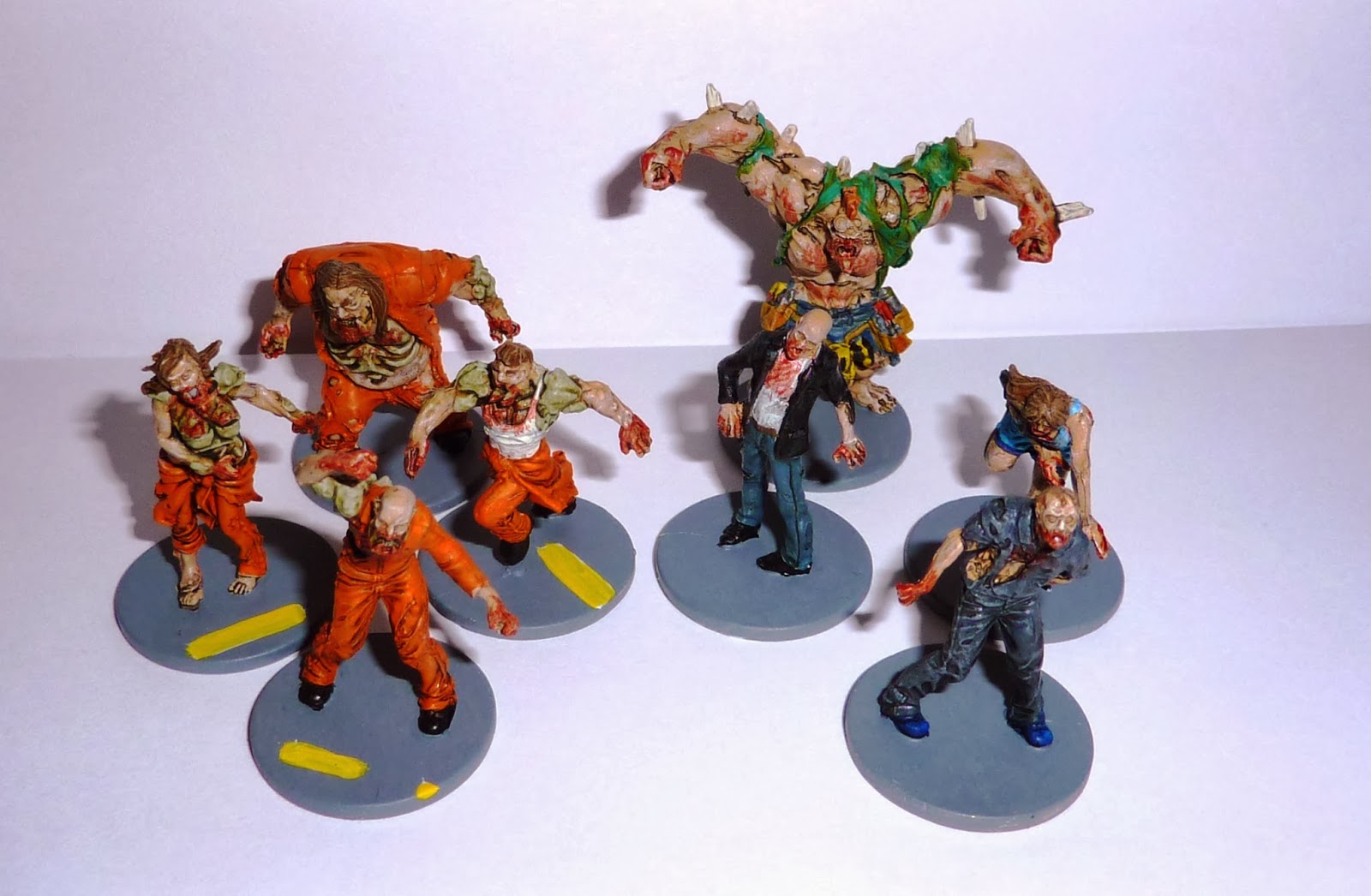 I have also managed to get a bit more 15mm WW2 done for Chain of Command.  Some early war German vehicles this time, to go with the platoon that I have yet to paint.  Some nice, cheap and cheerful Zvezda models provide the armour.  The Stug appears a little big, but it will do.  The other two, a Pz38t and a PzII are cracking models and all mine for less than £3 each.  They are backed up by a pair of Battlefront Kfz15 cars, transport for the infantry that is still in a box. 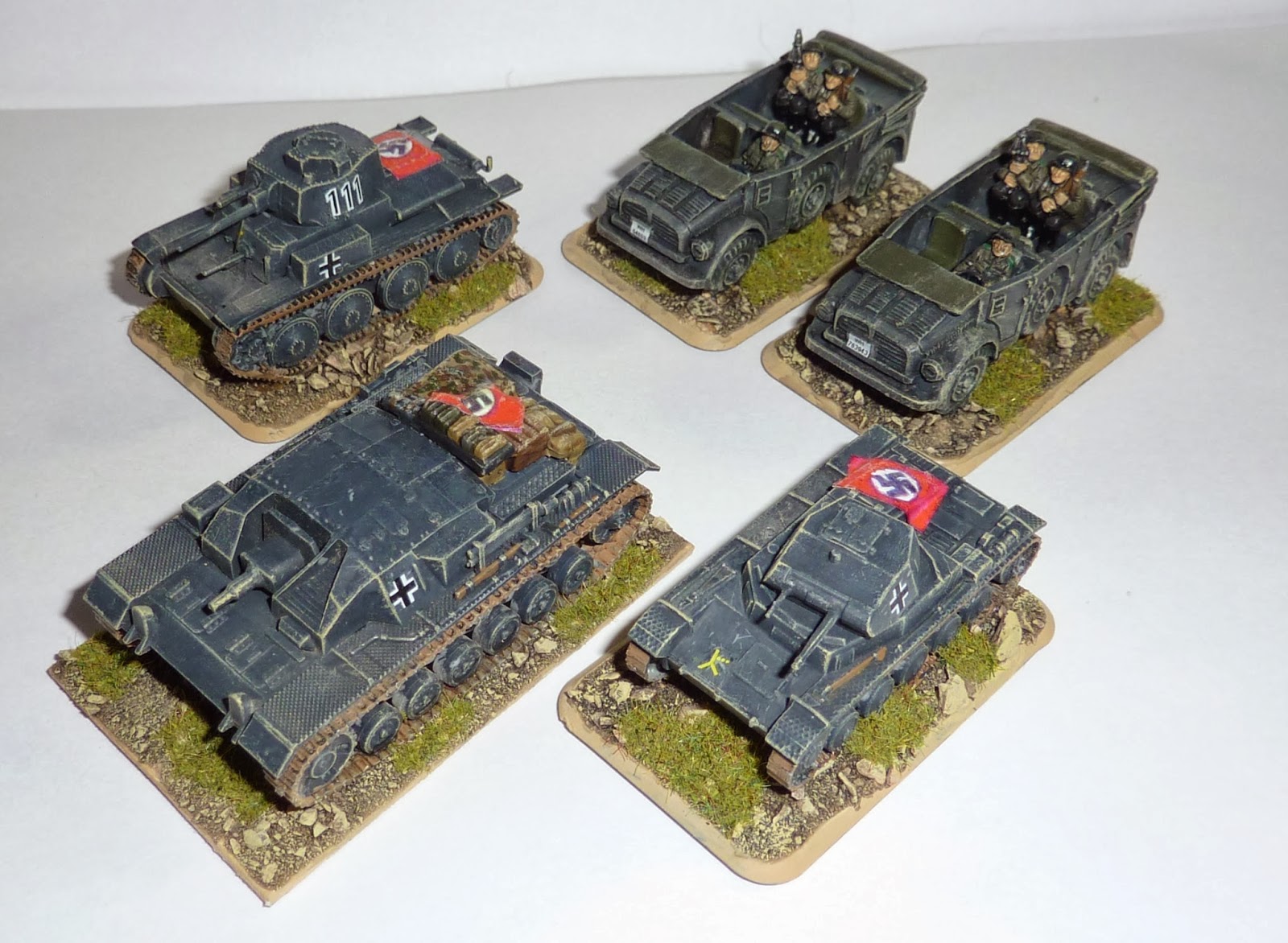 Just to make a change, I rebased some of my old, original Peter Pig ACW figures.  These were the first figures I ever bought at a wargames show, way back when Peter Pig first released their ACW range and I went to the Portsmouth show for the first time.  Still lovely figures, but my painting has certainly changed since then. 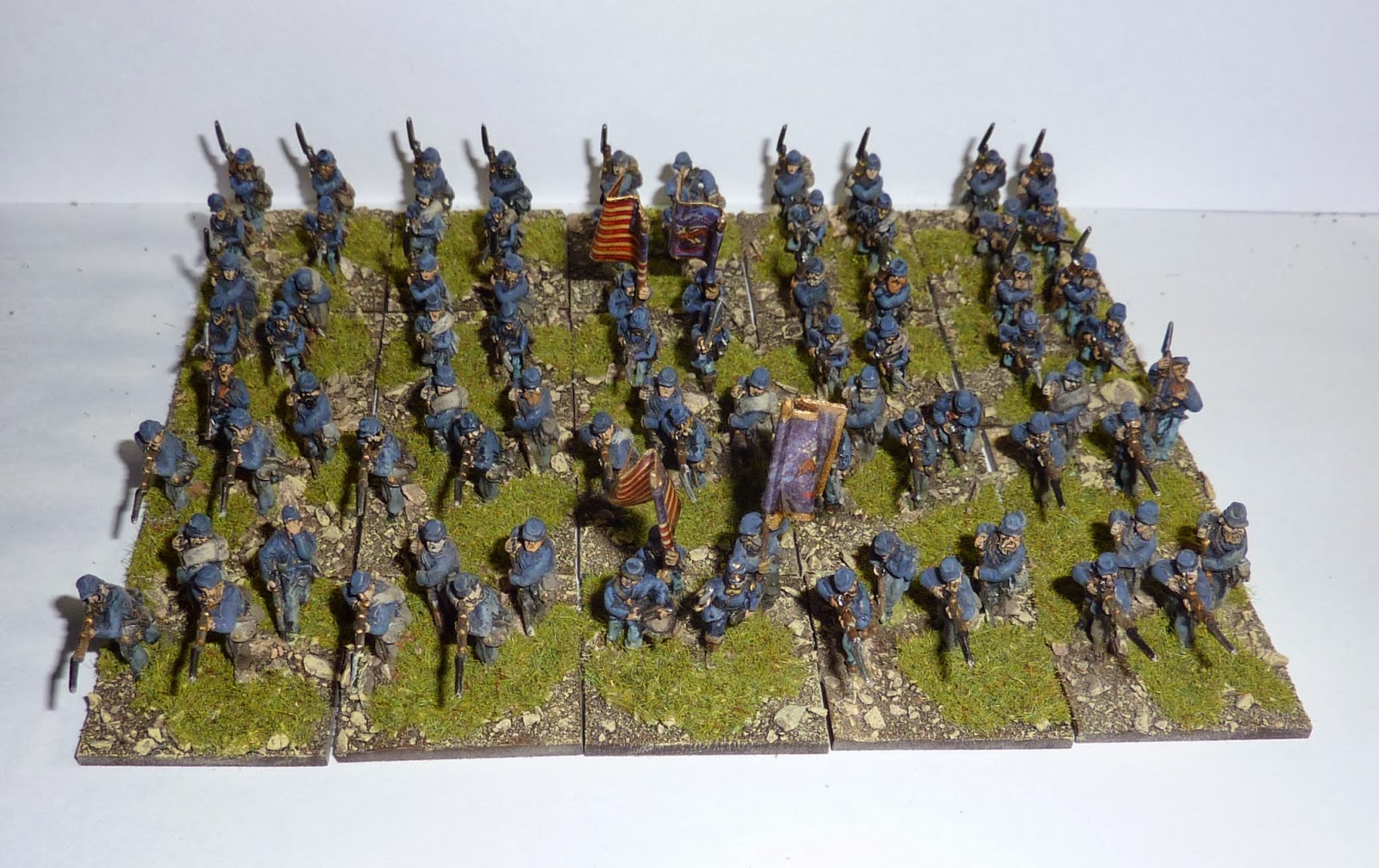 A new unit has also joined the ACW, again from Peter Pig but their current new range this time.  Much brighter painting and a nice addition to the force.  I now have the bulk of a starting Union force for Longstreet, I just need to get some cavalry done to complete it.  Then its on to the Confederates. 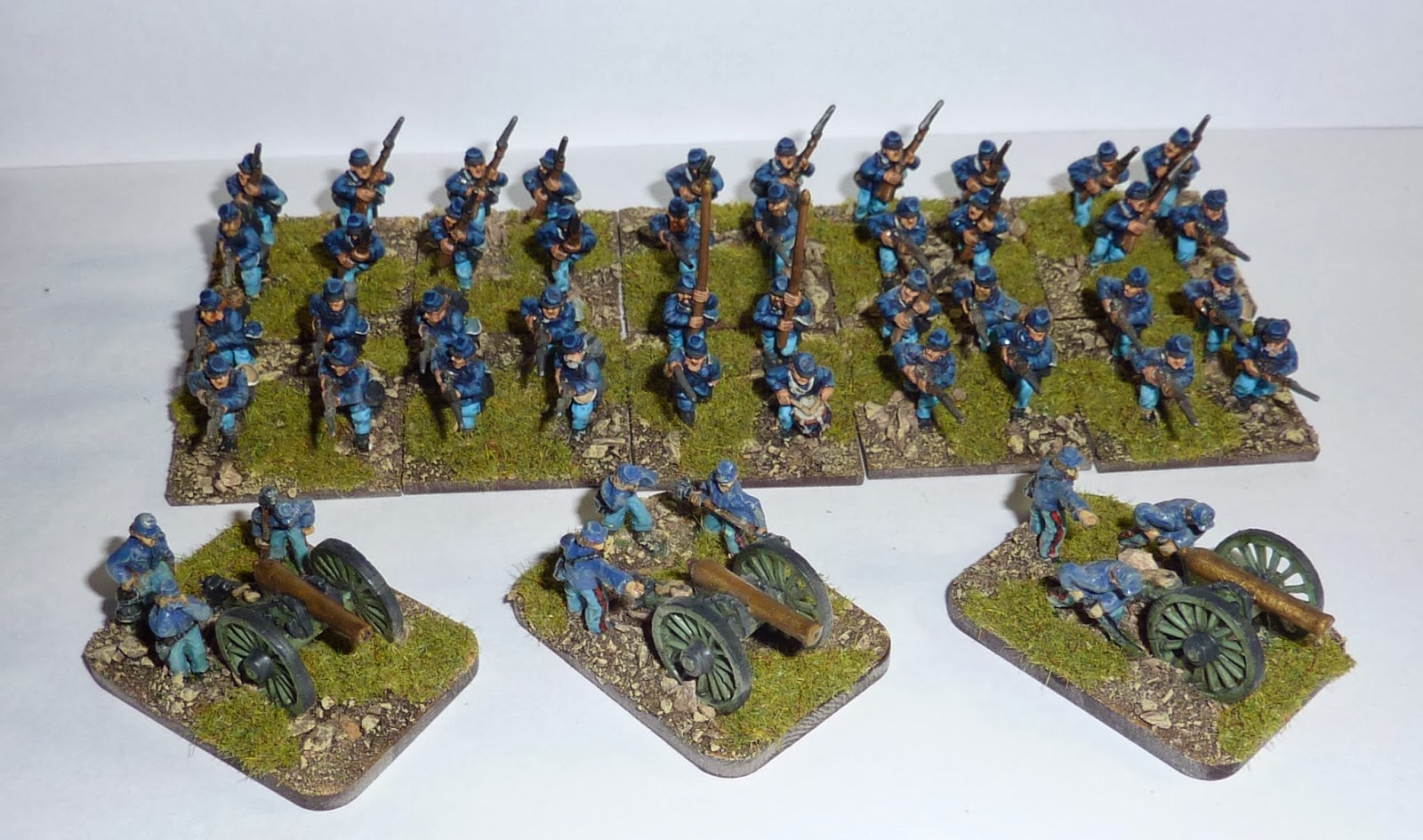 Well, that's it for my painting.  I told you it was a slow month.  This month I aim to do better.  I am just waiting for the bloody rain to stop so I can undercoat some figures.  Its surprisingly warm for February, but its a lot wetter than usual, as can be seen from the floods all over the south-west.  :-(