New Year!  I missed Christmas as we went down to see my mum and sister, but now we are back.  It's been a pretty ropey month health wise, but hopefully things will look up in the New Year! Sadly I missed the December meeting of the Devon Wargames Club, but should be there in January hopefully.

Anyway, I hope you have all had a good Christmas, I know I have.  I ate more than I should have, didn't drink anything I shouldn't and had a good time with the family in damp Cornwall.  Presents were exchanged and I did pretty well overall.  I got the Baby Blitz add-on for Duel in the Dark, the Sons of Anarchy boardgame, two 15mm Tigers, a uniform book on the French Army in 1940, a copy of Soldier, A Visual History of the Fighting Man and a set of Lion Rampant rules.  Plus other stuff that was welcome but nothing to do with wargames. In addition to that lot I also received a secret Santa present from parts unknown.  A trio of 15mm Pz35t's have joined my Early War German's and very nice they are too.  Thank you to however was my Santa, they are much appreciated. 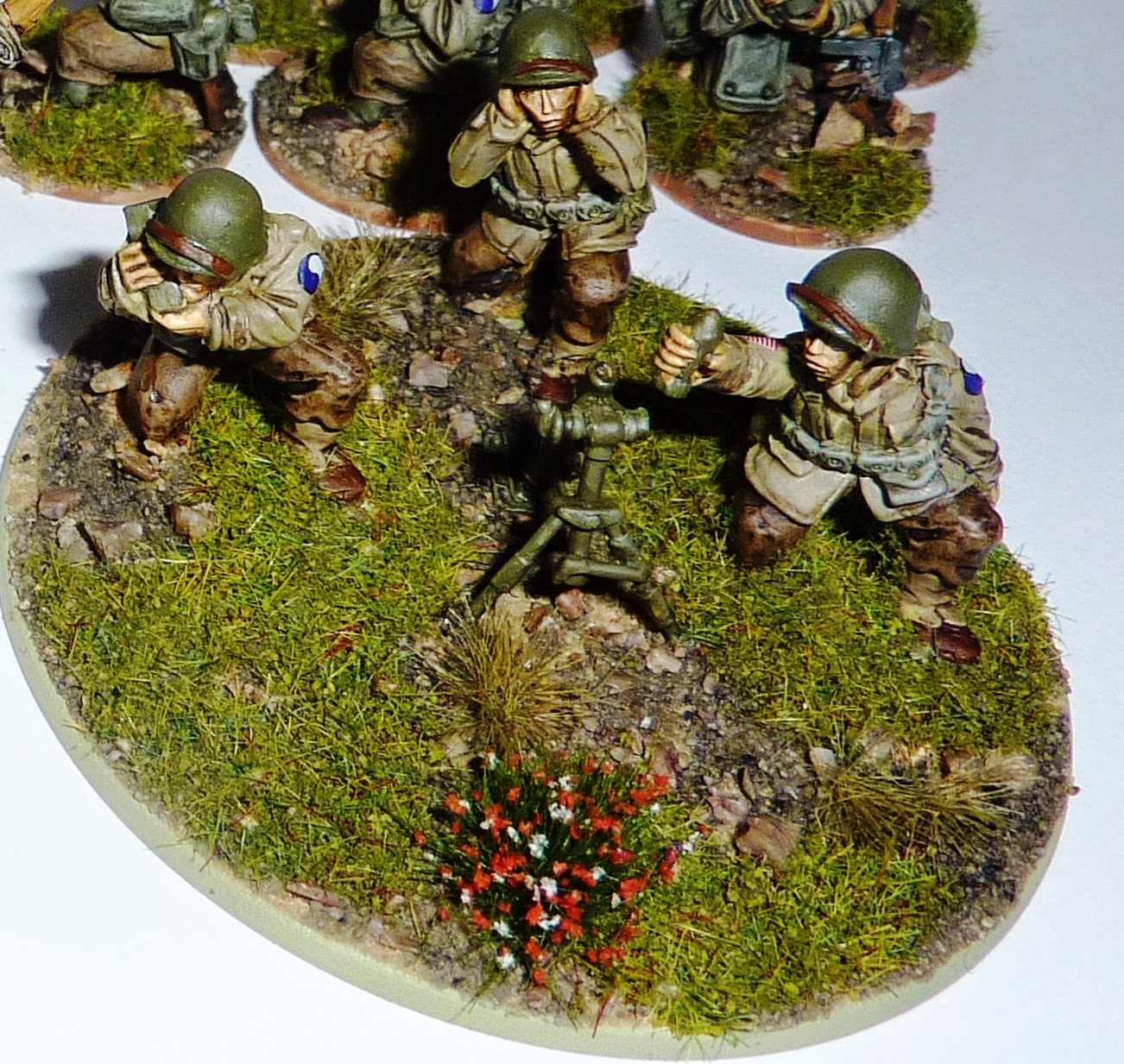 The Secret Santa I sent to a chap in America was a US 60mm mortar with 3 crew by Bolt Action, pre Warlord.  Hopefully you/he liked it.


I did make it to the annual "All Day Bash" of the Chuckadice group, which had a 100% turn out for once.  We played a Big CoC game for the day, with the German's attempting to break through the Russians on their way to Moscow.  This was followed by a quick and fairly bloodless game of Zombicide.  Details of the CoC game will be in my next post as it was fairly busy and I took a few pictures.

Painting for December was very limited.  I did manage a few things though, so here are a few pictures.

First up is a 15mm Seven Years War unit, painted for my mate Gus' widow as he never got the chance to paint them.  No idea of the unit, I used Gus' painting guide and the flags were with them in the box.

Then there is a few additions to my BEF 1940 force for Chain of Command.  A 2pdr with 5 crew, 3 Bren carriers and a jump off point.  The 2pdr and figures are all Peter Pig while the carriers are Battlefront.  Can you spot the sneaky blighter in this photo? 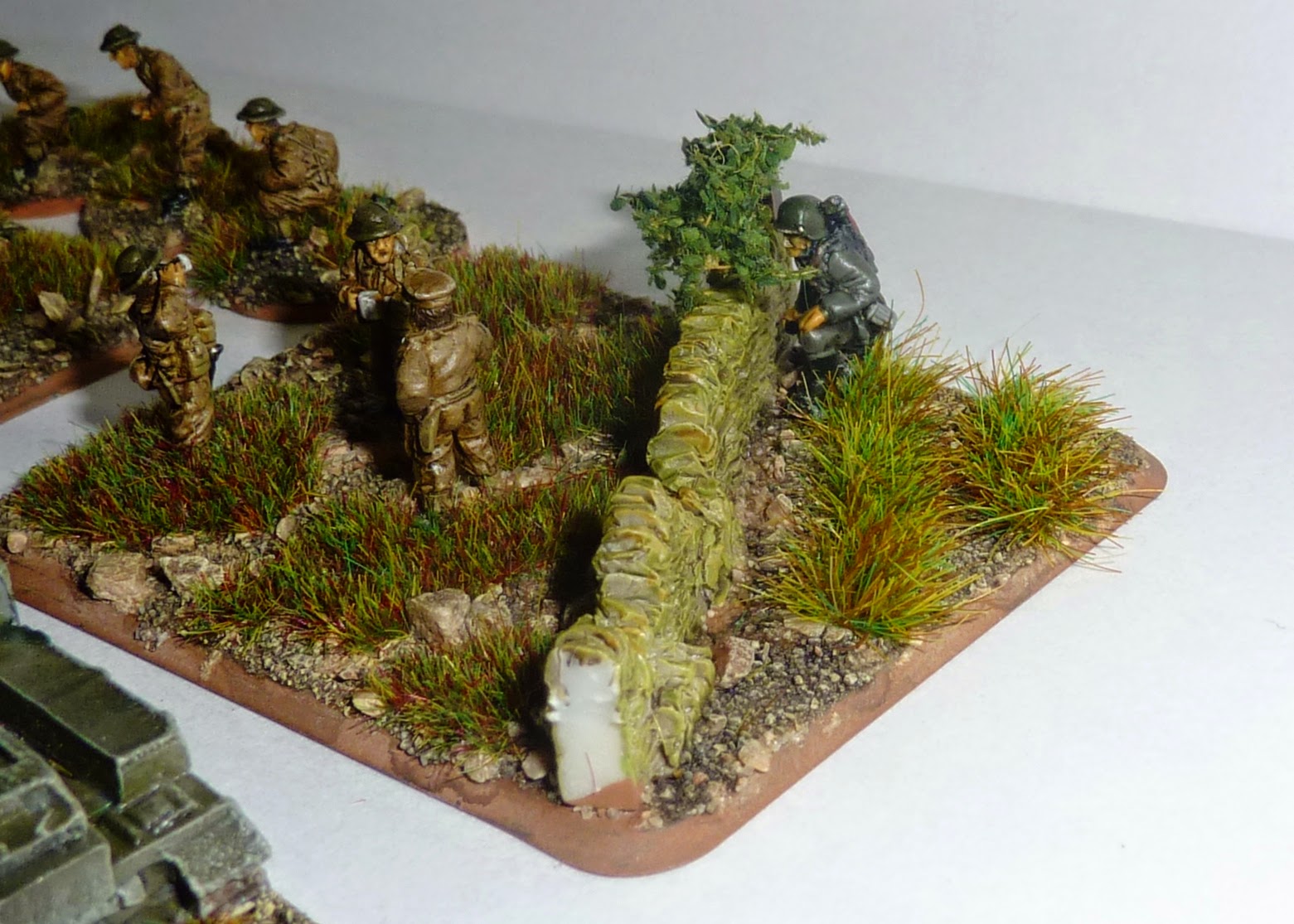 There he is!  Damned sneaky Hun type listening in to the British chat as they have a cuppa.  The idea is based on the "Loose lips sink ships" slogan from WW2.


I also painted up 14 cowboys for Dead Man's hand, but posted them off to Germany without taking a photo.  D'oh!

Anyway, that's it for now.  Have a good New Year and I will post a batrep of the CoC game tomorrow.

Unterfeldwebel Dieter Muehlen stared back at the smoke laden village of La Cambe with a mixture of anger and depression.  An aging former office manager, his receding belly still stretched his uniform trousers to their limit.  Losses and shortages had left him in command of a platoon of Wehrmachts finest with orders to delay the American advance.  His troops were limited and support was almost non-existant, but he had managed to hold for three days before being forced to fall back. 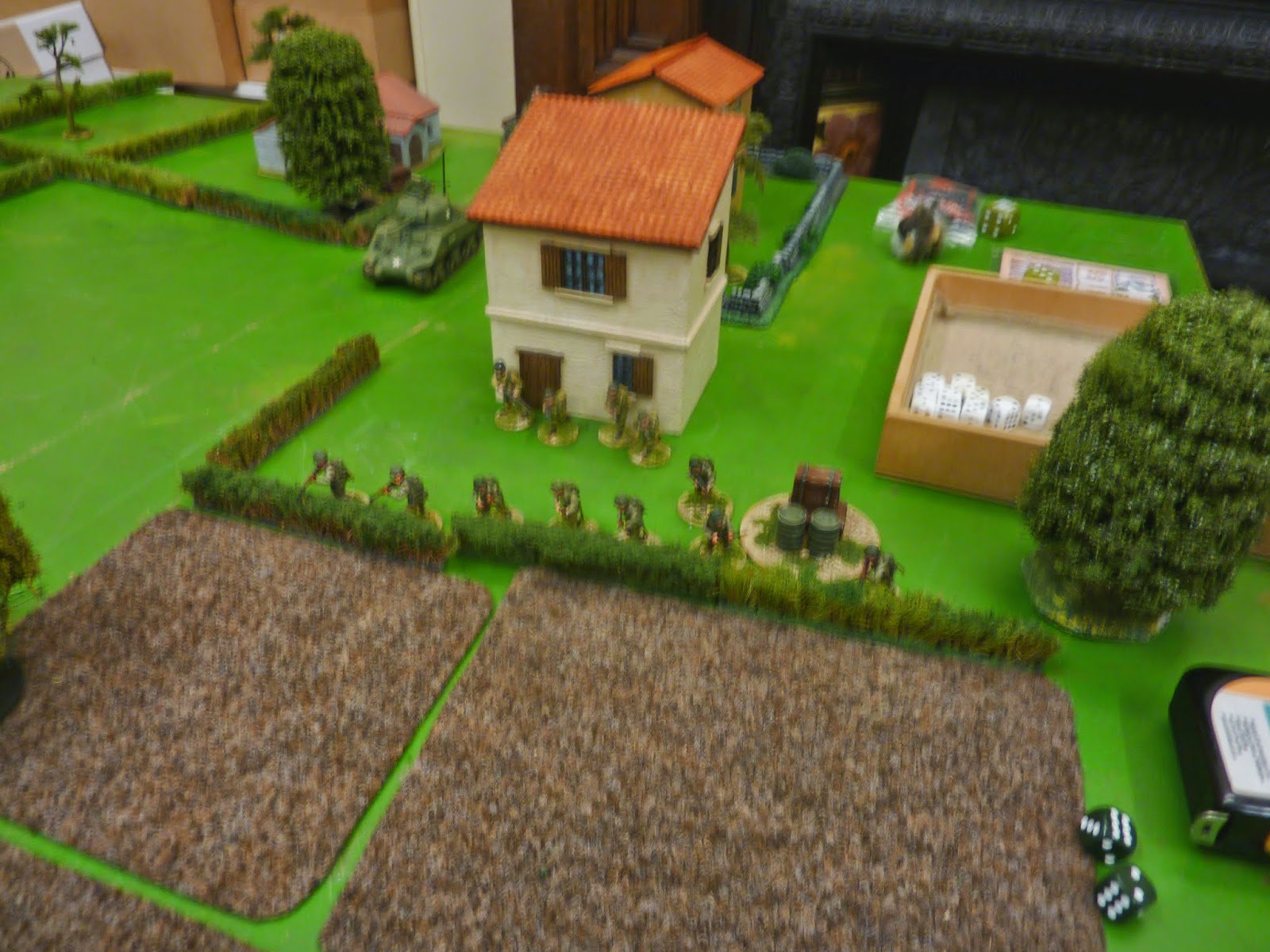 Day one had started poorly, with an enemy barrage coming in accurately and pinning two thirds of his platoon under its fire.  As he sheltered from the explosions and shrapnel, he heard a few screams as some of his men were hit.  Suddenly the barrage lifted and, as he rallied his troops a man shouted that Squad Twos NCO was down.  Damn und blast it, that was Rainer Matthess, who worked for him in the office before the war.  He hoped it wasn't bad as Rainer was a damn good squad leader.  A shout from the attached mortar observer brought his attention back to the enemy and, as the smoke cleared, two Ami panzers could be seen approaching.  A glance told him Eric was ready with the panzerschreck, but he wouldn't fire yet would he?  They were still far off and shrouded by smoke.  A hollow whoosh sounded and Dieter swore as he watched the rocket exhaust.  "Too early" he swore, then ducked as there was an almighty explosion.  Somehow that young fool had managed to hit the panzer and blow it apart. He was either damned lucky or damned good, hopefully the latter.

Then a shout came from the observer and mortar shells began to rain down on the barely visible Ami soldiers as they ducked into some buildings.  As he watched he could only imagine the devastation being caused and hoped it would be enough to stop the enemy advance.  Then he heard the MG42 on his right flank open up.  He couldn't see what they were firing at, but he could see their rounds hitting a house.  Suddenly there was a shout and he could see the Amis pulling back.  Was that it?  Was that the enemy attack stopped?  As the Amis pulled back, Dieter went around his positions and sorted out getting the wounded carried back and the dead buried.  Three men in squad two were dead or severely wounded , plus Rainer and another were wounded badly enough to need a days attention at the aid post.  They had got off lightly.  After reporting in to HQ and organising a resupply, Dieter settled down for the night. 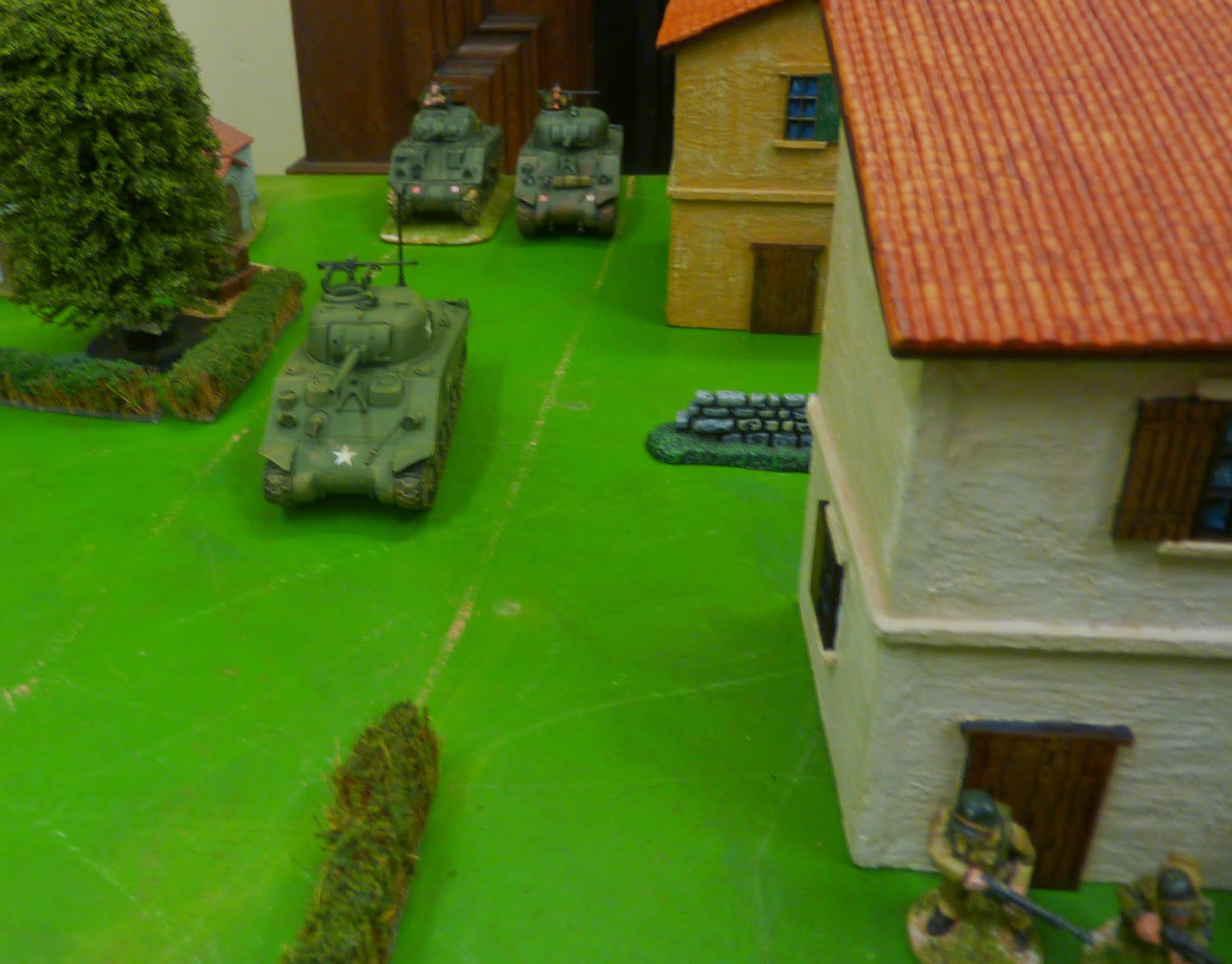 The next morning dawned clear and fresh and he was glad to have woken early as the sound of tank tracks heralded the approach of the Ami invaders again.  Ahead he could see the shapes of three panzers this time, with infantry on either flank.  Damn it all, where was Eric with that bloody panzerschreck?  There was a roar of engines and all three panzers suddenly shot forward towards him.  He could identify them now as Shermans.  A massive crack, followed by an explosion saw one of the Shermans explode spectacularly.  It seemed the 88's of Flak-Sturm Regt One were still operational.  Then he saw Eric suddenly appear in the hedge and fire his Panzerschreck.  Another bang and another Sherman was destroyed.  Two shots, two kills, what a start to the day.  Again the Amis stopped and pulled back, the lose of two tanks obviously shaking their morale.  A quick report in to HQ and Dieter waited.  No further attacks came and he was glad to relax, with squad two being cheered by the return of Rainer.

Dawn of day three had been the worst by far, as the Amis mortar pounded away and the assault force this time included four Shermans.  Oh what he would have given for a PaK 40.  All he had was a few Panzerfausts and a single Panzerschreck.  Fire was soon being traded with Americans in the buildings.  Their numbers were greater, but their firepower was matched by his MG42s.  Three of the Shermans shot forward, spraying HE and machine gun fire as they came.  The 88 fired again, but could only damage one.  Then Eric had a shot, damaging another before Obergefreiter Gapp of Squad One fired his Panzerfaust.  With a mighty bang the lead Sherman was hit and came to a halt.  As the smoke cleared Dieter could see the Sherman sat still.  Surely they were all dead?  Then the turret swung around and fired into the dugout that Eric was in.  As the explosion cleared, Eric and his loader were nowhere to be seen.  The other Shermans also started shooting everything they could see, with heavy and sustained machine gun and high explosive fire causing heavy losses to the German squads.  As the fire continued the American infantry surged forward, urged on by the voices of their Lieutenant and Sergeant at the back.  then the mortars hit again, unerringly accurate and devastating.  This was enough for Dieter and he signaled a withdrawal.  He had held for three days, destroying three Shermans, damaging three more and killing an unknown number of enemy infantry.  Now it was time to regroup and occupy the next village........if he had enough men left. 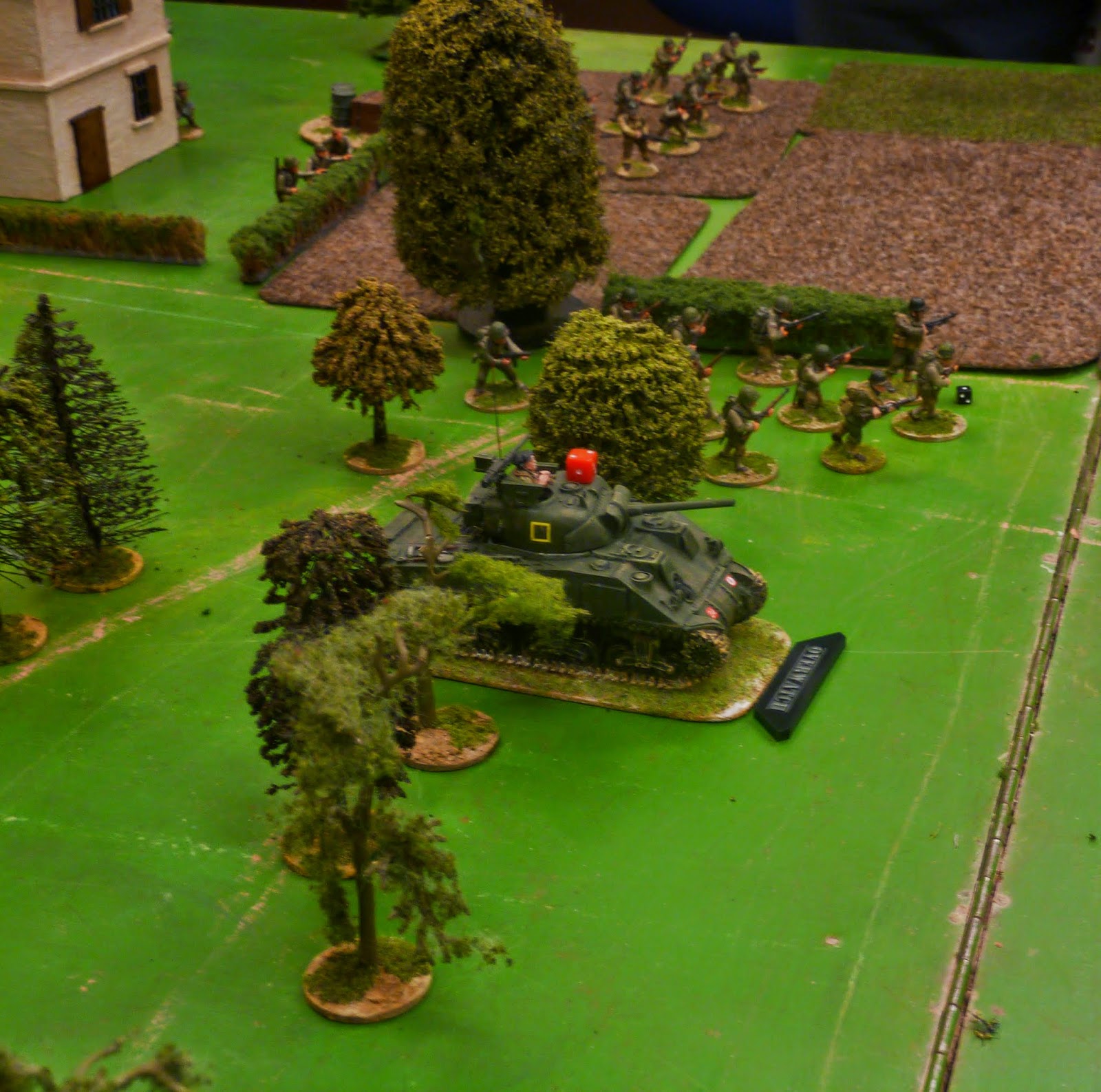 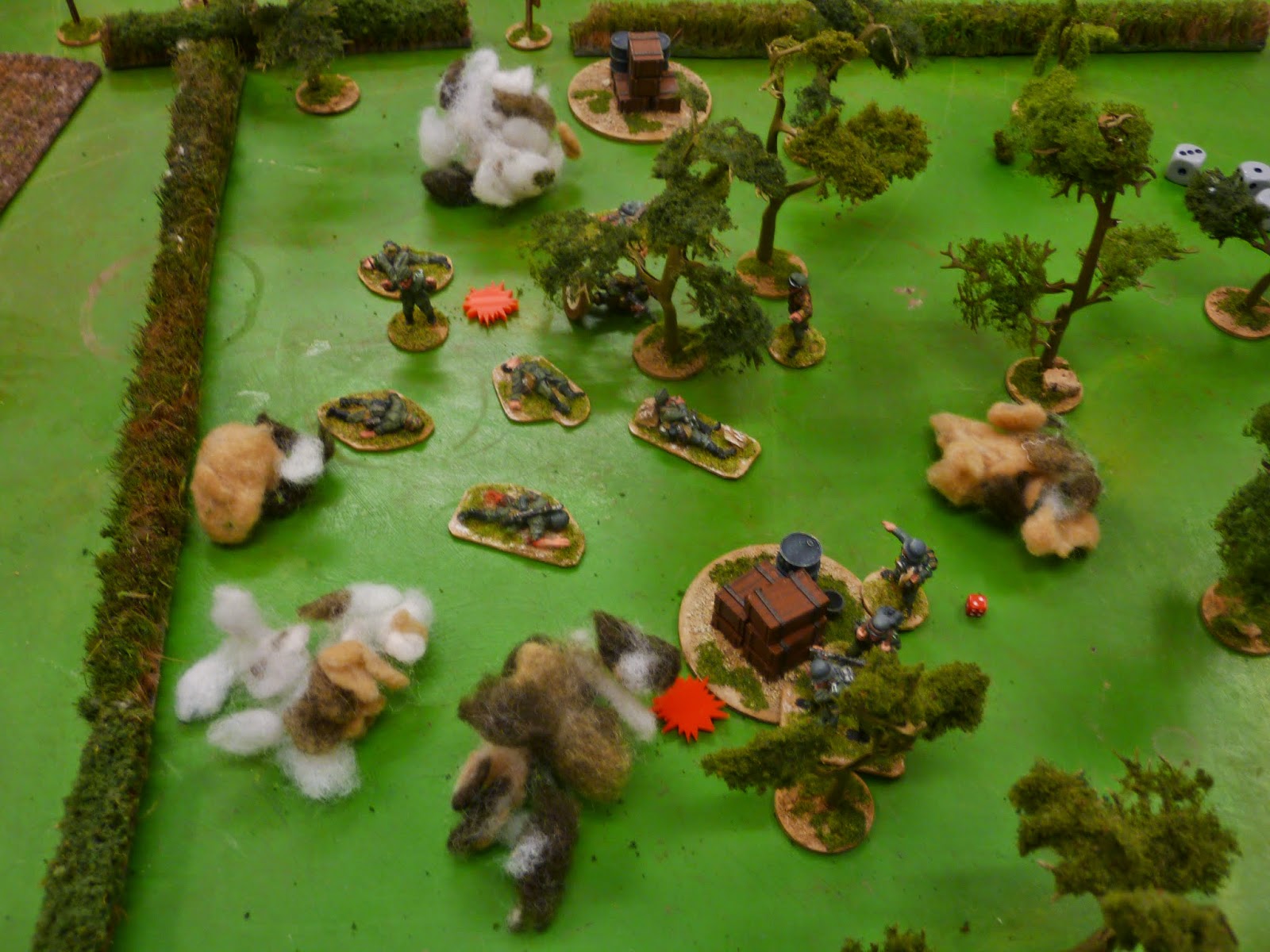 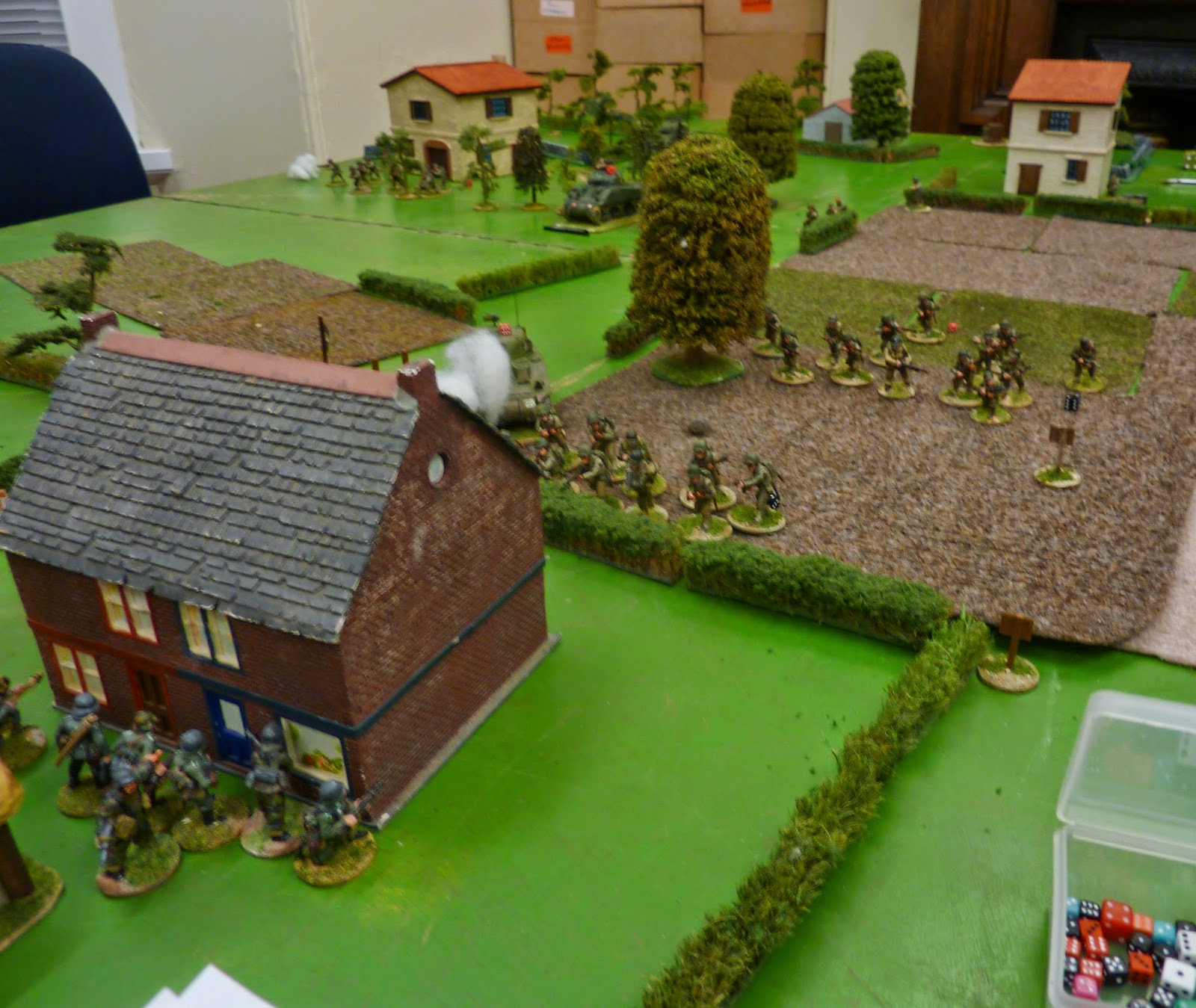 This is an attempt at a write up of the first 3 games of our newly started "29 Lets Go" campaign.  Nathan did well holding for 3 days, aided it must be said by amazing dice rolls in games one and two.  Game three came apart for him when Colin managed to get three phases in a row after his Shermans had survived shots from an 88, Panzerfaust and Panzerschreck all in the same phase.  The heavy fire from the mortars and three Shermans proved too much for the Germans, who pulled out before they were wiped out.

All the best, I will hopefully put up some more later on this week.