And now for something completely different!

Last weekend was spent down in sunny Cornwall, annoying my mother and visiting the Classic Air Force museum at St Mawgan.  Its not the best advertised attraction but is well worth a visit if your in the area.  The staff are very helpful and pleasant, which is always a bonus.
There are a selection of aircraft kept there, mostly post World War 2.  First thing that grabs your attention is a VC-10K3 tanker aircraft.  Massive doesn't really cover it, that is my 6' stepfather walking beside the wheels.  You can get a guided tour of the aircraft as well, which is a true plane of the 60's with thousands of dials in the cockpit.

Other aircraft on display include a Venom, a Hunter, a BAC 1-11, Meteor, Harrier, Rapide, Chipmunk etc.  All in all a lovely collection and well worth the entrance price. 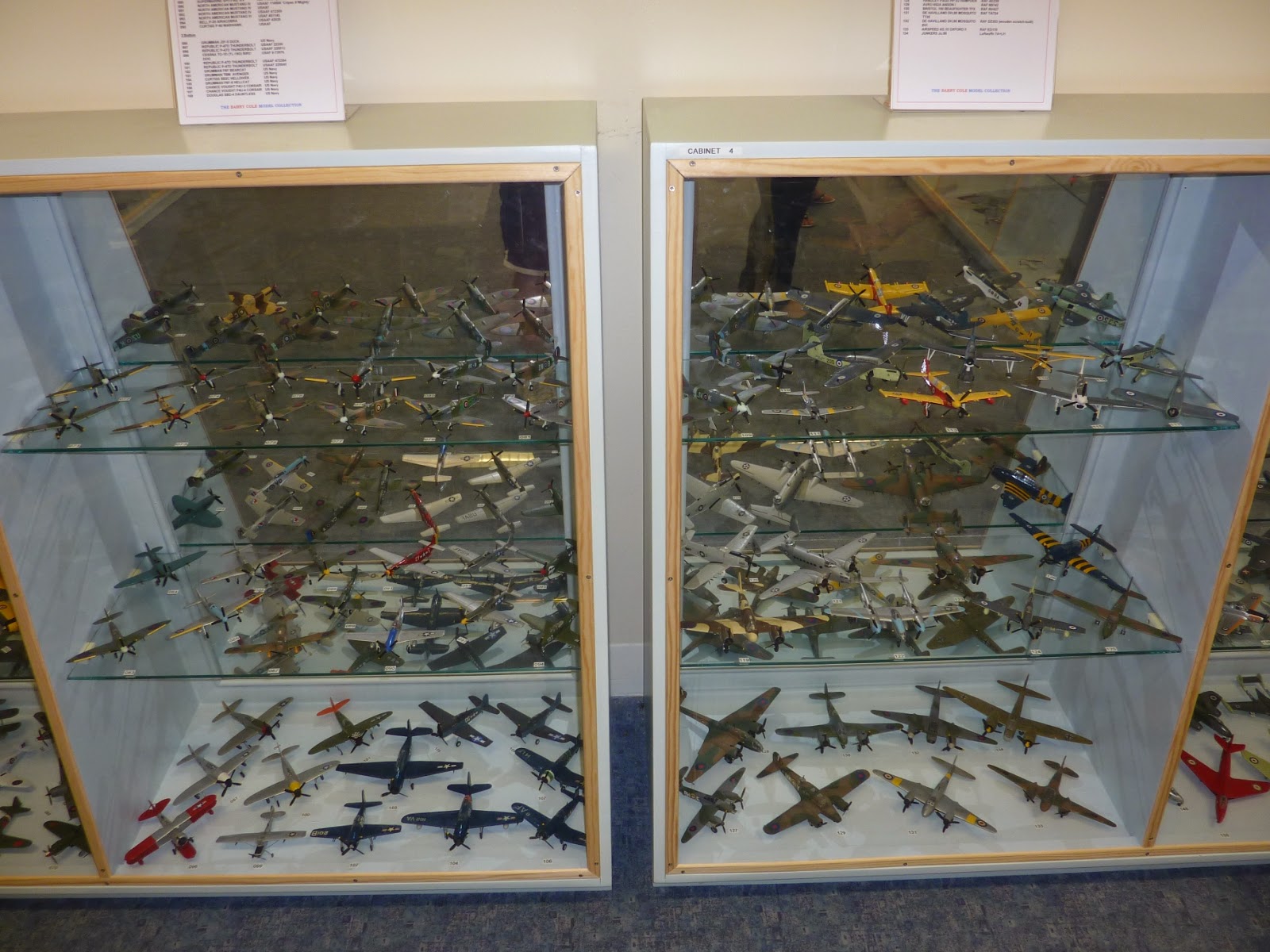 In a small room in the display hanger is a ridiculous model aircraft collection, the vast majority of which came from one man's widow.  There are over 300 models on display and, apparently, another 400 still in storage.  Here are a few pictures of what is a staggering collection.  Puts my figure collection to shame really. 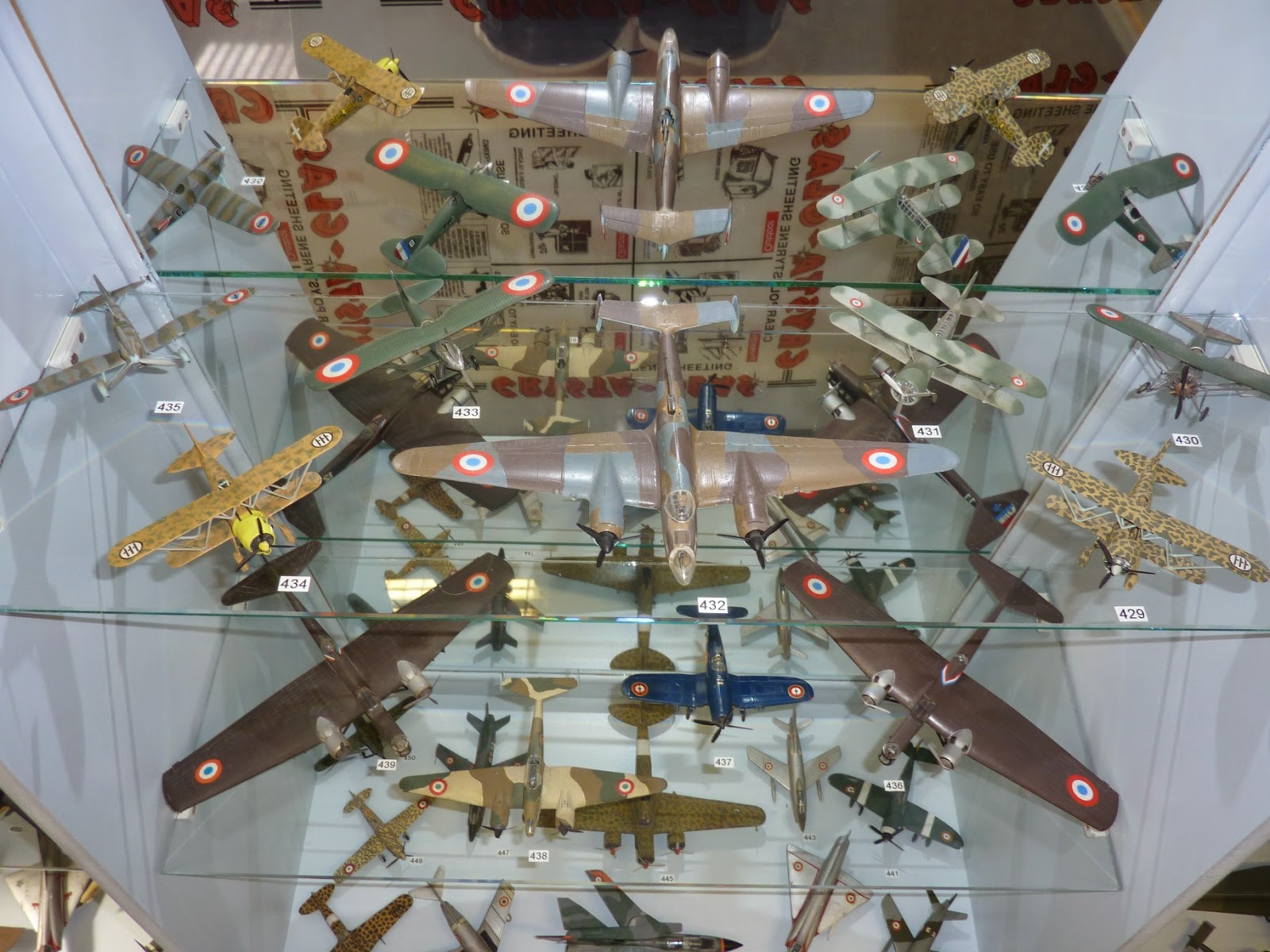 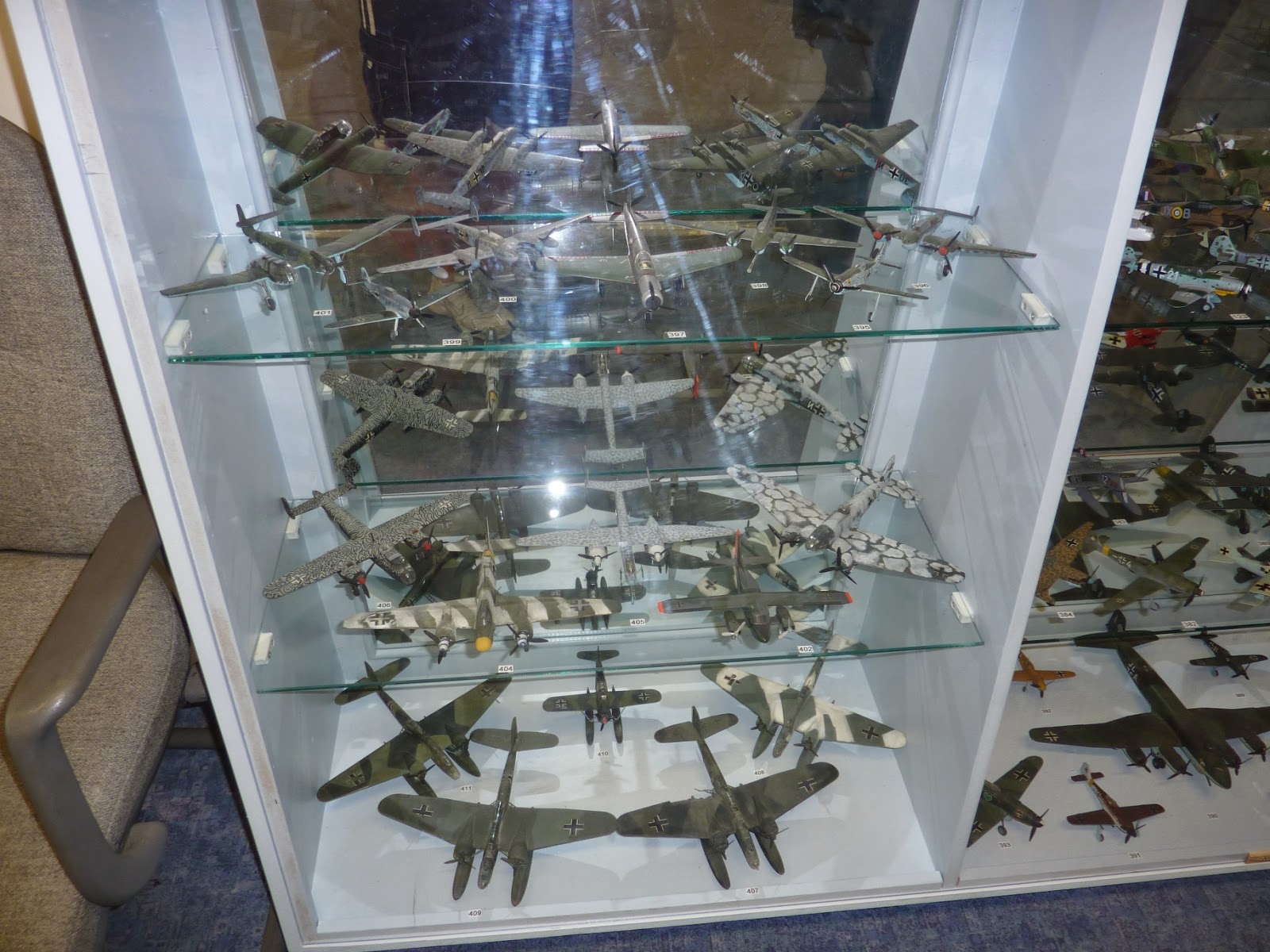 I also managed a bit of painting, finishing another unit of 18mm Napoleonic British and some 28mm Winter War Russians.  Normal service will now be resumed.

I finally managed to finish painting something.  Unfortunately is wasn't for me, but you can't have everything can you?  So, here they are, 4grounds Rorke's Drift buildings painted up for Nathan and delivered to him yesterday.

The buildings themselves were from Gus' collection, bought by Nathan and then I was talked into painting them for him.   The details on them are nice, with push out sections for loopholes and to allow passage from room to room, but so many bricks!  Biggest problem was getting the roof sections to fit properly after doing the teddybear fur thatch.  All in all I am happy with them, they took enough coats of paint to cover the mdf, which seems to have the absorbancy of a sponge.


Now all I have left to paint is a load of mealie bag defences, some boxes and 6 assorted carts.  I have put them on hold for a little while though as I am painting some 15mm Napoleonic British, because I have somehow not painted enough of the redcoated little buggers!

Have fun folks and keep rolling those damn dice.

The second Market Larden games day has now been and gone and much fun was had by all.  Thanks to the Wyvern Wargamers for hosting us all again and thanks to all those who put on games for us to play.  There were some lovely looking games on again this year, with a range of options to cater for almost every taste.  I have added a few pictures from each of the games, more of the Benouville game put on by Ade that I played against Geoff of the demon dice.

First up was 28mm Chain of Command "Le Port" put on by Too Fat Lardies Rich Clarke.  British Paras against Germans, it looked and sounded like fun.  The scenery was excellent, even if it is in the wrong scale.  ;-)  There were rumours of an overly aggressive play by the Paras, who charged down the table and pinned the Germans into a quarter in the morning session, but Nathan "Charge, charge and Charge again" Goodyear(aka Stumpy) said this was just rumour mongering from the Germans.

Next up was a beautiful game of Through the Mud and the Blood by Sidney Roundwood.  The scenery and figures were all eyecatching and I almost wished I had put down to play it just because it looked so pretty.  Pingu played Gaston, the 'ero of Paris.  They held the town but lost the wood apparently, but who cares when it looks so good?


Third table was "Saving Mrs Ryan", a Sharp Practice game by S. Walker set in the Indian Mutiny.  Yet another lovely looking game with lots of colonial infantry figures facing lots of rebellious native types.  No idea if Mrs Ryan was saved, but I hope she was.


There was another Sharp Practice game, Napoleonic Peninsular this time, by J Ibbotson.  Again it looked very good and was certainly vocal in its support.

Now a foray into the more modern era with a game of I 'aint been Nuked Mum by Nick Overland.  Lots of lovely Cold War kit on the table and it seemed to go well.
Napoleonic naval also appeared, with Kiss Me Hardy run by Nick Skinner.  The ships were beautifully painted and rigged and the kalistra hexon islands looked good with their sandy shorelines.

Loudest game of the day had to go to Omaha Beach I 'aint been Shot Mum by Mike Whittaker.  It seemed to be going well for the Allies as they broke through the wire, DD tank number 4 seemed to lead a charmed life as it shrugged of hits from all and sundry.


Now we come to the games I played in personally.  In the morning session I was lucky enough to get the Benouville Chain of Command game put on by Ade Deacon.  I had the Germans of 21 Panzer Division, tasked with recapturing the buildings and driving the British Paras back.  My forces were reasonable, with a full platoon well supported by lightly armoured (wafer thin armour) halftracks.  My opponent was Geoff "Demon Dice" Bond, whose cheerful smile covered an unnatural ability to roll 9+ on 2d6 every time he fired a PIAT.


The game went well initially, I pushed on with my plan to push up the left and outflank the British.  then a British section ran down the road on the right and, while it stood in the open, I just couldn't resist and attacked it with a 75mm pak halftrack and a full squad.  A couple of rounds firing saw the British wiped out, but at the cost of my junior leader.  Then the sneaky PIAT team used an ambush attack and damaged the halftrack too.  Meanwhile, as I pushed up the left flank with 2 squads and 2 halftracks, I came under sporadic but accurate sniper fire.  Bang, whizz, splat,  dead junior leader again.  It was looking good though, the British were down to 4 force morale and I was still on 6.

So I advanced, and that bloody PIAT ambushed again and, despite being at extreme range and firing at an obscured target, the 2cm flak halftrack was taken out without firing a shot.  My force morale plummeted to 3 and things were looking bad.

Then Geoff did it again, ambushing for a third time with his cursed PIAT and killing the previously damaged halftrack, taking my force morale down to 0 and winning the game for the British.  Every shot with the PIAT hit on a roll of 9 or more, every single shot.  Well played Geoff, well played.


The scenario was excellent, really difficult for both sides, but achievable.  Look for it in a future TFL special, I can recommend it, but only if the two players do not know what their opponent has in his force.

Thanks to Ade for all his work in setting the game up, I thoroughly enjoyed it and am now looking at getting the forces needed to put the game on myself. 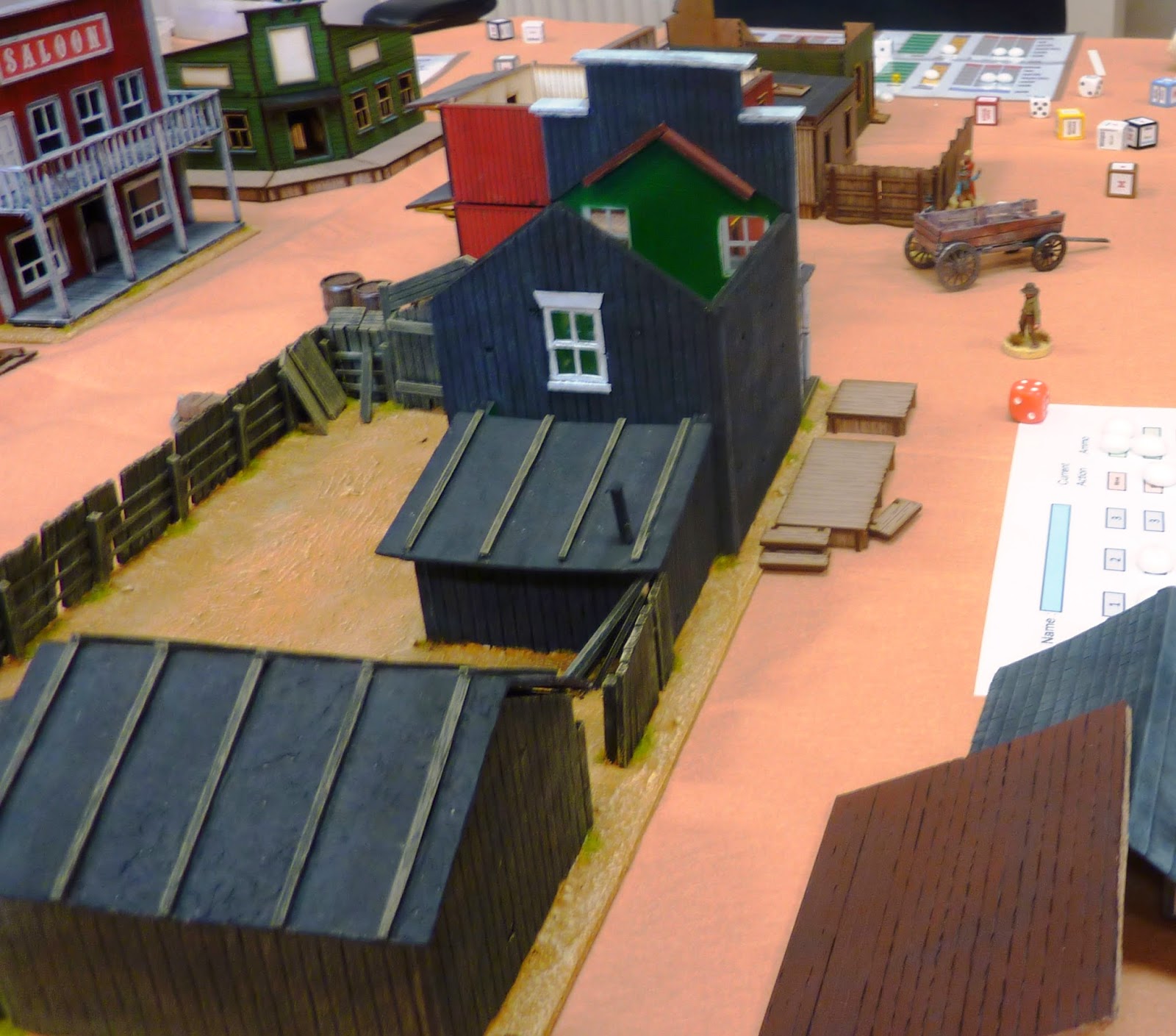 In the afternoon I played Tinstar, put on by Geoff.  His presence had totally knackered my dice rolling by now and I couldn't hit a barn door.  I fired 4 shots with a shotgun, which hits 5 out of 6 times.  I hit once.  Just once.  Nathan didn't do any better as he and Pingu traded misses with their rifles.  Unsurprisingly the evil sheriff managed to get his "witness" to the courthouse, but by then 5 out of 6 bandits were dead so it didn't really matter.  I enjoyed the game though and the changes to the system have improved it.  Keep up the good work Geoff.

And that's it.  After an early start, a drive up punctuated by 50mph average speed cameras and some good games with excellent company, we travelled home.  I have spent most of today recovering, but it was well worth it.  Put me down for next year Ade.

Time flies when your having fun and it fairly rattles along when your not.  I have been up and down like a yoyo for the last week or so, good days being outnumbered by bad not-so-good days unfortunately.  I am still smiling, though some days it's through gritted teeth.  I have been afflicted with stupid people lately, not through choice but through having to talk to them due to being ill.  The bad bit is I find I have a lot less patience with people now than I did before I got ill and, apparently, my comments to some of them have been "less polite" than they should have been.  In my defence I present picture number 1. 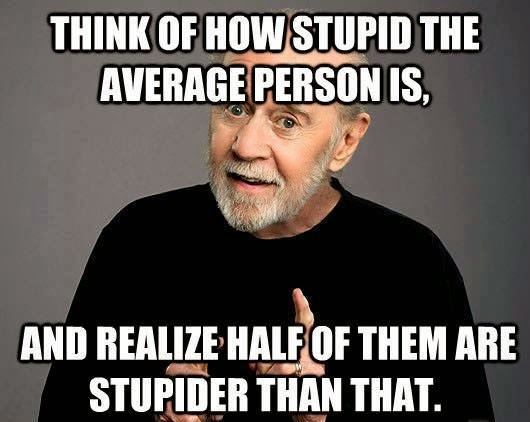 And in reply to any further complaints from said people, please refer to picture number 2. 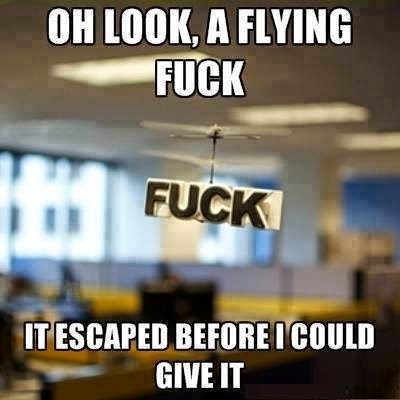 Please note that this may or may not be aimed primarily at a certain medical type person that I have had several dealings with over the last few weeks.  It appears that having a medical degree allows you to act like a complete Caring Understanding Nineties Type.  Normal service will now be resumed.

I have managed a bit of wargaming, well boardgaming to be exact.  Monday nights gaming session was of reduced numbers as Panjo, Andy and Colin were all AWOL, leaving Stumpy, Zob and myself to play the Game of Thrones boardgame.  I won as the Lannisters, but only because none of us really knew what we were doing and the other two let me capture the 7 castles I needed to achieve one of the victory conditions.  It was pretty good though and we may be playing it again tonight, but this time with more people.  Alternatively we will be playing a gangsters game if Colin has sorted it out.

Painting wise I have struggled a bit this week.  I did manage to paint up 6 Peter Pig Normandy buildings from Gus' collection.  These are going to go on ebay at some point soon.

First up is a nice pair of semidetached houses, a nice model with a stone chimney at the rear.


Then there is a pleasant farmhouse, a more ramshackle looking building but it has some very nice features.

The third building is a pair of shops, one with a nice poster advert on the end.  The smaller one also has a shed/workshop on the rear of it.

Then we have the barn, a nice addition for the farmhouse.  The roof has a couple of holes in it and the plaster has started to crumble badly but it does look nice.


A single shop, closed up with metal shutters on the large windows is next.  Another advertisement on the wall of this one.
Last but definitely not least is the Cafe, necessary for those early morning coffee and croissant moments.


So there they are, the total output of my painting over the last week.  It has been hindered a bit by visiting out in-laws, but it is mostly my own failings that have hindered me.  Sadly finances, family and health prevented me going to Partizan yesterday.  Hopefully I will get to The Other Partizan in a couple of months.  I will be at Evesham in a few days though, sick or not, skint or not I shall be there ready to roll dice and fail to hit anything.

Keep rolling those dice folks, they can't all come up on 1's can they?

As I final thought bear this in mind.

A married man should forget his mistakes.
There is no point in two people remembering the same thing!
Posted by jcralls at 11:00 No comments: