So its now February and I figured I should keep you posted on what I have been doing. The big project for 2012 has been (drum roll please) 6mm Seven Years War! Talk about a bolt out of the blue. I have had a load of Baccus figures for several years, just sat there gathering dust in a draw. Then along comes Mark Sims with a set of grand scale rules to fight big battles on hex tables. So I have started painting! So far there are 8 units of foot and 5 of cavalry for the French, with 6 British and 2 Hanoverian foot, plus 2 British cavalry awaiting basing. The plan is to do the forces for the Allied right flank at Minden, so I need another 3 units of infantry and 5 of cavalry for the allies, plus 7 Saxon infantry and 10 French cavalry.

It's nice to have a plan.

I have also had a game of Warhammer Hystericals Waterloo rules. Nice book, shame about the apparent lack of playtesting. Cuirassiers are well nigh invulnerable to musket fire as most shots hit on 6's, but then you have to reroll 6's! So you need 36 dice of shooting to get 1 hit on average. Artillery rules the table though, devastating anything in front of it. Shame as the basic system works, especially the Tac points idea. We will give it another go, but it would be nice if they supported the rules they produce. 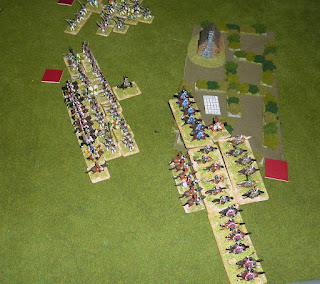 The Monday night group are still fighting their way through the first turn of a Napoleonics campaign set in Spain. The bloodthirsty bunch pretty much went on an all out offensive, with 3 battles being fought over the first week. In the first 2 battles neither side wanted to retreat after the first day, so both have been fought for a second day. In the first the French emerged as winners because they could reinforce and the Portuguese couldn't. Battle 2 is still ongoing, but the French are finding the Spanish a much harder nut to crack. Still, its all good fun.

Off to rugby now, so wish the boys luck against Tavistock. Then its off to work at Tesco tonight, oh the joy. :0)
Posted by jcralls at 10:48 No comments: