Today is supposed to be the day I go to University College Hospital London to see a professor of gastroenterology.  Except they cancelled.  The day before I was due to go there!

Apparently the appointment was booked with the wrong doctor, so basically it was "sod off tube boy".  How exactly can they book it with the wrong frigging doctor, his bloody name is on the referral letter for f***s sake.  Pissed off does not begin to cover it and we are now waiting to hear from them to see who I am seeing and when.  After all, it's only my life they are messing about with, it's only been three and a half years now.

I am seriously fed up with it all at the moment, so planned posts are on hold or scrapped altogether.  When I get my head together again I will return, but it may take a week or two.

And it's raining outside, typical British summer. 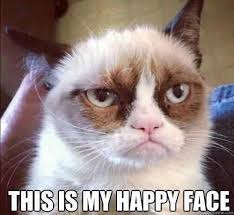 I'm still here, unluckily for some.  Sorry for the lack of posts, I have been struggling for a while with being ill for so long and it all got on top of me for a few days weeks months.  Still not back to normal, but things are better than they have been for a while.  Still being sick, still got stomach ache, still feel like crap, but I am off to University College Hospital in London on Thursday to see a new specialist so hopefully things will start to get sorted sooner rather than later.

Right, enough of the miserable crap and on to the important things.  Wargames!

I have struggled to get much of anything done since my last post back in June.  My concentration is sorely lacking and my patience has left the building.  I have "made" myself do some painting, but really not felt like it to be honest.  I managed to finish off a Warlord German Grenadier platoon that I had started back in June. These are nice figures and paint up easily, even with my level of skill. 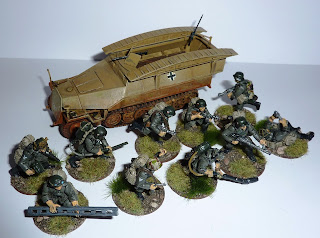 I also got an engineer squad and attendant Sd251 Hanomag done.  The figures are Warlord again, but from the early war set with metal "pioneer" bits added.  They look the part and the extra bits do make them different from the usual infantry figures.  The Hanomag is by Rubicon and is a cracking model.  The kit comes with parts to make the engineers Sd251/7, the ambulance variant (Sd251/8) or the command Sd251/10 with a 3.7cm PaK gun.  I can't recommend this kit highly enough, it's a beauty.

Then it was onto something new.  The bunch of reprobates fine upstanding chaps that I game with on a Monday night are play-testing the forthcoming "Fighting Season" rules by Too Fat Lardies.  These are designed to cover the more modern insurgency(post 2000) conflicts such as Iraq and Afghanistan and are based on the Chain of Command system, but with many differences to allow for the less rigid style of combat.  So, I have been looking at getting some figures to play it and it worked out damn expensive.  I did plan to do it all in 15mm, but the lads all moaned about it being "too small for their ageing eyes to see" and "28's look better" and so on.  So 28's it is and, in my humble opinion  the best figures out there are Empress Miniatures and Eureka Miniatures.  Sadly both are a bit out of my price range at the moment.  So I looked about and came up with a cunning plan, at least for me it's cunning!  As I like to have enough forces to play the game at home I didn't need to worry about matching in with other peoples stuff so much.  I came across this blog and saw the 1/48 models from Airfix's "Operation Herrick" range and was sold.  A quick scout on eBay and a few models were winging their way to me. 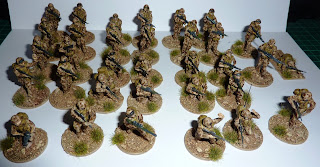 The initial purchase was an infantry patrol box and a Landrover Patrol box, which gave me 16 figures and a Snatch Landrover.  The figures are more realistically proportioned than wargames figures, but are close enough to the Empress figures that they will do.  Then a bargain appeared on eBay and I ended up ordering two more boxes, a bit larger but a lot cheaper.  These boxes gave me the extra figures I needed to make a full platoon, so here they are.  Three sections of 8 men, plus a command group of 6 and 3 "extras".  Not too bad and I am pretty happy with how they have come out.

The other bits in the bigger boxes included a pair of Landrover WMIKs, so I put one of those together as well. 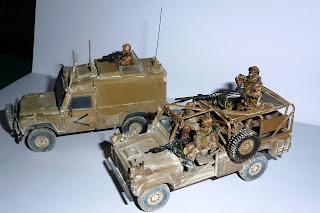 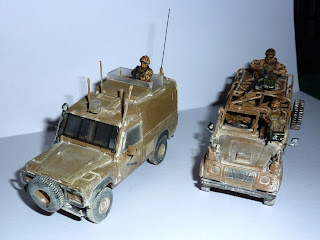 Here are the 2 Landies, ready for action.  I had picked up the vehicle crew box as well, which gave me the crew for the WMIK and a spare figure for the Snatch.  Airfix models have certainly improved from my youth, the level of detail on these kits in amazing, even down to the mesh in the glass being replicated with decals.  I have some stowage to add to these from Red Zebra Models.  Very quickly delivered and beautifully cast, they will add that "lived in" look.

The final part of the boxes contents is a Lynx helicopter!  I was a bit concerned about this model as it is rated as a "5" for difficulty and it's been a few years since I have made anything approaching that level of complexity.  The instructions and parts are great though and it went together really well I think.  The WMIK was quite a complex model with 57 steps and 80+ parts, but the Lynx blew it out of the water.  There are 100 steps in the instructions and over 200 parts, plus over 150 decals.  I have modelled it as landed and with one door mounted GPMG.  It was quite a job to get it done, but I am fairly happy with it and hope it will be off use as an objective or something in the game at some point.  And yes, I do have another one to make at a (much) later date.  The price was too good to turn down, each box (8 men, 1 WMIK and 1 Lynx) cost £15!  An Infantry Patrol box(8 men) is about £10, so the price was definitely right. 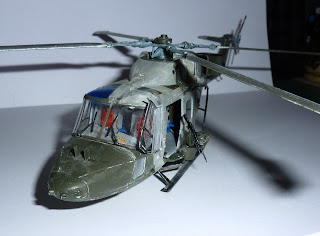 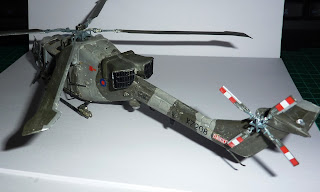 Still to be made is the 2nd Lynx, another WMIK and I also have a Jackal to do.  And I would like a Warrior at some point....or maybe two. ;-)

So there it is.  I will post again soon with a few pictures from the little bit of gaming I have managed over the last few months, but that's your lot for now.  Catch you all later.
Posted by jcralls at 23:22 8 comments: