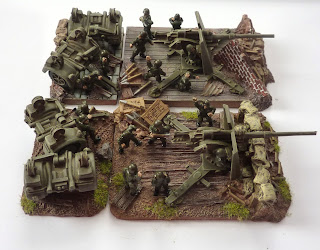 Here are the nearly finished Flak 88's.  Painted in US green with American crews, which seems a bit odd but it's what the customer wanted.  Battlefront guns, Peter Pig crew and Kerr & King bases.  Biggest pain was getting the crew glued on after removing their bases, but they seem to be holding ok now.

I am also doing a pair of Pak 43's in the same scheme.  The bases and crew are all done, but I am still waiting for the guns.  The last part of the order is a P-47 Thunderbolt fighter.  It's almost finished, as you can see.  Just some weathering and decals to do. 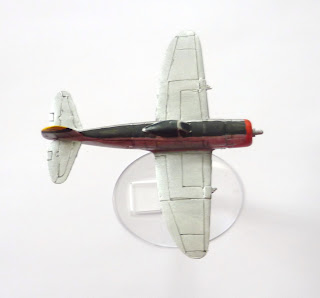 I finished watching Prometheus and found it to be entertaining enough.  Its a reasonable way to waste a couple of hours anyway.  Deep joy of work at Tesco tonight, but needs must and all that.

Catch you all later.


PS.  For some reason I can post on my blog, but I can't reply to any comments.  So cheers Gaz, at least somebody is reading this drivel.

If you do get onto World of Tanks, I play on Friday evenings from 7.30 until about 9.  Hopefully see you there.
Posted by jcralls at 13:37