A couple of weeks ago I got treated to a day out at the Tank Museum. My eldest son and his wife treated me to a ticket to Tiger Day and rather good it was too. The only running Tiger tank in the world and it's only allowed out twice a year, so it was something special. Before the tanks rumbled about we had a look around the museum as they have changed tings about since the last time I went. 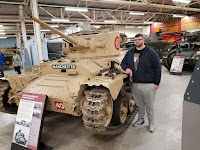 First up here is a picture of No1 next to a Valentine tank. To give it perspective he is 6' 3"(1.9m to you metric types) so it shows you how small the Valentine is, even more so when you consider it had a crew of 3 men in there. 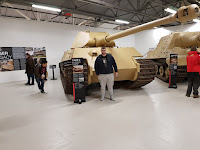 On reason to go back to the museum was to see the Tiger display, with several different Tiger variants that are not normally in this country. Here is the Panzerkampfwagen VIB Konigstiger. This beast is a true behemoth and towers over the offspring. This is an early Porsche version with the curved turret front which proved less effective than the more usual flat front Henschel version. 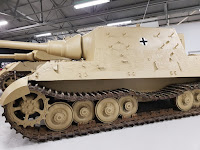 Then we had the truly oversized Jagdtiger, a tank destroyer that cost more than any tank it ever met. It is another impressive machine, but probably less effective than it was worth. 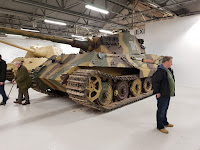 The usual Konigstiger is there as well, the flat front to the turret and the 3 colour camouflage make it stand out compared to the more drab dunkelgelb versions. This one lives at the museum full time but it was nice to see it next to its siblings. 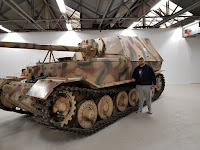 The one I really wanted to see though was the Elefant/Ferdinand SPG. In many ways this was a fatally flawed design with not even one MG to deal with enemy infantry in it's initial variant. This was later rectified but it was another over-engineered machine that drained more resources than it warranted. Still it was very nice to see it and really gives you a perspective on the size of it. The one on display still has damage to it's armour from enemy fire in WW2. 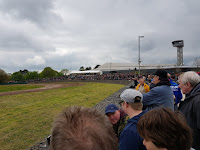 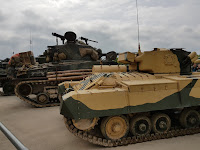 On the day they ran a nice mix of tanks, so below are a few pictures of a few of the runners. It was rather busy as well with crowds on all sides. Sadly the Matilda I wouldn't play on the day but it was entertaining to see all the others. The list included a Valentine XI, Comet, Chieftain, the "Fury" Sherman, Kettenkrad, Panzer 68, M60, Leopard 1, Leopard 2 and the Tiger!

All in all it was a great day and I had a thoroughly enjoyable time with No1 son.