Painting first. Just lately I have been playing Dux Bellorum as we decided to play it as a group game on our lads weekend to Wargames Foundry and Partizan. The rules give a decent game and it's allover fairly quickly, which is good for an evening or afternoons game.

So some Dark Ages troops have come out of storage and had paint liberally splashed all over them. First up we have 6 standard bearers and 16 assorted foot, all Gripping Beast figures with LBMS shield and banner transfers.

Then we have 26 assorted foot types, a mix of plastic and metal GB with LBMS shields again. A nice addition to my previous Dux Britanniarum forces.

After Partizan I painted up another 5 standard bearers and 13 more assorted foot. All told I have about 150 foot figures done now, with about the same number still to go. 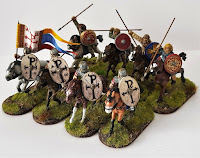 I have also painted some cavalry as a change and to give some options for my force. Firstly though I rebased the 8 I had already painted so they could all be used on the sabot bases I got from Warbases. Four each of heavy and light cavalry, a nice start for my cavalry force.

Then I painted the new additions. Somehow I had 4 mixed metal figures floating about, so they were painted along with the box of plastic Dark Ages Cavalry I had picked up. 24 should be enough for any force right?

So why do I now have 8 Footsore Romano-British Heavy Cavalry waiting to be painted? Why indeed! They are lovely figures though, really pretty.

Gaming has been a bit mixed, with several games of Dux Bellorum as mentioned previously interspersed with some games of Mythic Battles:Pantheon. Apart from that there has been not much done.

Here are a couple of pictures of our multi-player test game of Dux Bellorum. Six players, three each side with a mix of Romano-British, Welsh, Saxon and Raider forces. I won! At least that's how I remember it anyway. 😀

Finally I managed to injure myself by falling over a box in a savage shark attack! No boxes were injured in ripping the crap out of my leg, but a fair bit of skin and blood was misplaced. Stupid box.