The French are here.

Another quick post as the varnish has dried on my WW2 French platoon. The figures were a Christmas present from my long suffering wife, which I bought and she promptly stole and wrapped up back in October.

They are Bolt Action figures and, despite the lack of variety in poses, I reckon they look ok now they are painted up. 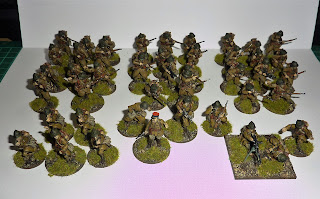 The Chain of Command French platoon has three squads of twelve men, each with an LMG and a rifle grenade(VB) launcher. The platoon HQ has two senior leaders, one junior leader and another VB launcher. The differ from other units as the VB launchers can all be gathered into a team under the HQ junior leader, thus giving the platoon its own inherent indirect fire support.

The only support team I have so far is a Hotchkiss tripod MG, although some more assets may arrive soon. 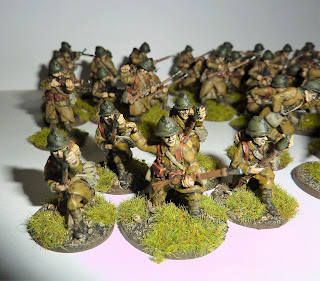 A closer look at the infantry. Not going to win any awards but at least they are all done. 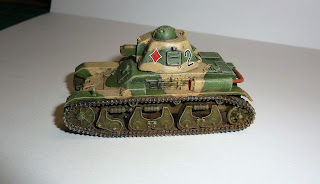 I also picked up a couple of tanks, just because I liked them. First up is a Blitzkrieg Models Renault R35, one of the most numerous tanks in the French forces. It's small. it's slow and it has a pretty feeble 37mm short barreled gun, but it does have a decent level of armour protection. 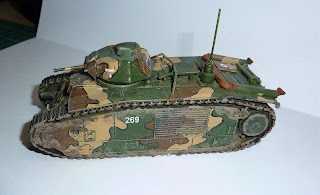 Finally for now is a Warlord Char B1 heavy tank. It's a big beast and will use up a lot of support points, but it's a pretty model.

So there you go, some opposition for my early war Germans finally. I am off now to annoy the grand children as my daughter and her family couldn't get home last night due to asshats crashing in the 1/2" of snow we had and blocking the roads. At least I can still make a cuppa.
Posted by jcralls at 08:49