Saturday was the monthly meeting of the Devon Wargames Group, which is probably the nicest gathering of lunatics you will ever find.  I managed to make it there this month, although it wiped me out for Sunday and this morning, but it was well worth it.  Two games were on this time, with Chas putting on a Kenyan game using Chain of Command.

This is the Kenyan table, British coming from the right and Communists on the left.  No idea what the scenario was as I was rather busy getting my men shot on the other table.


Here you can see some of the nasty rebellious Communist types sneakily sneaking through the bush.  Damned sneaky types!

Ah, the gallant defenders of afternoon tea, Wimbledon and cricket have quietly arrived in their armoured vehicles.  Nothing like some Saracens to pacify the rebellious locals. 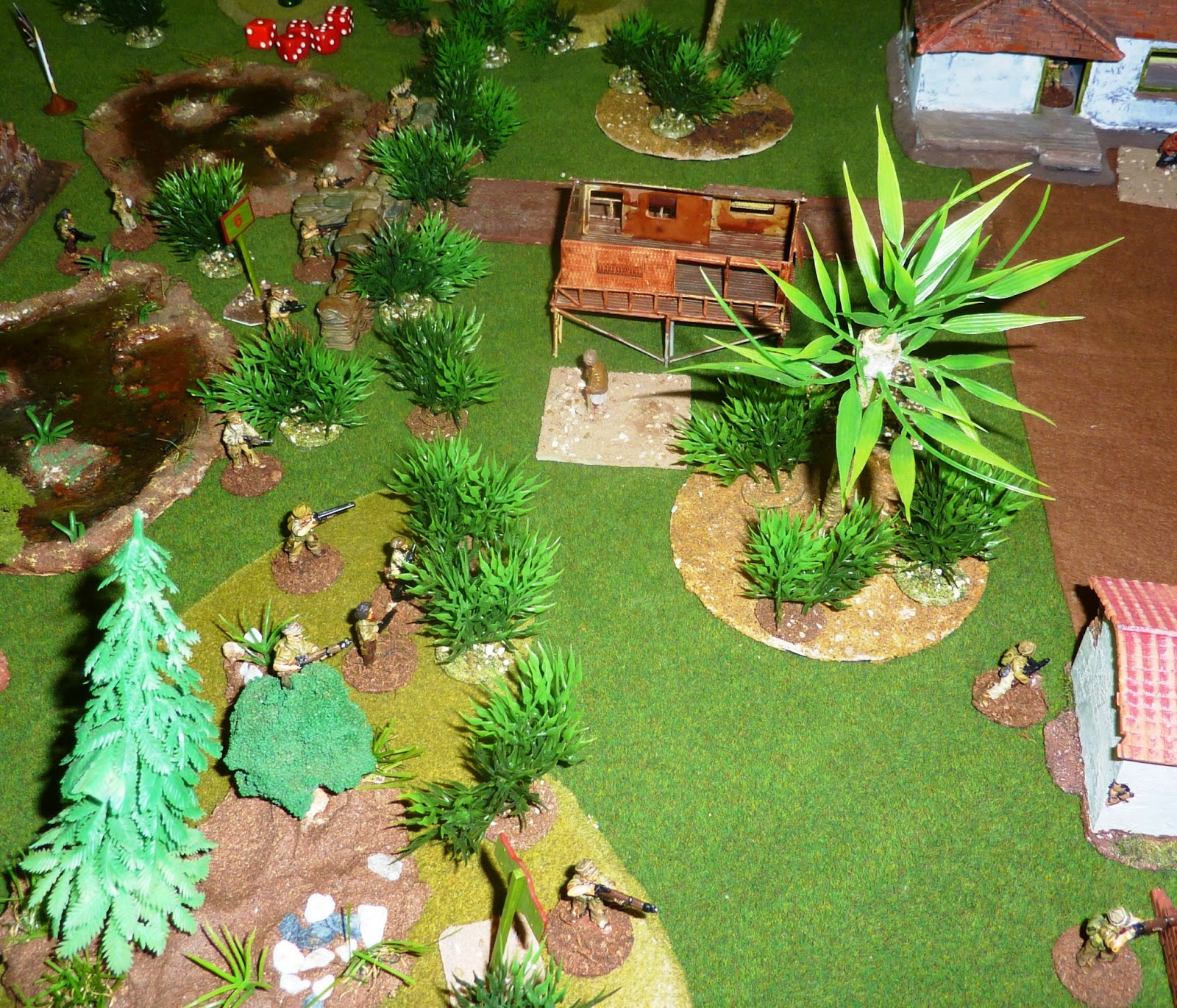 The sneaky types advance towards the village, but seemed to be slowed down by the Browning machine guns on the Saracens. 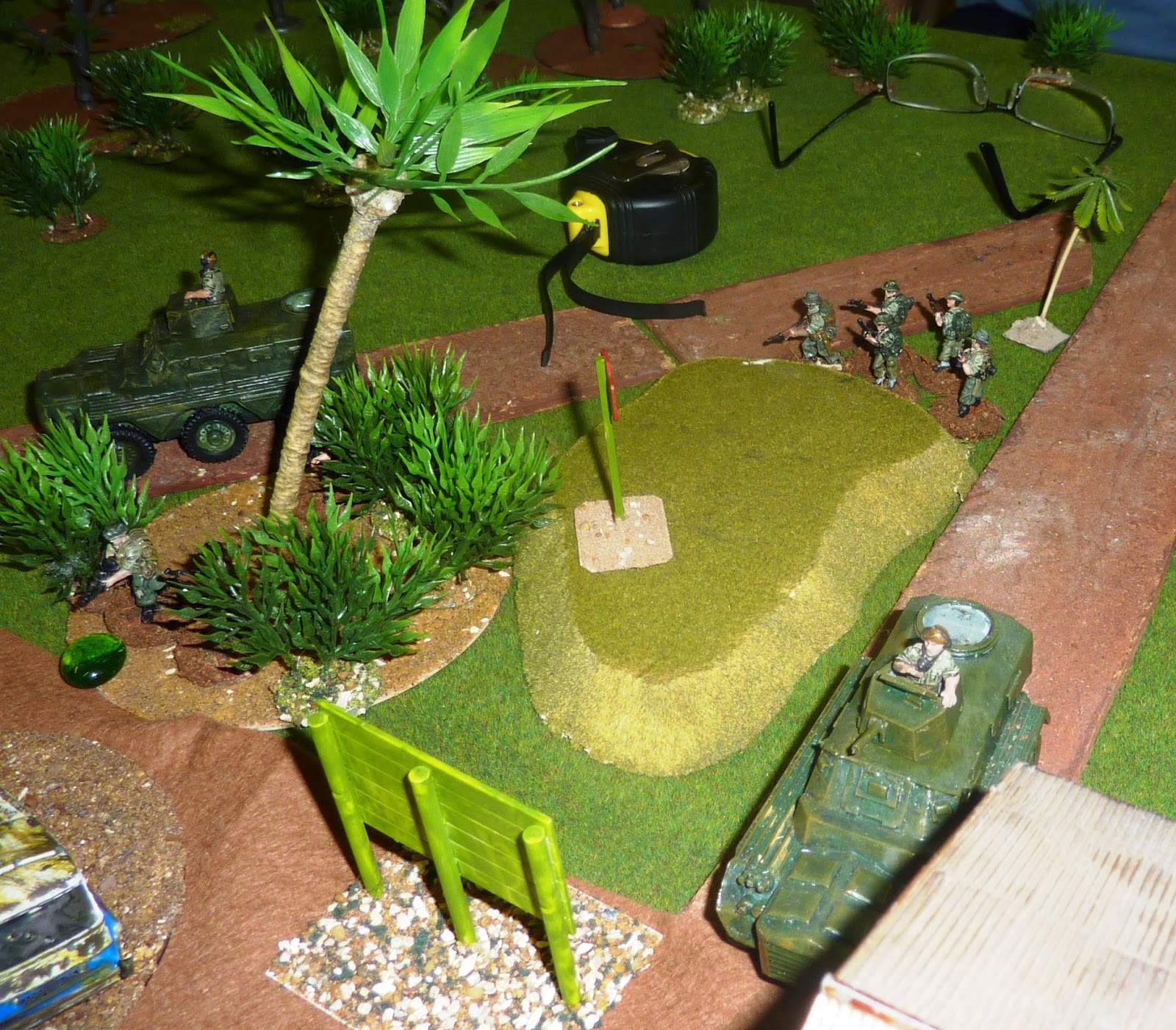 British infantry stopping for a quick brew while the Saracens win the hearts and minds of the locals by shooting them.  Those playing seemed to have a good time, which is the aim of the game at the end of the day.  Nice game Chas.


The other game was a Rorke's Drift scenario set up by Nathan "Stumpy" Goodyear.  There were two three reasons for this, he bought the buildings and figures, I painted the buildings for him and it is 50 years since the "Zulu" film was released.

Four very dodgy types commanded the British garrison.  Jon "I'm used to be indecisive" Jones was both Chard and Bromhead and commanded the defenders of the storehouse.  His command style can only be described as changeable.  In 4 turns he ordered the British to fall back to the smaller compound, then countermanded that to hold the larger hospital compound and, then, changed it back to the original plan.  It's probably best not to mention the redoubt either, which was noticeable in its absence.

Here is CinC JJ deploying some of the thin red line as my son Michael "Where's all me troops gone" looks on.

The other British commanders were Michael, Charlie and Nathan.   Michael defended the mealie bag wall behind the hospital as Sergeant Windridge and his command was let down badly by the actions of his immediate superior, Colour Sergeant Bourne!  Charlie was defending the hospital as CS Bourne and, following a markedly exaggerated report to JJ, he was given 4 of Michael's men to bolster his defence.  This came back to sting the Brits as Charlies sector was the most secure of all the British areas and Michael's wasn't.  Nathan commanded Surgeon-Major Reynolds and a small detachment of soldiers tasked with building the redoubt.  The less said about this the better, unless your a Zulu when you should mention it repeatedly. 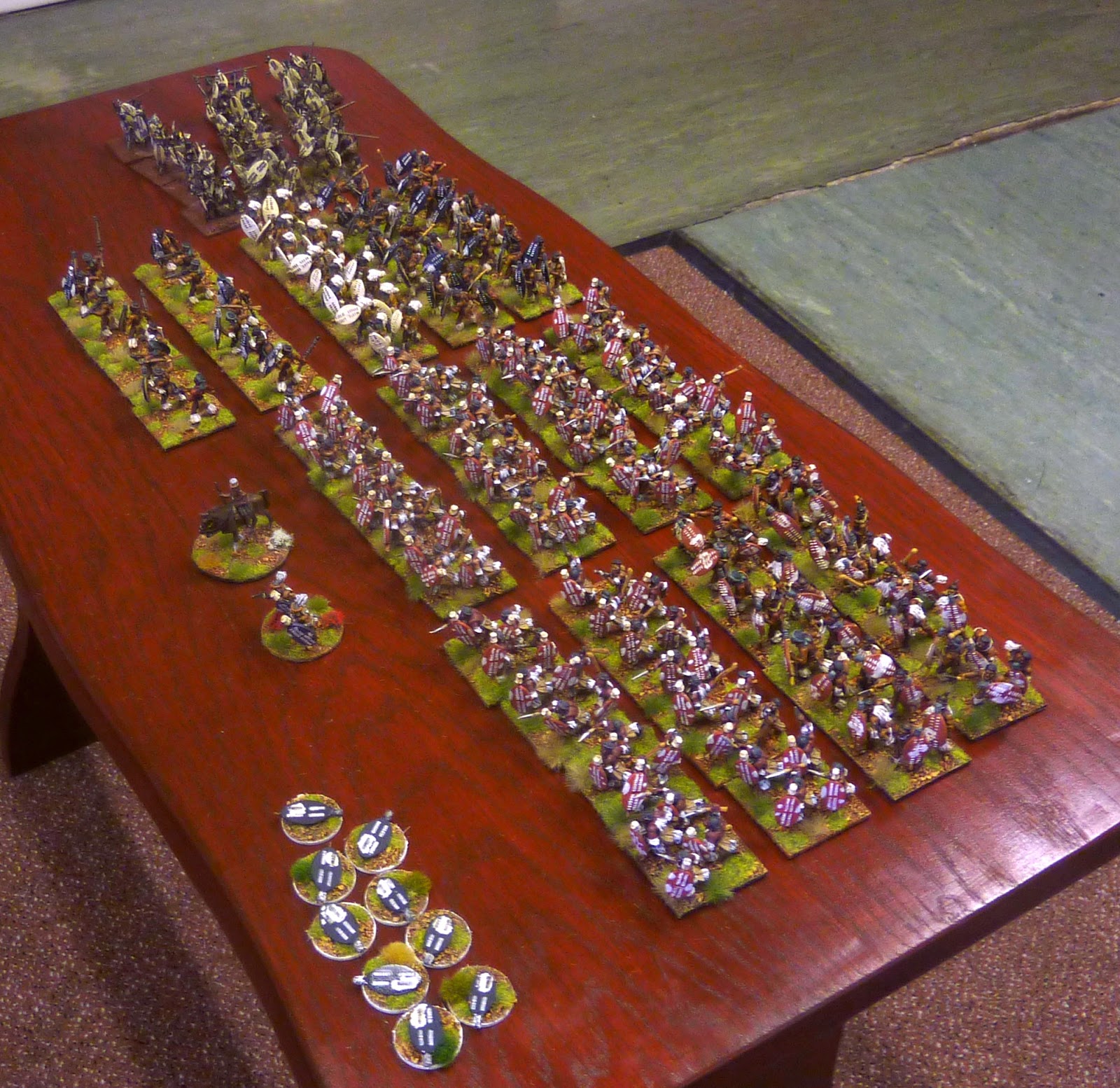 Speaking of Zulu', here they are in all their glory.  Not really enough for the assault so we had to recycle them, but it looked good on the table.  The four Zulu commanders split the forces evenly and then attacked from both sides.

Here is the thin line under Sgt Windridge.  The building behind them is the hospital, which didn't burn down.

Reynolds operates on some poor soul as the soldiers prepare to not build a redoubt.  The building is the store, which did burn down through a slight accident by a "Bloody Englishman" in the roof.  Nobody told him that thatch would burn, honest they didn't.

Zulus' farsands of them.  Well, a few anyway.  This was my first wave, which was very badly treated by the damned Redcoats.

A look at the south wall as the Zulus close in.  Despite the best efforts of the Zulu indunas the British fire was very effective and many brave warriors fell as the advanced.

At least some reached the defences, where the sharp steel of the European bayonets was a match for that of the Zulu iklwas.

Oops, where have all the Zulu's gone?  The rules worked very well, with the larger Zulu units being gradually worn down by attritional fire before being broken at the wall,  but usually they managed to take a couple of Redcoats with them.

the north side, where the store was swarmed quickly, but as the British had decided to burn all the supplies the Zulu's were forced to go around it.  Damned sneaky those British!

The 2nd (or 3rd) wave of Zulu's breaches the defences, but was driven back by some devastating fire followed by a charge of rallied redcoats.  In the background you can see Reynolds finishing off, ahem, healing the wounded.

Too many cameras.  Here we have Charlie, Jack, Michael and JJ.  I'm not sure how many photos were taken, but there is a nice report on the DWG blog by JJ.  Hopefully we will see Jacks photos too.

More Zulu's advance as the flanks start to collapse.  Despite being ordered to send men out of the hospital to help with the defence, Colour Sergeant Bourne decided to ignore the order and kept all his troops inside.  No VC for him methinks.  It was at this point that Bromhead went down with a nasty splinter, leaving Chard to command alone. 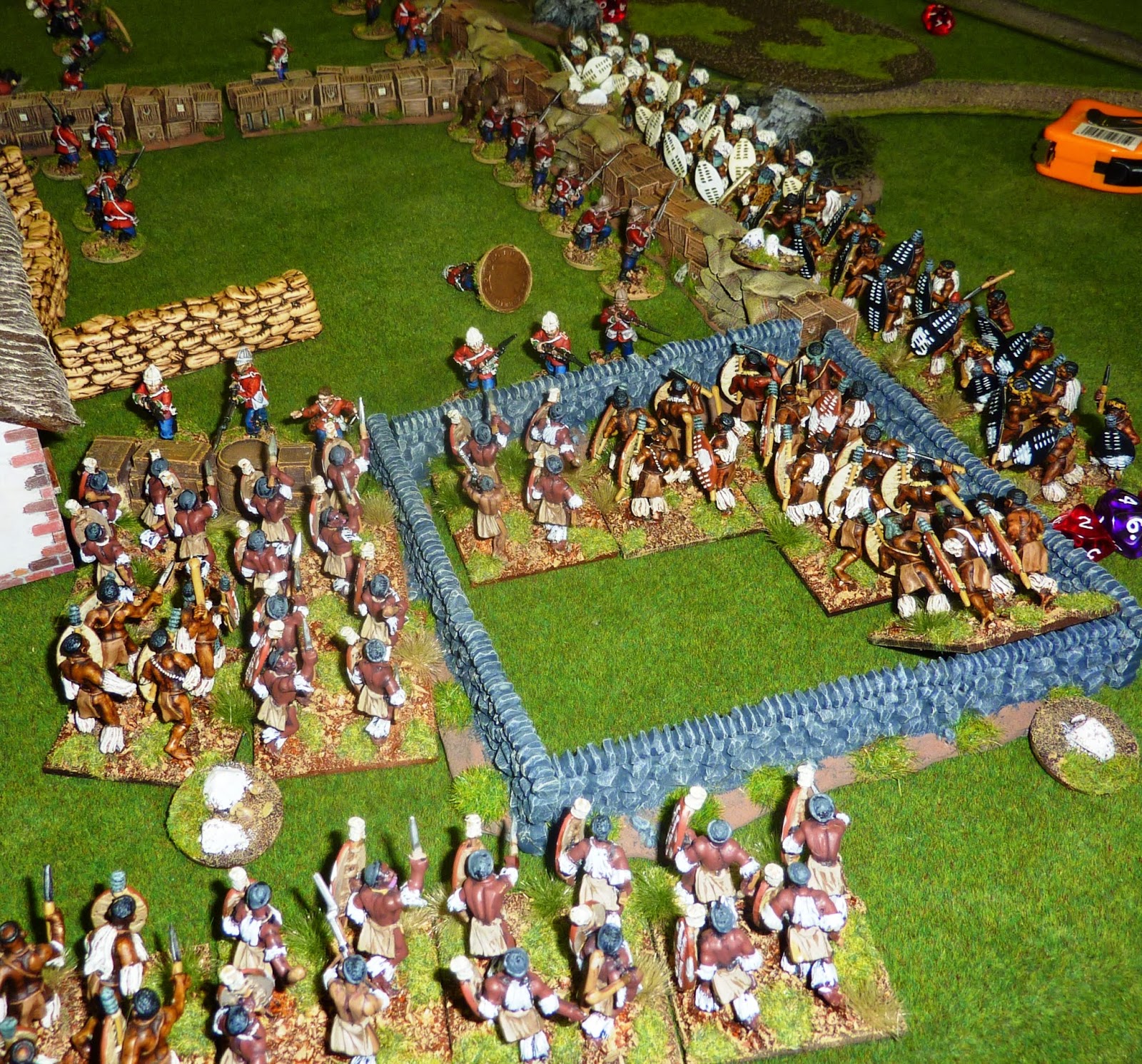 The krall is supposed to be for cattle, not Zulus.  Six gallant redcoats do their best to hold of 60 Zulu warriors.  They died where they stood, but held the wall. 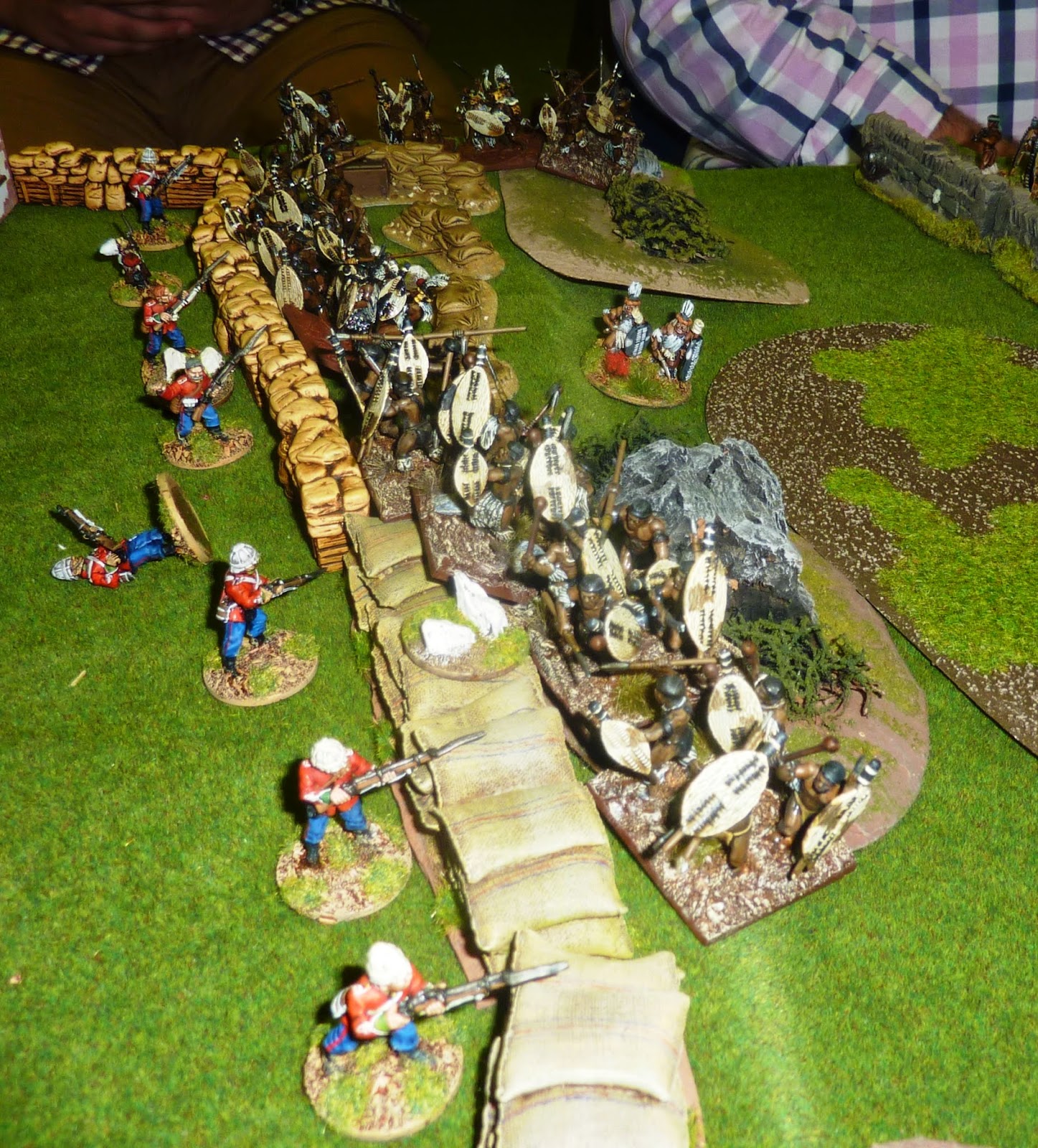 Windridge's men did their best but, lacking support and falling fast, they were pushed back from the barricade.  If only they had a few more men, but where were they?  Maybe somebody should check the hospital for any malingerers!  Now if only they had a redoubt to fall back too, that would have been nice!

The wall between the store and hospital was finally in action.  It took the Zulu's a long time to get there as Charlies fire dice were damned good, whittling down several waves of attackers before they could get to charge.  the action ended as the Zulu's fell back to lick their wounds.  The British had held out again, but with horrendous losses of well over 50%.  Thanks to Nathan for putting the game on and everybody else for playing it so well.  A thoroughly enjoyable game.  Now get painting so we can do Isandlwana!

Talking of painting, here is the latest offering.  A nice 4ground mdf wagon.  It took longer than I had planned as I had to try to make it look like wood planks.

Anyway, I am off now to prepare tonight Bag the Hun game.  Have fun and I'll catch you later.
Posted by jcralls at 14:21