Yesterday Gus and Nathan had another go at the AWI game for Legionary.  The armies have been tweaked a bit again to try and make it a closer game.

The Americans are attacking with 12 infantry units (9 trained, 3 conscript), 2 cavalry (1 trained and 1 conscript) and 2 artillery.  They have Great Captain, Oblique and Clerics as national characteristics.

The British have 8 infantry (3 elite and 5 trained), 1 cavalry and 3 guns.  Their characteristics are Rally to the Colours, Cadence and oblique.  We dropped lethal volleys as the last game we played saw the British smash the Americans, changing it for cadence.

The British deployed in a double line with all the elite infantry on their right and the cavalry and all the guns on the left.

The Americans deployed the conscript infantry and both cavalry on their left, facing the elite British.  The right and centre had all the regular infantry in column to speed up the advance. 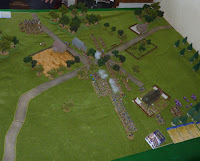 Turn two and the American infantry turned to form line and advanced to within musket range.  The British initiated the first volley phase, but both sides were suddenly shrouded in dense smoke and the fire was fairly ineffectual. The infantry unit beside the town deployed as a garrison to secure the objective.

Turn four and the remaining American gun was destroyed.  The US cavalry reformed on the flank of the British line, forming mass ready to charge.  As volley after volley thundered out along the line, the British light infantry tried to advance out of the cavalry charge arc, while the Grenadiers wheeled to try and face the charge.

Turn five and the volley phase saw a British elite unit rout, leaving a gap between the right flank and the remainder of the army.  The regular US cavalry charged into the rear of the light infantry, while the conscripts faced off against the Grenadiers.  The fight was a win for the cavalry, but not by enough to break the light infantry.  Another round of firing and one infantry unit from each side routed.  The British general made an attempt to salvage things, using a co-ordinated card to move the cavalry and rally his infantry.

Turn six and the volleys routed another British line unit, while the cavalry charged again into the back of the light infantry, routing them as well.This spelt the end for the British as they were down to a solitary army point while the Americans still had eleven of their original sixteen.
The post mortem of the battle means the British may well get lethal volleys back again, replacing cadence.  They were smashed in a very quick game, they didn't even get through the original deck of cards.  Losses were four British infantry and two notables killed against one American infantry and two guns.  Not a good day for the forces of the king!

Thanks to Nathan and Gus for playing it, allowing me to take notes and just see how things played.  One thing that did show up is that I need more trees!