Since the last update I have finished all my VBCW figures! Well, all the ones I have so far anyway. Below is a new, expanded lineup of the forces that will be fighting for the King in the Torbay area!

to the force are the Highlanders, from Musketeer again. They will form his Lordships personal bodyguard, with some form of close combat bonus hopefully. The only downside to them is the lack of a Lewis gun figure, but you can't have everything. 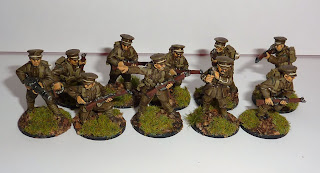 The first squad of the local yeomanry, using Musketeer WW1 British. While not as experienced as the Scots, they do get a Lewis gun as fire support.

The second squad of Yeomanry. I do like these figures, Paul Hicks is a cracking sculptor, I just wish he would do a moving Vickers team! 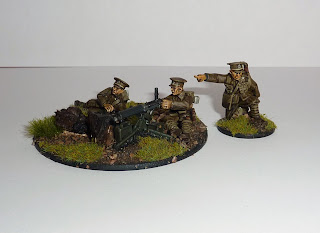 And speaking of a Vickers team, there is one of them to give some heavier support. 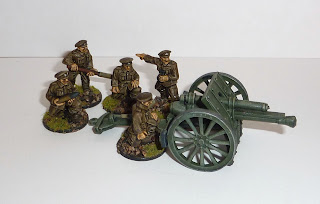 Then there is the real "Heavy" support, an 18pdr field gun from Renegade Miniatures. The crew tower over the Musketeer figures, but the price was right and they painted up nicely. 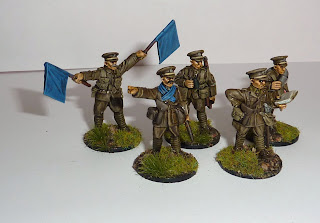 Command and control has also been improved with the creation of a command group under Major B. Lunder! 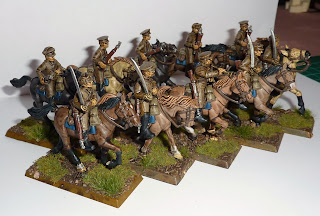 The mobile reserve, some converted Perrys ACW cavalry. Tally-Ho and all that. Unfortunately, in their first outing, they came across some machine guns and were shot to ribbons. 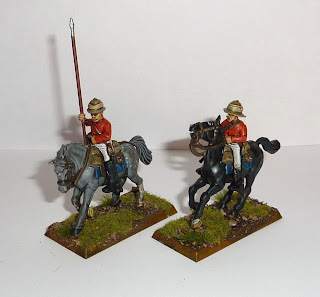 The despatch riders, the final 2 Perrys figures with different heads and nice red coats. They are supposed to be members of the local hunt pressed into service as messengers.

The Irish Brigade, just for some variation away from khaki. Nice, even if they don't get on with the Scots.

The Engineers Guard, who man the steam tanks, steam trucks, steam boats and steam trains. Some of these vehicles have yet to be purchased, but the plan is there! Their lack of machine gun is made up by having a nice submachine gun, ideal for boarding actions and the like. 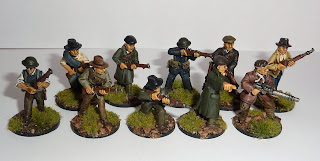 The first militia squad, making up with spirit(s) what they lack in experience. 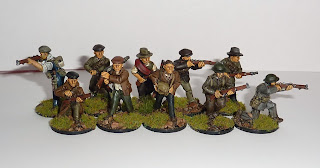 The second militia, as quantity is a quality all of its own. 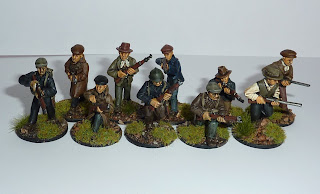 The third militia, lacking a machine gun but with a few shotguns instead. 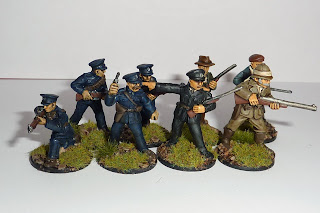 His Lordship with a few loyal retainers, including his chauffeur and the local policemen. The trusty elephant gun as been taken out of retirement and is used to put down those damned uppity commoners!


There is also the Steam Tank Truck, as seen before. The armoured support has been joined by a true Steam Tank now, once painted it will appear on here. Well, there they are in all their glory.
Posted by jcralls at 08:10