I'm officially crap at updating this!

It's now September and I last updated this blog in June! How crap am I?

Anyway, what's been going on you might ask? Life ticks along as usual, money comes in, more money goes out. No1 son is starting a health and social care course at South Devon College. No2 son is doing Sports and Fitness and is in the rugby academy at Exeter college, plus he is in the Exeter Chiefs colts. All this rugby is costing a fortune, but that's what happens I guess.

Wargaming time is taking a big hit now as the rugby is played on a Saturday and the wargames club meets on, you guessed it, Saturday. Arse!

In the last month I have mostly been painting 15mm Napoleonics. French infantry are still too numerous to count, a few units of British infantry are done and a unit of British heavy dragoons are also in the finished pile. I have also been painting a veritable horde of 15mm Falschirmjagers for Steve in Brighton. No matter what I paint, he sends more. Currently on the painting sticks are some panzerfaust stands, snipers and 7.5cm LG40 guns. Still to do are some artillery, flak guns and more pioneers.

I am also in the process of painting up a load of British vehicles for a friend in Exeter. Sherman's and carriers are awaiting decals and weathering now. 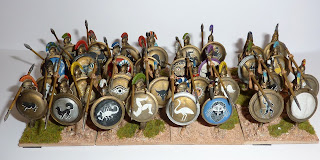 For myself I have so far painted up some of the Immortal Greeks I bought at Salute, which are very nice indeed. 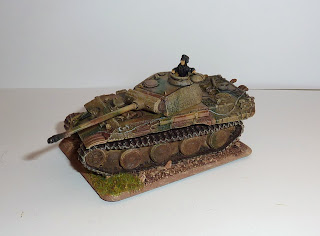 A 15mm Panther, just to give me a heavy option for my Germans 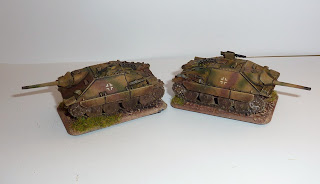 and two very nice little Hetzers, just because they look so pretty.
I also painted up my Full Thrust NSL ships, but no picture yet.

Plans, too many to list and more than I can afford! Right, off to watch some rugby on ESPN. So long and I will update before Christmas.
Posted by jcralls at 16:14