Following on from "Stinky" the steam-tank-truck, the engineer section have been busy and more vehicles have been added to the ever expanding "Torquay Armoured Royalist Troop". 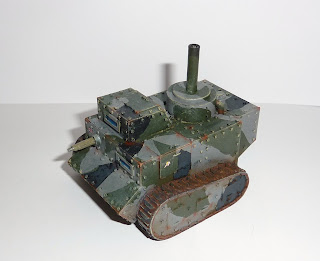 First up was "Clanker", fully tracked and amazingly slow. As a first attempt it's not bad, but vision was restricted to straight ahead, the Vickers MG was fixed, so the whole vehicle had to be aimed at the target, the tracks were found to be too small to cross ditches and the 2 man crew meant the gunner had to stoke the boiler as well. 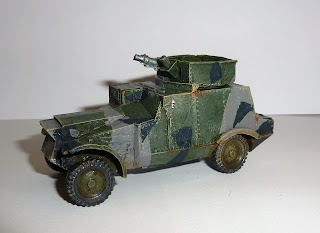 The next addition was a Morris CS-9 armoured car, gained through some dubious arms dealer contacts that the Dukes son had made. While expensive, it did give the engineers some ideas about turrets. Arriving unarmed, it some quickly fitted with a Lewis gun to give some armoured support to the mounted platoon. 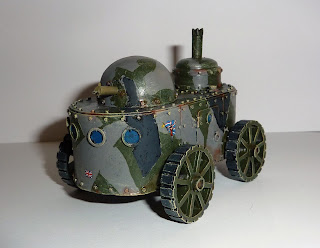 The largest vehicle made by the engineers was the "Behemouth". Using the chassis and engine of an old traction engine, the engineers constructed a veritable land battleship. With space inside for a crew of 4, well armoured and carrying a fully enclosed turret it was a vast improvement over the "Clanker". It's one weakness was the drive system, with limited cross-country ability and a real problem with tight corners. 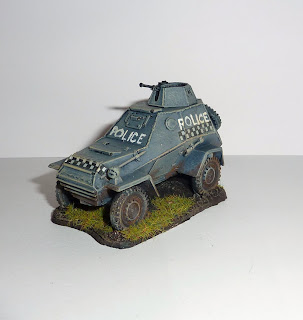 The strangest addition was a prototype armoured car seized by the harbour authorities when they boarded a Soviet cargo ship. Listed as a motor car, the armoured car found was handed over the the Torquay Police, who promptly seized it, painted it blue and used it as their anti-riot vehicle. It's fast, has 4 wheel drive and a turreted light machine gun. The only problem has been finding sufficient ammunition for the Russian machine gun. 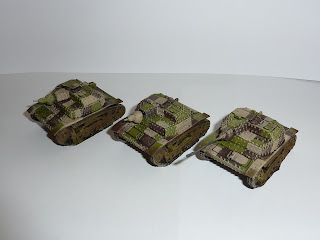 The latest, currently, addition has been a trio of Polish tankettes, from the same source as the CS-9. Costing a small fortune, the trio have proved to be most useful. Small and fast, they have proved to be almost impossible to stop simply because they are rarely spotted before firing. The 20mm cannon in one of them is also a bonus as it can knock out any enemy vehicles it meets.


So there they are. The CS-9 is from BEF Miniatures, the BA-64 and Tankettes are Bolt Action and the Steam Tanks are from Ironclad. Who says there is an arms race, not me!
Posted by jcralls at 13:14