Even more Wars of the Roses

Normal service has been resumed and I am still on project! Those who know me will tell you that this is a miracle, but the Wars of the Roses itch has still not been fully scratched.

So, forty more foot figures have joined the ever increasing throng. Some pikemen and skirmishers this time. Another six handgunners and six archers to be dismounts for my previously painted mounted archers.

To make a change from Bills and Bows I have also done two units of pikemen, along with some more command and standard bearer figures. 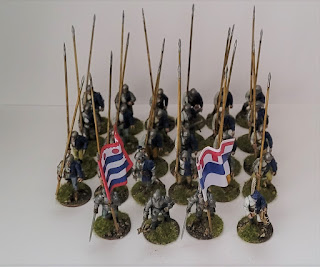 Again, these are all Perry Miniatures plastics, as that is the cheapest way of doing this period. All told I now have 36 mounted and 249 foot painted, all done since Christmas. All I have left to do is base the two cannons and crew I have sat on the table.

I now have more than enough for a game of Billhooks, with enough to give both sides some options and some variety. I think I will call it done there, based on space, time and money I will have to move on to something else. I am thinking I need to get back to my 15mm Cold War project, I still have to play a game of Battlegroup:Northag at some point and I have a lot of unpainted vehicles sat in a box calling my name.