In the local news today we had this headline.

In that report is the best "state the obvious" phrase ever. 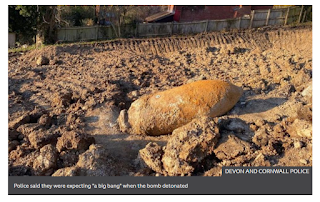 Now I for one always expect a bang when a bomb detonates, if it's a f*****g big bomb then I expect a similar size bang. In other news from Devon and Cornwall police "Water is wet" and "Rocks are hard".

The other news to mention is commiserations for the England rugby team, the RFU and all the fans. That French referee was poor and definitely got the first try wrong, possibly the second one too. However, even if you assume that he got both calls wrong that takes 14 points off the score and Wales won by 16, so thank you and well done to Wales for another Triple Crown in the year when every "expert" wrote them off. They may be playing crap, but they can win when they play crap so be afraid when they start playing well.

Normal service will be resuming with my next post when I return to wargaming and such things. More Wars of the Roses beckons.