Hello again, welcome to lockdown 2.0 and all the joy it has brought us. 😕 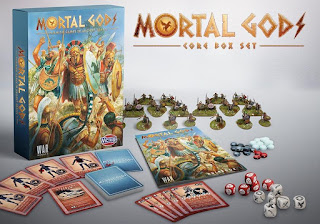 A while ago(last November) I took the offer of Mortal Gods on sale, along with the Athens and Sparta supplements. Mortal Gods is a skirmish level game, if you have not checked it out then please do so as it is a fun game and plays very well. There are much more detailed reviews elsewhere so I will leave it there. The total package should have cost £120 but the offer was for the lot for £70 so I had it, plus the Persian cards for variety. The boxes came with 76 assorted Greeks in 28mm, mostly Victrix plastic figures but the supplements each came with 3 metal figures as well.

Lockdown 1.0 gave me the chance to start assembling the figures and then paint was slapped about. To get me in the zone so to speak I started with some plastic Hoplites I bought many moons ago from Immortal Miniatures, they are now available from Warlord Games. For some reason I had 8 of these in an part-painted state for several years. So here they are to start it all off.

Then it was onto the Victrix and Footsore figures. I started off on some generic Hoplites. I did 15 in armour first, trying to vary their outfits as befits a citizen military force. The shields are all done with LBMS/Victrix decals as I am not painting that many individual shields. Also they look really nice.

Then I did some unarmoured Hoplites, same principle as the others just less protection. I did up a few as leader/heroic types as well. Plus I painted the Athenian character figures I had. So here are 9 unarmoured hoplites and 4 heroic individuals.
After the heavier troops it was time to start on some lightweight types. I may have got a bit carried away with the number of peltasts I did, but I like them in the game so I did quite a few. There are 16 of these annoying javelin men.Then it was the really light troops, some slingers and javelinmen to supplement the others. I did 6 of each as they tend to be an extra you take to make up the points. An irritant rather than a game winner.Finally so far I did some Spartans. Only 20 more figures but they have proved to be pretty tough so far. There are 9 each of armoured and unarmoured hoplites plus a couple of metal leader figures.
So there they are so far, 84 figures in total done and ready to go. I still have some more to do as Athenians (spit) but the mojo has gone for the moment. I think the lack of gaming this year has had a major effect on the productivity, it's hard to get inspired for something you can't play.
I hope you lot are having fun anyway, hopefully Christmas will bring some cheer to a pretty shite year.