Not much to see here

Hello again, it's time for another rambling post of no interest whatsoever.

I have done very little gaming over the last month, but still managed to do a little here and there. Chain of Command is still the favourite game here, so this post by Trailape is worth checking out if you are undecided about which way to go for a WW2 small action set of rules.  I have tried out both sets of rules and my preference is also for CoC.  That's not saying Bolt Action is bad, it's just a bit too much like Warhamster 40k for me.  Trailapes post also brought about a special offer from TFL, so if you are considering getting CoC, now is the time.

Purchases of lead and/or plastic have been limited by a serious lack of funds, being sick for so long has really hit the finances and belts have been tightened.  So I have bought nothing lately, but the lead mountain has grown somewhat significantly due the the amazing generosity of Gaz Amos (top bloke even if he still has a pornstar moustache).  After my previous post about Fighting Season he was kind enough to offer me some Mongrel Miniatures Arab and Syrian figures.  Assuming it was a pack or two I gratefully accepted.  A box duly arrived from deepest darkest Salford, but it was much bigger and heavier than I expected.  Opening it was like Christmas as a kid, I knew what I was expecting but what else was there.  Arab and Syrians but more of them than I expected, plus some Israelis and Congo figures from Mongrel, some US infantry from TAG and some Cold War Russians and Yanks to top it all off.  Thanks Gaz, you have restored my mojo a bit and paint has been slapped on lead for a change.

Painting has been a mixed bag, with several long delayed projects finally getting some work done to them. 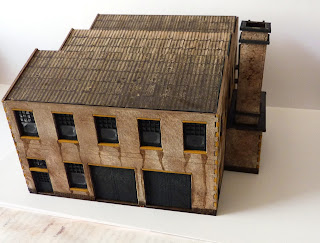 I ordered a 15mm factory from Sarissa Precision as all my buildings are residential so I wanted a change.  It came in a big bag and was a pleasure to build.  Unlike 4Ground it comes unpainted, so is a blank canvas and open to a wide range of paint schemes.  I sort of followed one that I saw on their website, except I added windows of plastic and printed off some roof tiles.  Paint was mostly from B&Q in tester pots with a few craft paints added.  All in all I think it came out pretty well and I am looking forward to seeing it dominate the table as it is 180mm square. The roof is removable and there is a walkway that the outside stairs lead up too.  I have some fencing arrived now so will be making up a yard for it, just to tie in with the other buildings I have based.

Following on from my German platoon for the Barbarossa period, I picked up a box of Battlefronts new plastic Russian infantry when we visited Battlegroup Souths show at Bovington tank museum.  They are nice figures and the box includes Maxim mg teams too, so plenty of firepower to support the Russian horde.  I did get the metal command pack as well to provide the 50mm mortar and flag bearer.   A quick check of the list for the Russian force in 1941 and the platoon was painted up.  CO(with a flag), 2IC, Commissar, 50mm mortar team and four squads of 13 men makes it a large platoon, but quite tactically rigid as the squads are not broken up into teams.  They will make a change from the Germans though, more a blunt instrument than a scalpel I think

I also picked up some support for the Russians, with some Zvezda T-26s and Plastic Soldier Company artillery.  The Maxims are from the infantry box, so the platoon is almost 100% plastic (7 metal figures out of 98).  The five T-26s are more than I will ever need for CoC, but a nice force for Battlegroup games.  Two Maxims, two 45mm AT guns and two 76mm infantry guns also gives a reasonable spread of support too. 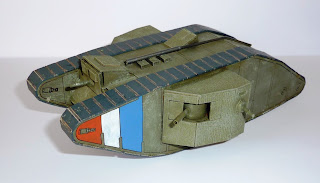 Finally I purchased a Warbases Mark I tank (just because I could) a while ago and have finally got it put together and painted up.  It will be used for my VBCW force, based on the fact that many were sent out to towns as displays after WW1 and Newton Abbot was a major train depot so had plenty of engineer types to get it up and running again.  I have tarted it up a bit from the original.  I didn't really like the square gun barrels or exhaust pipe so I replaced them with some brass tube and I also added some Lewis guns to the sponsons and in the bow, courtesy of Colonel Bills supply store.  I am happy with how it has turned out and it is a much cheaper alternative than the others out there while still making a decent replica of the original.

A final note about hospitals and such.  I am still p****d off with UCLH for the way they cancelled at the last minute, leaving us over £100 out of pocket in hotel costs.  I have now been referred to Mid Essex hospital in Chelmsford(getting further away every time) and should be there early next month to see a top man in the gastroparesis field apparently.  Fingers crossed and all that.

Catch you all later, I am off to do something less constructive for a bit.
Posted by jcralls at 11:36