Are you bored with it yet?  I hope not.  I didn't plan to get into any form of modification of Chain of Command, but the bug has bitten and it's become the project of the moment now.  So much so that, for the first time in years, I have bought figures to add to my collection.  The Russians will soon be reinforced with an Empress Miniatures AGS-17 and NSV HMG (pack CWR004).  I am also after an SPG-9, but only Eureka seem to make it and £10+postage for a gun with 3 Afghan crew that I don't want is a bit of a step too far at the moment.

I have been doing some thinking about the changes in weapons and such for the more modern period and have come up with the following thoughts.


ATGWs
To represent the difficulty with hitting a target with guided missiles, especially the earlier types such as the AT-3 Sagger, they all suffer a penalty to hit as detailed below
MCLOS Guidance(AT-3 Sagger) - Additional -2 to hit, -3 if target moving
SACLOS Guidance (AT-4, AT-5 Milan) - Additional -1 to hit

ATGWs may be bought as off table support due to their long range.  These  can fire at any vehicle visible from your table edge, counting the range as band 3.  This is really the only option to use some ATGWs in the game, the Sagger has a minimum range of 166"!

Automatic Grenade Launchers (AGS-17, Mk-19)
To represent the high rate of suppressive fire from these weapons they reduce cover by 1 level and inflict double shock.

Ammo Limits
While squads often have some form or anti-tank rocket launcher, the ammo they carried was limited.  To represent this any squad weapon, such as RPG-7, Carl Gustav etc, may only be fired 3 times in a game.

An option would be to allow reloading by sending the crew back to a jump off point maybe?

ERA Armour
Explosive Reactive Armour came about due to the increase in HEAT warheads on ATGWs and infantry anti-tank weapons.  This allows a vehicle fitted with it to reroll any dice when defending against ATGW/IATW hits in its front arc.  It has no effect on direct fire such as normal tank/gun hits.

Smoke Launchers and Layers
Smoke launchers are one-use grenade launchers that lay a smoke screen 2d6" ahead of the vehicle.  They are fired as an action by the vehicle commander.

All smoke screens last until the end of the turn.

So, there you go.  A few ideas and any thoughts and comments would be appreciated.

I have also painted something today.  Not what I was supposed too be doing (15mm Napoleonics), but I have repainted my pair of eBay "James Bond" T-55s.

This is how they looked out of the box so to speak.  Nice enough, but a bit boring. So I decided to mess them up a bit.  First thing was to see if they came apart.....

which they did.  Not exactly difficult to do, 3 screws and jobs done.  So, the next step was to repaint them with Vallejo Russian Green (cunningly named) and then give them a brown ink wash to give it some shading and pick out the detail a bit.

And here it is in its brown mess state.  I also painted the roadwheels with German Grey to represent the rubber.  Then it was out with several lighter shades such as Khaki and Dark Sand.  A decent amount of drybrushing then ensued, followed by a quick reassemble and........

here are two almost finished T-55s, nearly ready to take on the Chieftain.  All I have left to do now is some weathering with my Mig pigments and a quite coat or two of varnish and they will be finished. 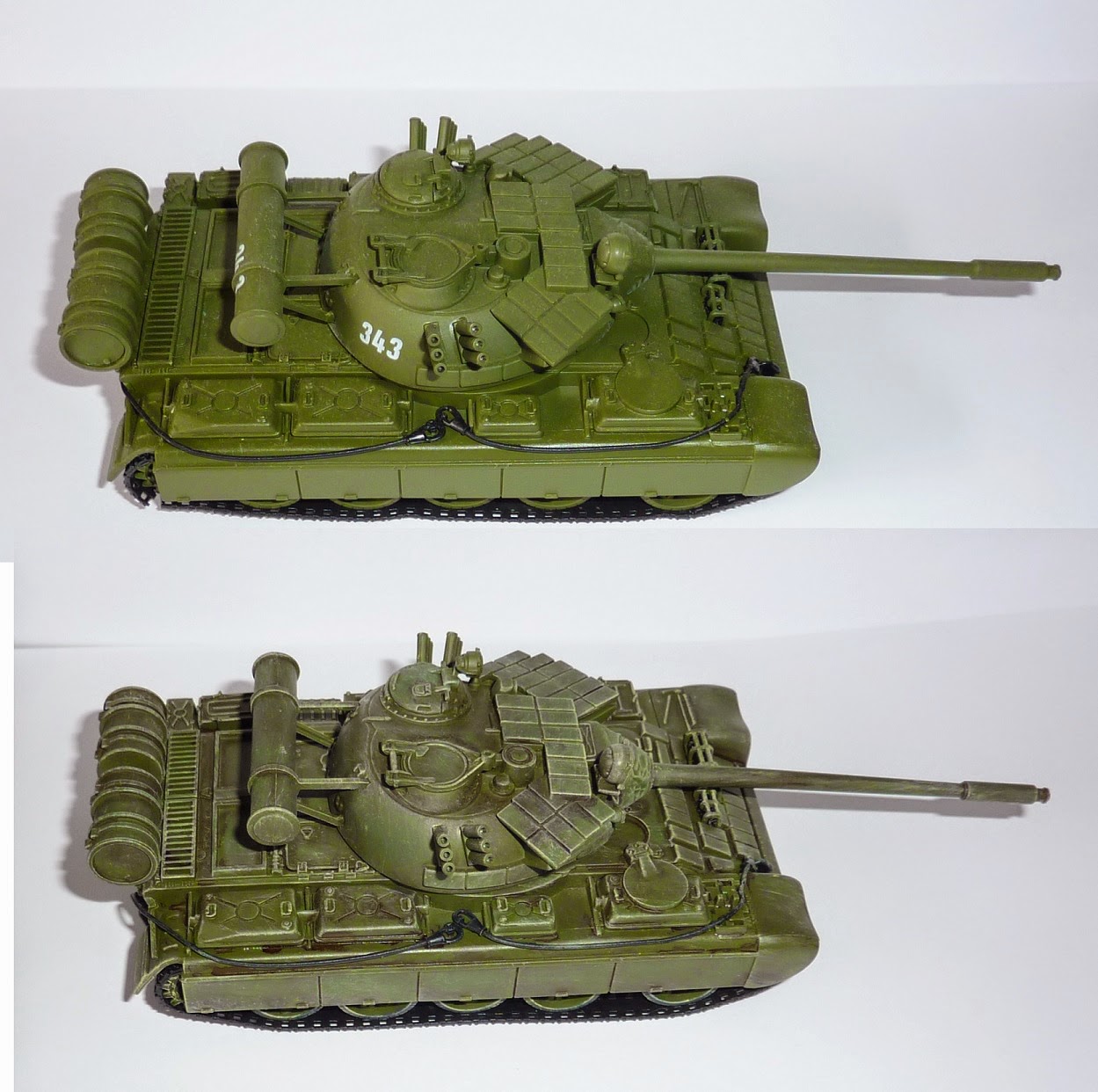 This last picture is a comparison of before and after.  It's not going to win any awards, but it looks more like a tank and less like a toy now I think

Anyway, thanks for looking and keep rolling those dice.
Posted by jcralls at 18:26