Chain of Command and 15mm Germans.

Monday nights gaming was visited by the playtest version of Too Fat Lardies Chain of Command game.  I really like the way these rules work, with rolling command dice determining what you can (or in my case cannot) do.  We had two games going on, side by side on 6'x4' tables.  I took some Germans to face Zob and Panjo's Americans, while Gus did the same against Colin and Andy's British.  I took a couple of pictures on my phone, so here they are while we wait for Zob to share the ones he took with his camera. 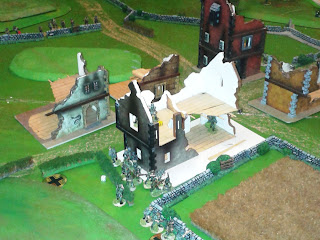 The Germans occupy the edge of the bombed hamlet, not knowing that an American 30cal MG was going to appear in the top of the red building. Tripod MGs are deadly, with lots of dice and lots of range. 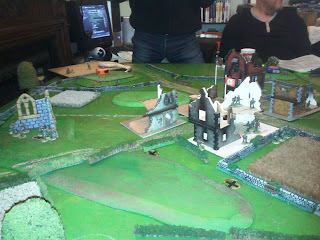 Another German squad appears, holding the ruin on the hill to secure the left flank.

The game went to pot when my "heroic" flamenwerfer team ran out into the road and fired at the American squad in the bottom of the red building.  Six dice, hitting on 4+ and causing shock or kills on 3+ resulted in 1 hit. The surprise must have stunned the Americans as their fire at my heroes was as bad as mine had been, so the flamenwerfer spat its fiery fury again.  Twelve dice this time, hitting on the same scores as last time resulted in 2 shock!  That was it for them as the Americans got over their surprise and mowed the 2 men down.  Then it became a bit of a catastrophe for the Germans as man after man fell and the commanding officer decided discretion was the better part of valour and the 15 remaining Germans withdrew. It was a good game though and we are playing it again next week, but without Panjo as he has to babysit.

Painting has got off to a good start, with the two Paks being finished off yesterday and 40 German infantry being done today.  I am about to try out my new homemade quickshade, made using guidance from Fat Wally and Dr Faust.  Wish me luck and have fun rolling your dice (hopefully better than I did last night!)
Posted by jcralls at 18:28