One fine day, many years ago, I went to a fine wargames show, located at Kelham Hall in the cold north. (yes, it is north in relation to Devon). Whilst there I was sidetracked by a man who, through devious means and a hypnotic gaze, convinced me to purchase some tiny figures for a period I knew absolutely nothing about. Then, at the other Partizan later in the year, he did it again!

So the end result was I had a mass of troops for the Marlburian period in 6mm by Mr Berry of Baccus. There are thousands of them. Cavalry, infantry, grenadiers, artillery. They are all there, and they sat in a drawer until this year. Then I was trawling the internet, as you do, and came across the Crusader Publishing site and its playtest "Great Battles Hex Rules". A spark rapidly became an inferno and, before you knew it, I was digging through drawers until I found those poor, unpainted figures that I had bought so long ago. Some bases were duly ordered from Warbases and a brush was promptly dipped into paint. Here I am, a few weeks later, wondering what the hell I have started. So far I have 8 bases of French infantry and 5 of cavalry facing off ag 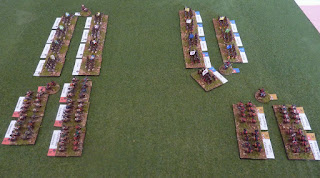 ainst 8 of Allied infantry and 4 of cavalry.

The plan is to try and replicate the forces for Minden. Not too bad you might saw, except I have worked it out to be about 40 bases of French infantry, 30 of Allied infantry and nearly 50 of cavalry for the 2 sides! That's not counting generals and artillery.

I may be here for some time.

The rules themselves are pretty good. The only things I am going to change are infantry firing at cavalry and cavalry fighting infantry. From what I have read the cavalry didn't "charge" so much as trot into combat, wit 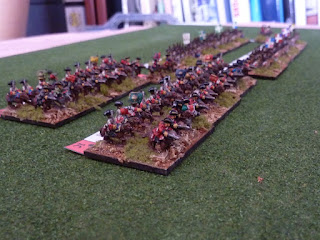 h the French seeming to trot up, fire their weapons then maybe enter melee. The British didn't fire, but still trotted as opposed to galloping.

Because of this I think it is reasonable to allow infantry to fire at charging cavalry, with full effect if the cavalry started over 3 hexes away and half effect if they were 3 hexes or closer. I am also going to try cavalry not automatically routing infantry if they win a round of combat, but instead causing extra casualties. Having read a bit about Minden, the British/Hanoverian infantry decimated 3 lines of French cavalry as they charged. Seems only fair to allow them to fire in that case doesn't it?

Anyway, there it is. I am off now to start on some 25pdrs for a chap up in the cold north. Yes, anywhere beyond Bristol is "north", get used to it. It's not my fault you are all freezing in the Arctic circle up there, we just get rain and wind down here!
Posted by jcralls at 13:28