Well it has been an interesting few weeks since I have posted anything here. This will be a brief post about what has happened with a longer post about yesterdays event to follow.
Firstly I have now had my second cataract operation and it went as well as the first. My vision is great at distance now, I only need reading glasses for up close work. Top notch service and a great result, happy days!
Secondly, we had the Clotted Lard event at the club, ably managed by the over-worked Bob who did a marvelous job herding cats, ahem I mean wargamers, to get the event sorted. He had some major problems with various games being cancelled and many people dropping out for various reasons, but he pulled it all together and a good day was had by all. I ran a Chain of Command game in the morning, based on the actions at Mirbat in 1972. It went quite badly for the SAS and local troops in my game, with numerous casualties amongst the SAS unit. The players seemed to enjoy it though, which is what it is all about. In the afternoon I played a Sharp Practice AWI game put on by the very talented Jim Ibbotson. The scenery and figures were beautiful and the game was very balanced and a lot of fun to play. Victory for the forces of the King was assured by some very good dice rolling on my co-commanders part. 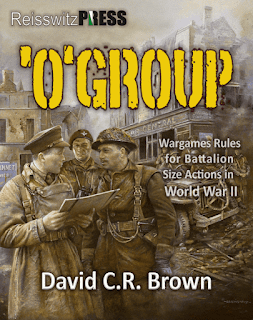 Finally, O Group has entered my gaming encyclopedia and very welcome it is too. Ian and Steve put on a game at the club and I was lucky enough to get to play it. It inspired me enough to put on a game the following Wednesday for my son and Nathan to play, to try out some more rules and units. The latest publication by Reisswitz Press, it is a battalion level game and plays very nicely. I will so no more about it today though as I am still learning how to play it properly, it's another set that is easy to learn but difficult to master. Below are a few snaps of the game I put on.

Right, thats it for now. Another update will be along soon with a report of a cracking day yesterday. Catch you later.
Posted by jcralls at 11:32