Back to 25mm WW2 figures again.

This afternoon/evening has been very productive. I don't know why but I have been painting and basing like a mad man and finished off quite a lot. Everything here has been in my unpainted pile for several months/years, so it's been quite good to get some of it done.

First up is a Warlord Blitzkrieg German infantry platoon, less the officer and mortar as I don't have them. All told it's 30 figures, all plastic and all finished. 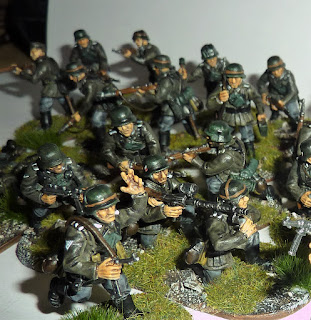 They are organised in 3 squads of 10 men, each with an NCO with MP40 SMG, a 2 man MG34 team and 7 riflemen. I really like these figures, they are nice to put together and paint up well even if you slap it on like I do. These have even had the helmet decals and NCOs rank badges added. They may well end up on eBay though, I am not doing 28mm WW2 anymore...........

I could keep them to do a Operation Sealion game though, using my VBCW figures as opposition.......

Hmm, do I order a command pack, 5cm mortar and AT rifle team then, just to complete the platoon?

Yes, I know I have no willpower thank you. 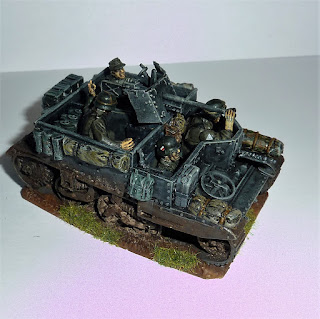 I also finished off a conversion of an old pre-Warlord Bolt Action Universal Carrier. I always liked the fact that the Germans used pretty much everything they captured from small arms up to warships. 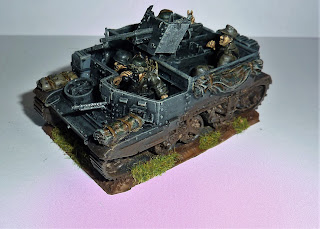 I decided to make a 3.7cm PaK 36 auf Selbstfahrlafette Bren(e), which is a long and complicated way of saying "We put a PaK 36 on the captured carrier". I got the PaK from the Rubicon Sd251 kit I made a while ago, the crew are cut up Bolt Action German grenadiers and the stowage is from my bits box and a mix of plastic and resin items.

I think it came out pretty nicely, with the crew looking a bit more dynamic than the ones in the Bolt Action kit you can buy. It's another "Should I keep it or sell it" conundrum though. 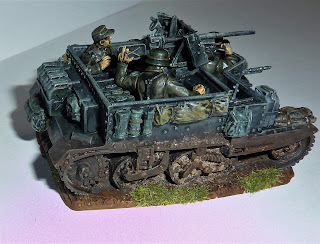 I reckon I'll keep it as it is a one off and I like how it turned out. I can always blag it into a Sealion game as captured after Dunkirk and used against it's former owners. 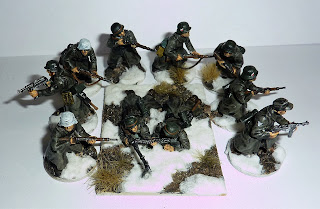 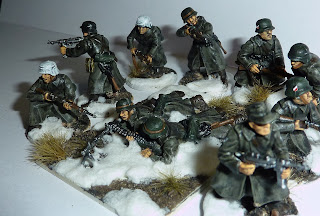 Last but by no means least, I also finished off some winterised Germans I made up with Russian greatcoat figures from the Winter Russians box by Bolt Action. A simple job of using German heads, arms, weapons and webbing and voila, a 10 man squad of troops fighting in the snow. The snow is simply a PVA and bicarbonate of soda mix, applied quite thickly and left to dry. I think it works and it is much cheaper than buying any sort of special snow basing material.

So that's it for now again. I am off to do something less productive so have fun folks. 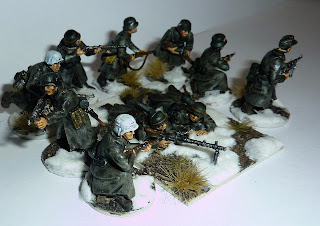